'Despicable Me 2' - the Film Content from the guide to life, the universe and everything 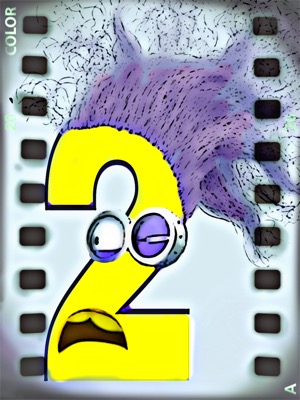 Despicable Me 2 is a CGI animated film by Illumination Entertainment in association with digital effects company Mac Guff. It was released in 2013 and is the sequel to the 2010 film Despicable Me. Like the earlier film, it was directed by Pierre Coffin and Chris Renaud and was made in France. It was a collaborative production between the USA and Europe and features music by Pharrell Williams and Heitor Pereira. It was released in 3D as well as 2D format.

Made at a cost of $79 million, Despicable Me 2 earned over $900 million in cinemas, gaining it a place among the most successful animations of all time as well as in the list of sequels that were even more popular than the original films1. It also received an Oscar nomination for Best Animated Feature and it was second only to Disney's Frozen at the Box Office in that year in the USA. Its success ensured the franchise continued - several short films were made for DVD releases, and the movie Minions appeared in cinemas in 2015. The film brought success for Pharrell Williams too, as his song 'Happy' was released as a single and received an Oscar nomination2 as well as reaching Number 1 in the charts around the world.

Following on from the events of Despicable Me, this film sees suburban villain Gru retired from the life of villainy so that he can be a full time father to his girls - his laboratory that used to develop evil schemes has been converted into a factory for making jams and jellies. Things are going well, but Mother's Day is approaching so the girls are sad. And does Gru miss the thrill of crime?

Gru had some success in his previous career as a villain, so he lives in the suburbs in a comfortable (albeit dark and spooky) house and has a big (insect-like) car plus a secret laboratory and a team of Minions devoted to helping him with his work. He adopted three orphan girls and is now their father, but is not able to be the mother they never had.

Lucy Wild is an agent for the Anti-Villain League. She has been tasked with getting insider knowledge from Gru in order to fight the villain who has developed an evil growth serum that turns anyone sprayed with it into an almost-invincible monster. A good match for Gru, as her heat ray is equal to his freeze ray, after a difficult start they begin to like one another.

Compared to the events in the earlier film, the girls are growing up. The eldest, Margo, is still studious but is becoming interested in boys, much to Gru's consternation and awakening his protective father instincts. Middle child Edith is developing her ninja skills, following in the footsteps of her grandmother, but still likes the colour pink. The youngest, Agnes, is aware that, even though Gru is a good parent to her, she still misses having a mother, and she is struggling to find inspiration for her school's Mother's Day presentation.

Dr Nefario is an evil version of inventor Q from the James Bond films. The fart gun he invented by mistake in the first film, rather than the dart gun that he had actually been instructed to invent3, is an asset to Gru, but still Dr Nefario feels his talents are not being best used.

The Minions are all clones from a genetic experiment, although some mutation occurred. They are all small domes with two arms and two legs, and they are all yellow. Some have two eyes, and some have just one eye, but they all wear goggles. Some are taller or wider than others and they have varying amounts of hair on their heads, ranging from nothing to several short strands. However, Gru and the girls have noticed that they are disappearing, one by one.

Steve Carell, known for films such as Evan Almighty, and the US version of Ricky Gervais' sitcom The Office, plays Gru with a European accent that sounds like a blend of Spanish and Russian with a dash of other languages to make him speak like a composite Bond villain.

Kristen Wiig plays Lucy as a down-to-earth young woman with a fun attitude, making her sound as adorable as the Minions find her. Kristen had a cameo in Despicable Me as the manager of the children's home who was initially charmed by Gru's Spanish but then became frosty when she realised he called her a donkey. Before Despicable Me, Kristen had various small roles in films and TV shows, but played several characters in the comedy series Saturday Night Live and provided a voice in the animated film How to Train Your Dragon.

Margo is played by Miranda Cosgrove, who appeared in the film School of Rock when she was 10 and provided voices for animated characters in the Scooby Doo and Lilo and Stitch TV series before being chosen for the role in Despicable Me. The part of Edith was the first role for Dana Gaier. Elsie Fisher had had a small role in an episode of a TV series before taking the part of Agnes when she was seven years old - her cute laugh when she was tickled was an asset for the part.

Dr Nefario is played by British comedian and actor Russell Brand, who previously appeared in St Trinian's films. Comedian Steve Coogan is best known for his role as Alan Partridge, who started life as a news reporter from the comedy TV series The Day Today, and since his cameo as Silas Ramsbottom the head of the Anti-Villain League, he has starred in films Alan Partridge and Philomena. The main villain is played by Benjamin Bratt, who previously provided a voice for the animated film Cloudy with a Chance of Meatballs. Benjamin has also taken roles in films such as Miss Congeniality and TV series including Homicide: Life on the Street and The Andromeda Strain. There is also a cameo by Ken Jeong as a hair salon owner - he had previously taken various parts in films and TV shows, including a small part as a talk show host in Despicable Me, and went on to provide a voice in the TV series spinoff of the animated film Kung Fu Panda amongst several other roles.

Most of the Minions are voiced by director Pierre Coffin, although Chris Renaud also plays some of the roles, so the Minions speak in a squeaky way with a French accent, and have their own dialect incorporating occasional recognisable English words.

An important theme is that the film was made to be shown in 3D. This influences the look of the film - for example, Gru has a long pointy nose, and the Anti-Villain League HQ has walkways across steep drops, that would look particularly good through 3D glasses. It also influences the scenes that are included - for example there is an underwater journey, and the end credits feature the Minions auditioning for the Minions movie, unfurling party blowers towards the audience and blowing bubbles.

Humour of various kinds is also important in the film, so that there is something for everyone to enjoy, from basic toilet humour arising from the Fart Gun, to comedy that would be appreciated more by adults than children, such as Gru using a device at the front of his belt to detect whether the evil growth serum is hidden inside any of various objects in a hair salon.

There is cartoon violence - Gru gets shot at once or twice, but escapes with nothing worse than darts sticking in his skin like needles, and the Minions are robust when subjected to extreme conditions. The film displays fascinating attention to detail - for example the girls' hair is impressively animated, the facial expressions clearly indicate the characters' thoughts and feelings, and the light and shadows are very realistic thanks to the efforts of a team dedicated to their creation. The backgrounds are rich in detail, too - the villain's lair is designed in Inca style in contrast to the steampunk style of Gru's home, or the minimalist style of Lucy's workplace.

As with the first film, a key theme is that the story is not a classic tale of good versus evil. Ex-villain Gru is pitted against other villains, and even Anti-Villain League agent Lucy has a villainous streak - her treatment of Gru's irritating blind date is fairly vicious, but Gru is relieved to be released from the company of a woman he had nothing in common with and gets to know Lucy better as a result. The main theme of the plot is parents and children, and also about being different but still wanting to be loved. The girls love Gru and like the fact that he is not the same as other dads, but they still wonder what it would be like to have a mother. Margo is studious and sensible, but enjoys the sensation of falling in love. Gru was bullied at school, as if he even touched a girl the other children would say he had given her 'Grooties', so he feels as though he will never be loved. When he falls in love and finds someone who loves him too it makes him very Happy4. 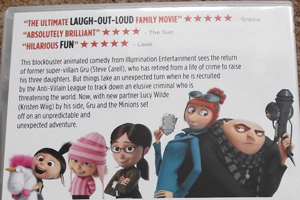 Despicable Me 2 was released on 3D Blu-Ray and DVD in 2014, including short films behind the scenes plus an audio commentary by the directors. Other releases packaged the film together with the first film, and a special edition included both films and a pair of Minion goggles for added fun. 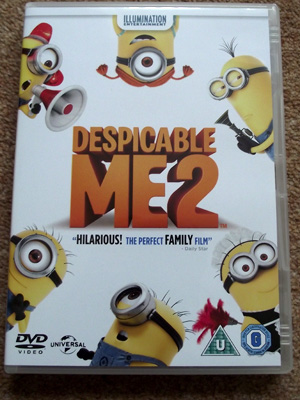 1Despicable Me cost $69 million and earned around £500 million.2'Let It Go' from Frozen took the prize.3Although the gun was equally as effective at knocking out the test subject.4So Pharrell Williams sings his song.