'Despicable Me' - the Film Content from the guide to life, the universe and everything 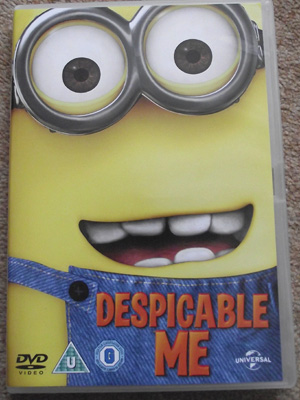 Despicable Me is a CGI animated film by Illumination Entertainment in association with digital effects company Mac Guff. It was released in 2010. Directed by Pierre Coffin and Chris Renaud, it was a collaborative production between the USA and Europe, taking two years and costing $69 million to make. Made in France and with music by Pharrell Williams and Heitor Pereira, it was released in 3D as well as 2D format. It grossed over $500 million in cinemas.

Suburban villain Gru wants to be the 'Greatest Villain of All Time' but there's a new kid in town threatening to take that title. Gru hatches a plan to get three girls to steal a Shrink Ray for him, so he can capture the Moon and hold it to ransom, but the girls have a dance recital to prepare for and want a bedtime story too. Will Gru achieve the title and his childhood dream of going into space or will he be too distracted by his Minions and the new members of his family?

Gru has had some success in his career as a villain, so he lives in the suburbs in a comfortable (albeit dark and spooky) house and has a big (insect-like) car plus a secret laboratory and a team of Minions devoted to helping him with his experiments and despicable schemes. He has always dreamed of going to the Moon, but his inability to impress his mother when he was a child led him down the path of villainy instead.

Vector is a young villain and a fan of maths, hence his villain name 'has magnitude and direction' as well as being quite similar to his real name, Victor. His dad is encouraging him to become the 'Greatest Villain of All Time', but he would rather stay at home in his modern gadget-filled house and play with computer games or sea creatures, including a shark that lives in a tank that forms the floor of his large circular living room. Apart from his high-tech home, Vector is a typical teenager, rebelling against his dad in some ways, but trying to impress him too, and seems more interested in food and TV than villain work, plus he does enjoy zooming round in his flying car.

At the start of the film, the three girls Margo, Edith and Agnes live in a children's home where they have few possessions and live under the threat of being put in a cardboard box for the day if they misbehave. They are allowed to go out by themselves and raise money by selling cookies door to door, so they meet Gru for the first time, but he is not impressed and sends them away. Vector is more welcoming when they visit him as he likes cookies, although his first reaction was to point an entire arsenal of huge weapons at them just in case they were a threat. That gives Gru the idea to use the girls to help him steal the Shrink Ray as they can get into buildings much more easily than he could, so he adopts them.

Dr Nefario is an evil version of inventor Q from the James Bond films. A man of mature years, he is a bit deaf, so often mishears what Gru asks for, leading to comedy moments like the demonstration of a fart gun rather than the dart gun that he had actually been instructed to invent1.

The Minions are all clones from a genetic experiment, although some mutation occurred. They are all small domes with two arms and two legs, and they are all yellow. Some have two eyes, and some have just one eye. Some are taller or wider than others and they have varying amounts of hair on their heads, ranging from nothing to several short strands. They all wear denim dungarees and goggles over their eye(s).

Steve Carell, known for films such as Evan Almighty and the US version of Ricky Gervais' sitcom The Office, plays Gru with a European accent that sounds like a blend of Spanish and Russian with a dash of other languages to make him speak like a composite Bond villain.

Vector is played by Jason Segel of How I Met Your Mother fame. He is also well known for his roles in romantic comedy films such as The Five Year Engagement and Forgetting Sarah Marshall. Segel's voice captures Vector's teenage enthusiasm well.

Margo is played by Miranda Cosgrove who appeared in the film School of Rock when she was ten, and provided voices for animated characters in the Scooby Doo and Lilo and Stitch TV series before being chosen for the role in Despicable Me. The part of Edith was the first role for Dana Gaier. Elsie Fisher had had a small role in an episode of a TV series before taking the part of Agnes when she was seven - her cute laugh when she was tickled was an asset for the part.

Dr Nefario is played by British comedian and actor Russell Brand, who previously appeared in St Trinian's films, and there is also a cameo by musical film legend Julie Andrews, whose voice is almost unrecognisable as she plays Gru's grouchy mother.

Most of the Minions are voiced by director Pierre Coffin, although Chris Renaud also plays one of the roles, so the Minions speak in a squeaky way with a French accent, and have their own dialect incorporating occasional recognisable English words.

An important theme is that the film was made to be shown in 3D. This influences the look of the film - for example, Gru has a long pointy nose, and the laboratory has walkways across steep drops that would look particularly good through 3D glasses. It also influences the scenes that are included - for example, Gru and the girls ride a rollercoaster, and the end credits feature the Minions competing to see who can get furthest out into mid-air, such as by walking across a ladder, or swinging from a fishing rod.

Humour of various kinds is also important in the film, so that there is something for everyone to enjoy, from basic toilet humour arising from the Fart Gun, to comedy that would be appreciated more by adults than children, such as Gru's care of the girls winning him unwanted admiration from mothers.

There is cartoon violence - Gru gets blown up once or twice, but escapes with nothing more than singes, and the Minions are robust when subjected to strange experiments. The film displays fascinating attention to detail - for example the girls' hair is impressively animated, you can almost feel the warmth of Gru's knitted jumper, Vector's pet shark is sinisterly realistic and the facial expressions clearly indicate the characters' thoughts and feelings. The backgrounds are rich in detail, too - the Mona Lisa hangs in the girls' bedroom, Gru's sofa is made out of a huge crocodile with added upholstery, and there are suits of armour and various intricate weapons on display around the house.

A key theme is that the story is not a classic tale of good versus evil, as the villain Gru is pitted against another villain, and even the girls are a mixture of innocence and naughtiness. The main theme of the plot, though, is parents and children, and balancing work and family. Gru is influenced by his mother, and Vector is influenced by his father. Gru as a 'parent' of his Minions is quite fair, in a villainous kind of way - he expects them to help with his experiments, but he knows them all by name, and they have a large recreation room with table tennis, computer games, food and drink to enjoy when they are not working. The girls are more of a challenge to him, as he expects them to behave like Minions and do his bidding, so he struggles to know what to do when they say 'no'. However, even though they were all unsure about each other at first, the girls grow to like Gru because he is not like other people, and Gru eventually finds he enjoys their company and misses them when they are not around.

Despicable Me was released on 3D Blu-Ray and DVD in 2011, with standard packaging and also in a special edition with a 3D-effect cover. The special edition also included three bonus short films - Home Makeover, Orientation Day and Banana.

The film's success led to a sequel in 2013, Despicable Me 2, which sees Gru retired from the life of villainy so that he can be a full time father to his girls - his laboratory has been converted into a factory for making jams and jellies and things are going well, but Mother's Day is approaching and does Gru miss the thrill of crime? Another success at the box office2, it ensured the franchise continued - the Despicable Me DVD was re-released in 2014 with cover art featuring a Minion, to tie in with the movie Minions that appeared in cinemas in 2015. The 2014 DVD again includes the short films plus an audio commentary by the directors (and some Minions), and an interactive quiz game. 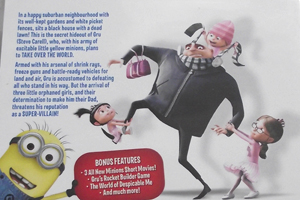 1Although the gun was equally as effective at knocking out the test subject.2And a success for Pharrell Williams too, as his song 'Happy' was released as a single and reached Number 1 in music charts around the world.