The Ultimate Illumination Entertainment Film Guide: 2010-2014 Content from the guide to life, the universe and everything 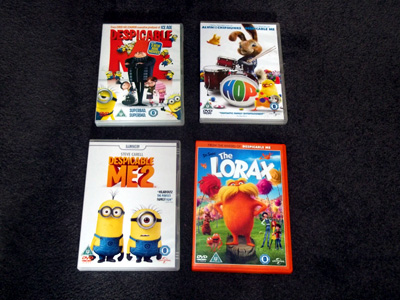 Illumination Entertainment, often called Illumination for short, is an animation production company that was founded by Chris Meledandri in 2007 for Universal Studios. They hit instant success with their very first film Despicable Me and have continued to build on this strength. In fact six of their first eight films are in the top 50 most successful animated films of all time.

Chris Meledandri is a highly-experienced producer who had not originally intended to pursue a career in animated films. After producing Cool Runnings (1993) for Disney, a film perceived as being for a family audience, Meledandri was hired by Fox to oversee their family films, including Ever After: A Cinderella Story (1998). In 1998 he administered 20th Century Fox's acquisition of Blue Sky Studios and supervised the family films they were making. Blue Sky Studios' approach was to make films on a tighter budget than rivals Disney, Pixar or DreamWorks, but they enjoyed comparatively higher international success than other animations. Meledandri believed this was because their films had a much more visual approach to storytelling that worked regardless of the viewer's native language.

Meledandri was determined to use this approach when he was headhunted by Universal Pictures to start his own animation production company. After founding it, he needed animators. With numerous rival animation studios already existing in America, he began a relationship with French animation studio, Mac Guff Ligne.

Animation studio Mac Guff Ligne was founded (as MGL Studio) in Paris in 1988 by Jacques Bled and named after the term 'MacGuffin' that Alfred Hitchcock created to describe a plot point or goal. Renamed Mac Guff in 1994, it worked as a visual effects house and had made animated television projects and films including Dragon Hunters (2008) before working on Despicable Me. Following this success, in 2011 Mac Guff was split in two; Universal bought Mac Guff's animation studio, which was renamed Illumination Mac Guff and brought under Chris Meledandri's control, while Mac Guff continues as an independent visual effects house.

In the tables below, characters and actors in Bold appear in other Illumination Entertainment films.

This film was created to have international appeal, combining slapstick comedy with a heart-warming tale of a villain discovering his fatherly side. A large part of the appeal is in the silly minions, who speak an international language, and, with their childish behaviour, appeal to children and adults everywhere. The film is also effective in 3D, and a key scene has Gru and the girls on a roller-coaster. Universal Studios also have a chain of theme parks and two years later Minion Mayhem would be a popular 3D theme park ride in which the riders are turned into minions and experience a typical day working for Gru. Kristen Wiig who plays Miss Hattie would return in the sequel as Lucy.

This is the first and so far only Illumination Entertainment film combining live-action with animation to date (2018). Although a modest success, it cost $63 million to make and made $184 million, making it the least successful film Illumination have made to date. Hop received quite poor reviews. The best stated that the plot is very predictable. Other reviews felt that the character of Carlos, a hard-working Hispanic chick who plots a coup d'état, is a racist stereotype.

Tim Hill began his career developing Spongebob Squarepants and since Muppets from Space (1999) he has become an established director of family films. He particularly has experience directing live-actions films with animated characters, such as Garfield: A Tale of Two Kitties (2006) and Alvin and the Chipmunks (2007).

The sweet factory is the most impressive seen on screen since Willy Wonka & the Chocolate Factory (1971). However, there are a lot of jokes that would not be understood by a younger audience, including references to the Playboy Mansion and KITT, the car from Knight Rider (1982-86).

During his time at Blue Sky Studios, Meledandri had developed a close working relationship with Dr Seuss' widow Audrey Geisel when making Dr Seuss' Horton Hears a Who! (2008). She had initially been reluctant to allow the making of Horton, having been disappointed by The Cat in the Hat (2003), but agreed after a year of negotiations, and ultimately enjoyed working with Meledandri. Audrey Geisel contacted Meledandri after Illumination had been founded in order to make an adaptation of The Lorax, extending the plot based on Seuss' notes. The film was released on what would have been Dr Seuss' 108th birthday.

Some changes were made to make the book into a film, including creating the characters of Ted and Audrey who care about trees in the present. These are named after Audrey and her husband in tribute. Another change was that in the book, the Once-ler's face is never seen, only green arms, although gloves are mentioned. In the film the decision was made to make the Once-ler look like a green glove-wearing human to make it apparent that the ecological destruction is the act of a normal person, not a monster.

This is Illumination Entertainment's first animated musical. Curiously, although singer Taylor Swift was cast as Audrey, she never actually sings in the film.

Dr Seuss' The Lorax cost $70 million and made $350 million. Although the least profitable Illumination Entertainment fully animated film to date, and the only one not in the top 50 most successful animated films of all time, it was still the sixth most successful animated film of the year, behind Blue Sky's Ice Age: Continental Drift, DreamWorks Animations' Madagascar 3: Europe's Most Wanted, Pixar's Brave, Disney's Wreck-It Ralph and Sony Pictures Animation's Hotel Transylvania. The film attracted controversy as, despite its strong environmental message, it was used to advertise Mazda cars across a widespread co-branding marketing campaign that even included Mazda marketing executives entering schools and giving presentations aimed at telling children to get their parents to test-drive Mazda vehicles.

Kristen Wiig had previously played Miss Hattie in Despicable Me. The villain had originally been played by Al Pacino, but when Pacino left after 'creative differences' six weeks before the film's release date, he was replaced by Benjamin Bratt. He had to match up delivering his lines to the mouth movements made for Al Pacino as there was no time to change them. Several of the background characters in Despicable Me cameo in the background here too.