Irving Berlin's Amazing Transposing Piano: Ragtime High-Tech Content from the guide to life, the universe and everything 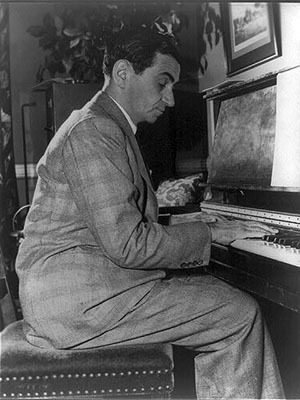 The black keys are right there, under your fingers. The key of C is for people who study music.
Irving Berlin, 1962

Irving Berlin: the hit songwriter par excellence. He wrote the songs that made the whole world sing, from 'Alexander's Ragtime Band' to 'White Christmas' to, naturally, 'I Love a Piano'. Mostly, he did it on the black keys of a piano. Irving Berlin couldn't read music. 'His' key was F-sharp. To play the scale in the key of F-sharp, start on that black key to the right of F and go up the scale from there. This is not how your piano teacher told you to do it. That's why Berlin said what he did. He wrote an awful lot of super-famous tunes using that key.

But what if the song didn't really shine in F-sharp? What if the singer couldn't hit all the notes? What if the pianist could, well, read music, and really hated the key of F-sharp1? Well, you needed to transpose the tune: put it into another key. Transposition is a complicated business. It gives piano players headaches2. But what if you could transpose the whole piano? Change keys with a flick of the wrist? What a modern idea.

21st-Century keyboardists will smile in a superior way at this point. Of course you can transpose the keyboard. Just press the right combination of buttons on your electronic device of choice. Yamahas do it all the time. What a shame those old-time musicians in the 20th Century were limited to playing those heavy, unwieldy, and totally passé acoustic pianos. They even need to be tuned.

To these smug millennials we retort: Irving Berlin (1888-1989) had a transposing mechanical piano. 'How about them apples?' as he would have said. Watch him transpose here.

How does a transposing piano work? A lever (originally a wheel) shifts the whole keyboard right or left. The keys then realign in front of the relevant strings. The pianist doesn't have to know anything about transposing, just has to pay attention to the key marker over the centre of the keyboard. The 'extra' keys disappear from view into the slots on either side of the piano. Irving Berlin could hear his songs in different keys without figuring out how to play them that way. He called it his 'trick' piano. The first one he bought in 1909 cost $100, second-hand3. Expensive at the time, but worth it.

The transposing piano was invented in the 1890s. A leading producer around the turn of the 20th Century was the Heintzman Company of Toronto, Canada, who advertised their wares with photos of leading opera singers of the day, but whose catalogue also cannily included piano dimensions and wood finish types for the discriminating homeowner. (They weren't alone: a contemporary catalogue by another firm emphasises their pianos' 'durability'.) 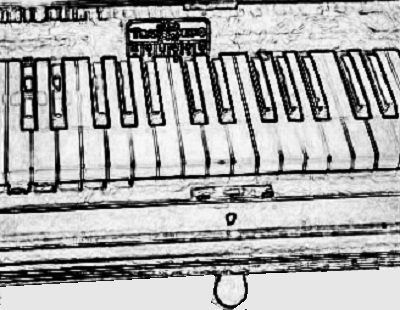 Coming up with a mechanical solution to transposition wasn't as farfetched as it might seem at first: the demand was there, from 'ear players' who often worked as accompanists in cinemas. Besides, in among the stately grands and parlour uprights, the piano companies often carried a pianola or two. Pianola? That's a 'player piano' to you. The early 1900s were surprisingly high-tech.

Berlin's transposing pianos were made by Weser Brothers, a family firm in New York City. Can you see Berlin's wonderful 1909 piano? Yes, you can. For free. Just visit the National Museum of American Jewish History (NMAJH) in Philadelphia. They bought it from Calvin Weser, and it's on display in the free-to-the-public 'Only in America' section. Berlin's 1940 Weser is now property of the Smithsonian Institution in Washington, DC.

Photograph courtesy of Library of Congress.

1The key signature for F-sharp major looks like this.2Except for the quick-and-dirty method. Lazy pianists who can read music can change keys by a half-step. They just subtract the number of sharps or flats in the key signature from 7, then play the difference in the complementary key. A 'flat' song sounds 'brighter' in sharps. A 'sharp' song sounds lower and more comfortable to a nervous church congregation, although it isn't a big difference. If you do this, you have to keep a weather eye out for accidentals (notes that are marked sharp or flat in addition to the ones in the key signature).3Source for this information: Irving Berlin letter reproduced in Owen Edwards, 'Ivory Merchant', Smithsonian Magazine, May 2008.