Sir Arthur Sullivan - Composer Content from the guide to life, the universe and everything 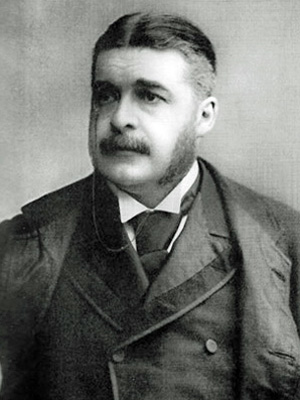 Sir Arthur Sullivan (1842 - 1900) was one of the leading composers of the Victorian age. He composed numerous hymns and other pieces, but is most famous for the comic operas he created with WS Gilbert.

Arthur Sullivan was born on May 13, 1842, the son of a bandmaster. By the time Sullivan was eight his father noticed that the young boy was unusually talented, being able to play tolerably well on any instrument in the band. Therefore after four years of preliminary education, the young Arthur was enrolled at the Chapel Royal School. He had a good voice and was often chosen to perform as a soloist. During Sullivan's three years in the choir he composed a number of anthems and songs, one of which was published in 1855. In his last year at the school Sullivan was appointed 'first boy' of the choir. When he heard of the inauguration of the Mendelssohn prize he decided to enter the competition, and was victorious. As a result he became a pupil at the Royal Academy of Music, where he studied for two years.

After leaving the Royal Academy, Sullivan enrolled at Leipzig Conservatory for further study. Under the tutelage of men such as Hauptmann and Richter he soon made rapid progress. During the period of his studies several of his compositions were performed during concerts of the institutions he attended. In particular, two of those premiered while he was at Leipzig - a string quartet and The Light of the Harem, an orchestral overture - showed Sullivan's increasing musical maturity. Leipzig was particularly important in Sullivan's progress as a practical musician, for after his time there he came to view himself as a proficient pianist. It was also in Leipzig that Sullivan made his first forays into conducting.

In 1862 Sullivan returned to London to try and make his name. After the performance of his Tempest orchestral suite he became a much-discussed new composer. It even brought him to the attention of Charles Dickens, who while admitting that he himself was not a music critic, knew he had just heard something special. Later that same year Sullivan visited Paris in Dickens' company. There he met the composer Rossini, who on hearing parts of The Tempest suite was full of praise for the young man.

Sullivan's prestige as a composer increased rapidly over the next few years. Pieces such as The Irish Symphony, Marmion and several hymns were the basis for his success. At the same time Sullivan was securing his living in London with two positions as organist. He also continued to conduct, and between 1874 and 1887 he performed regularly with the London Philharmonic Orchestra and at the Leeds Festival. However, despite the continued popularity of some of his hymns, it is not for his serious music that Sullivan is most remembered. His main talent lay in the field of the light song, and in comic opera. He himself regarded this as his lasting shame. Much of his serious work is described in this comment of Percy Fitzgerald, who said: 'they are excellent, scholarly works, but they seem to lack inspiration and are academical in style and treatment'.

The Partnership with Gilbert

Sullivan's first foray into light entertainment was based on a then-famous farce of Madison Morton. Cox and Box was produced in 1866, but Sullivan's great talent was not fully revealed until a few years later. He was first introduced to WS Gilbert in 1871 by Fred Clay, a singer. However their partnership did not begin until later than year when John Hollingshead of the Gaity Theatre commissioned a comic opera from the pair. The partnership of Gilbert and Sullivan flourished against all the odds for the next 18 years. The harmonious melding of Sullivan's memorable tunes with Gilbert's biting lyrics belied the differences between the two men.

Following the enormous success of The Pirates of Penzance in New York, Richard D'Oyly Carte, the impressario behind all Gilbert and Sullivan's operas since Trial by Jury, began to build The Savoy Theatre to home the company he had created to perform the works he produced. Shortly after this, at the end of 1879, Arthur Sullivan was knighted by Queen Victoria.

Sullivan's music is probably the most memorable ingredient in the work he created with Gilbert. Although not hugely original the music is incredibly 'hummable'. The tunes are simple, clear, unpretentious, and in the end they become entwined with Gilbert's lyrics so that it becomes impossible to think of one without the other. Sullivan's music for light opera is instantly recognisable.

The long-pending rupture between Sullivan and his partner came after the production of The Gondoliers in 1889. For several years the two men had been jealous of each other's fame, and Sullivan resented what he believed to be Gilbert's holding him back from writing his Grand Opera and serious music. The final split is said to have been caused by a carpet Richard D'Oyly Carte ordered for the Savoy Theatre. The expenses of the theatre were shared between the three men, and Gilbert believed that the price of the carpet was overly extravagant. When Sullivan found himself forced to take sides he opted to support Carte. Soon after Sullivan was informed by letter that Gilbert was putting an end to the partnership, and withdrawing all his work from circulation. Although the duo reformed briefly on two occasions, they never recaptured their glory days.

Sullivan continued to compose other smaller works throughout his partnership with Gilbert. Most notable were The Zoo, an operetta Sullivan wrote with Bolton Rowe in 1875 and produced as an afterpiece to a farce Gilbert had written, and a suite of incidental music for a performance of Shakespeare's Henry VIII. He was also commissioned to write pieces for state occasions.

Sullivan tried to break free of his tag as a 'light composer' after the end of the partnership. In 1891 he produced his only grand opera, Ivanhoe. This was Sullivan's great ambition, and he poured his talents into it throughout 1890. In spite of this the opera was a complete failure, as much through Sullivan's inability to achieve his goal as through the audiences' rejection of a style so different to that they had grown to know and love. Percy Fitzgerald described it as 'A ponderous work, more like a vast symphony protracted through several acts of an opera'. Even Sullivan came to dislike his work, commenting that, 'A cobbler should stick to his last'. Following this Sullivan created Haddon Hall with Sydney Grundy. This was a light opera based on historical fact, and was moderately successful. Following his brief reunions with Gilbert, Sullivan created a succession of mildly successful short comic operas. These, although fairly well received by the public, did not reach the heights of his earlier work.

The last years of Sullivan's life were far removed from the splendour he had known at the peak of his career. He spent a lot of time in Monte Carlo, where he gambled and drank away his money and his energy. His health vanished and he was in constant pain which not even excessive use of morphine could ease. His pain was increased by realising that this was not a fitting close to his career.

In the autumn of 1900 Sullivan contracted bronchitis, an illness his weak heart could not stand. At the time of his death D'Oyly Carte was too ill to be told of Sullivan's death, while Gilbert was away on the Continent and discovered the news in a paper. Sullivan's last two works were uncompleted at the time of his death. The Emerald Isle was subsequently completed by Edward German; both it and the Te Deum Laudamus were performed posthumously. Sir Arthur Sullivan died alone on 22 November, 1900.