'HMS Pinafore' - the Comic Opera Content from the guide to life, the universe and everything 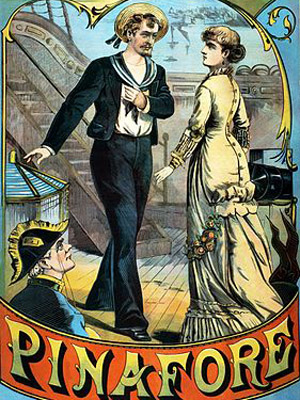 HMS Pinafore, or The Lass that Loved a Sailor was Gilbert and Sullivan's fourth collaborative comic opera. It premiered at the Opera Comique, London, in May 1878. It is a brilliant satire on the English Navy under Queen Victoria. Gilbert's wit is at its most sparkling, and Sullivan's music incorporates sly parodies of the nautical tunes of the day.

On its opening, HMS Pinafore received almost universally good reviews. Despite this it soon experienced a drop in audience numbers, probably due to an unexpected heatwave. In an attempt to counter this Sullivan arranged a suite of music from the opera and performed it at the Promenade concerts he was conducting each night. This was a huge success, London society began to talk about the opera and box office business picked up immediately.

HMS Pinafore is a two-act opera. The action takes place on the deck of the Pinafore in the course of one day and night while the ship is in dock at Portsmouth. There are seven main characters:

At the start of the opera, the crew of the Pinafore are cleaning up the ship in preparation for the imminent arrival of Sir Joseph Porter, who intends to marry Josephine, the daughter of Captain Corcoran. There are two able seaman amongst the crew: Ralph Rackstraw, who is also in love with Josephine, and Dick Deadeye, a lugubrious character who is not on good terms with the rest of the crew. The crew's work is interrupted by the arrival of 'Little Buttercup', the Bumboat woman, who goes around the harbour selling goodies to the sailors.

Later in the day Sir Joseph Porter arrives, accompanied by his many female relatives, who include Hebe, his first cousin. Josephine does not appear enamoured of her suitor, and so Ralph ventures to declare his love. Josephine rejects him because of his rank, and so he decides that the only thing left for him is death. Josephine is horrified, and to stop him admits that she really does love him. The pair plan to elope that night, aided by the crew. However, they are overheard by Dick Deadeye.

That night Little Buttercup returns to the ship, and admits to the Captain that she loves him. When he responds that he can give her nothing but friendship because of his station she leaves him, but hints that things are not always what they seem. Sir Joseph is the next to approach the Captain, complaining that Josephine does not favour his suit. The Captain suggests that his daughter is simply overawed by the First Lord's position in society, and that Sir Joseph should plead his suit by telling her that love conquers rank.

Dick Deadeye then tells the Captain of Josephine's plan to elope with Ralph, and the pair lie in wait for the conspirators. On their appearance, the Captain is so furious that he swears, and Sir Joseph banishes him to his cabin for showing such depravity before his crew. However, Little Buttercup arrives to save the situation. She reveals that she was once a nurse to two boys, one upper class, and one lower class, who she accidentally exchanged when they were babies. These two boys were Ralph Rackstraw and Captain Corcoran.

In order to sort out the situation, Sir Joseph makes Ralph captain of the Pinafore, and reduces Corcoran to the rank of able seaman, in accordance with their new social status. Of course, Sir Joseph cannot marry Josephine, the daughter of a common seaman, and so gives Ralph permission to marry her. He himself decides to marry his first cousin Hebe, while Corcoran seeks consolation in Little Buttercup.

Sullivan's score for HMS Pinafore was his most successful to this point; he took full advantage of the nautical setting, and wove in tunes that fitted it perfectly. Nowadays Sullivan's music is almost inseparable from the lyrics it was written to accompany. The melodies are incredible catchy, and yet do not overwhelm the lyric, every whit of which can reach the audience.

Each of the main characters has at least one song in which they are able to express themselves, their position and their longings. Some of these are more memorable than others. Sir Joseph Porter's opening number 'When I was a Lad' was immortalised in Jerome K Jerome's Three Men in a Boat, when the author describes Harris' attempts to sing a comic song. Other songs in the opera both glorify and ridicule the British Navy. In 'We Sail the Ocean Blue' Sullivan presents his twist on a traditional sea shanty, but in 'I'm the Captain of the Pinafore', Captain Corcoran's tendency toward sea-sickness and swearing are revealed. Other most memorable songs of the opera include 'Nevermind the Why and Wherefore', in which Sir Joseph and Captain Corcoran try to convince Josephine that love ignores rank; 'I'm Called Little Buttercup'; and the finale 'Oh Joy, Oh Rapture Unforseen'.

While writing HMS Pinafore, Gilbert spent a day roaming the decks of Nelson's ship, the HMS Victory at Portsmouth. There he took notes and sketches, and created a plan of the deck of the Pinafore. From this he was able to plan much of the stage direction before rehearsals began - not that this increased his peace of mind. Gilbert was intensely nervous about the production, and would often sit up until two or three in the morning rewriting the libretto, for which he made use of some of his 'Bab Ballards'1

In the original version of the opera the character of Hebe was supposed to have a larger part, including songs with Dick Deadeye. However, the actress Jessie Bond refused to do talking parts, creating problems with Gilbert's plotting. In consequence the version of HMS Pinafore that D'Oyly Carte produced was shorter than originally intended.

By the end of the summer the Opera Comique was packed full every night, and Richard D'Oyly Carte organised extra companies to tour England. At the same time the stage manager Richard Barker had the idea of creating a children's company to play Pinafore in London. Barker took on the role of a father figure to his juvenile company, and his production was a huge success. However, pirated versions of the opera also sprang up in New York. In order not to lose money D'Oyly Carte decided to take his company to New York. While the D'Oyly Carte Company was in America, Gilbert and Sullivan commenced work on their follow up, The Pirates of Penzance.

1Gilbert wrote these articles for the journal Fun.