'Ruddigore' - the Comic Opera Content from the guide to life, the universe and everything 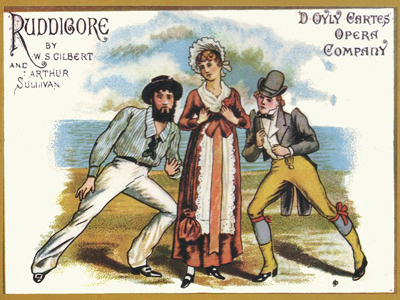 The opera itself is a strange beast. It aims pot shots at the English navy and the idea that women are attracted to wicked men and the upper classes. The main satire focuses on melodrama, but it does not have the sustained brilliance of the duo's earlier work, and Ruddigore is in places frustratingly flawed. This didn't stop Gilbert naming it as one of his three favourite pieces from his work with Sullivan, alongside The Yeoman of the Guard and Utopia.

Many of the objections to the work stemmed from the title, originally spelled Ruddygore. In exasperation Gilbert and Sullivan changed the spelling so that the word 'ruddy' (shocking at the time) did not appear, although the pronunciation remained the same. It was later revealed that Gilbert had been so infuriated by what he felt to be the irrelevance of the complaints, that he had been considering changing the name to either Kensington Gore, or Not-Half-So-Good-As-The-Mikado or Kensington Gore, or Robin and Richard were two Pretty Men. Fortunately Sullivan and D'Oyly Carte were able to prevent this.

As a parody of a melodrama, the characters and plot of Ruddigore are fairly stereotypical; the brilliance of the piece lies rather in the libretto and music. There are six major characters in the operetta:

The operetta opens in the Cornish fishing village of Rederring, with a troupe of professional bridesmaids who are out of work. They are distressed because the beautiful Rose Maybud will marry none of her suitors, since she is secretly in love with Robin Oakapple, a local farmer. The bridesmaids therefore try to persuade Rose's aunt, Dame Hannah, to marry Robin's faithful servant, old Adam, so that they do not lose their endowments. Hannah refuses, saying that she is pledged to maidenhood. She had a lover in her youth, but he turned out to be Sir Roderic Murgatroyd of Ruddigore, who wooed her under a false name. Hannah tells the girls of the curse that lies upon the lords of Ruddigore - 'Each lord of Ruddigore, despite his best endeavour, shall do one crime, or more, once every day, for ever'. If a crime is not committed the lord shall be put to death by torture.

Dame Hannah then reproaches Rose for not returning the love of any of her suitors, but Rose complains that all the men of the village are too bashful, and it would be unbecoming of her to encourage them. Rose herself is a foundling, and bases her life upon a book of etiquette that was left with her when she was a baby. Robin Oakapple enters, and he and Rose have a conversation about two 'friends' of theirs who are in love, but are afraid to confess it.

Robin is really Sir Ruthven Murgatroyd of Ruddigore, but he fled from home at the prospect of inheriting the curse, and has lived in the village of Rederring ever since. At this point Robin's foster brother Richard returns home from sea, and is promptly consulted by Robin about his love for Rose. Richard, who does everything according to the dictates of his heart, offers to speak to Rose on Robin's behalf. Of course, he promptly falls in love with her, and woos her for himself. Robin is stunned by the news of the couple's rapid engagement, and while apparently being happy for them, makes several insinuations about the unsavoury natures of sailors which cause Rose to choose him over Richard.

At this point Mad Margaret appears. She is looking for Rose, having heard that Sir Despard Murgatroyd, the current bad baronet of Ruddigore, plans to carry off Rose as one of his daily crimes. Mad Margaret is in love with Sir Despard, as all mad girls are, and so wishes to prevent such a course of events. Rose reassures Margaret that she is pledged to another.

Unfortunately for the happy couple Richard is aware of Robin's true identity, and to get revenge on his foster brother he tells Sir Despard that Robin is really his older brother Sir Ruthven Murgatroyd, the true bad baronet. Sir Despard is desperate to get rid of the curse, and so breaks up Robin's wedding by revealing the truth. Rose is distressed, but ignoring Richard, promptly offers herself in marriage to Despard. However Despard, now a virtuous young man, refuses, saying that he must keep an earlier promise to marry Margaret. Robin collapses insensible at Rose's feet.

The second act takes place in the picture gallery at Ruddigore Castle, where the walls are lined with portraits of the dead baronets. Sir Ruthven and his servant Adam are worn out by the effort of having to commit a crime everyday, and are having problems thinking up their dastardly deeds. Adam's newest idea is to poison the beer of Richard and Rose who have come up to the castle to ask for permission to marry. Sir Ruthven is not yet as bad as that, and rejects the idea. He does however threaten to imprison Rose in a dungeon, and calls for his servants. Richard promptly brandishes a small Union Jack flag, a signal that not even the Bad Baronet of Ruddigore can defy, and Rose is saved. Sir Ruthven therefore permits the two of them to marry.

As night approaches, the figures in the picture frames of the gallery begin to come to life, and the late Sir Roderic steps out of his frame and reproaches Ruthven for not fulfilling the curse. Sir Ruthven begins to make excuses: on Monday he committed no crime because it was a Bank Holiday, but on Tuesday he made a false income tax return, on Wednesday he forged his own will, and on Thursday he killed a fox... This is just not good enough for Sir Roderic, and to encourage his nephew to do better he gives Ruthven a taste of the torture to be expected if he fails in his task.

Sir Ruthven promptly orders Adam to go to the village and carry off a maiden as today's crime. Adam is replaced by Despard and Mad Margaret who now run a National School (something Despard finds very dull after ten years of wickedness), and have come to plead with Sir Ruthven to mend his wicked ways. Despard points out that although Ruthven has only been bad for a week, he is, in the eyes of the law, guilty of the crimes Despard committed in his stead for ten years.

Adam now returns, having carried off Dame Hannah for his master. Hannah promptly tries to attack Sir Ruthven with a knife. Terrified, he calls on his late uncle, Sir Roderic, to come to his aid. He recognises Hannah as his former sweetheart, and orders everyone else to leave them alone. The two have a brief moment together, before Sir Ruthven rushes back in, having had a brainwave. He believes that whilst a Baronet of Ruddigore who refuses to commit a crime must die, that refusal is itself tantamount to suicide. Since suicide is deemed a crime, the only thing he must do each day therefore is refuse to commit a crime, and his curse will be fulfilled. This is all very satisfactory, particularly since Sir Roderic should therefore not have died, and may be counted as being alive again. Roderic is then reunited with Hannah, as much as a ghost may be, and Rose returns to Sir Ruthven. Richard accepts his lot philosophically, and marries Zorah, the chief bridesmaid.

There are fewer of Gilbert and Sullivan's hit numbers in Ruddigore than in many of their other operettas. The music also received less critical acclaim than Sullivan's previous scores, perhaps because it followed the brilliance of The Mikado and is a substantially darker work. However, when the Gilbert and Sullivan society 'Savoynet' were asked to vote on their favourite numbers for a Best of... CD, three songs from the piece made the cut. These were Robin and Rose's duet, 'I Know A Youth', 'When the Night Wind Howls', the song of Sir Roderic and the ghosts in the Ruddigore picture gallery and 'My Eyes are Fully Open', the trio of Sir Ruthven, Despard and Mad Margaret.

Richard's introductory song, 'I Shipped, D'Ye See, in a Revenue Sloop' caused a commotion in France when it crossed the channel. Gilbert was in reality ridiculing the British, who Richard describes running away from the frigate, and the boasting of the British navy. The French however, it appears, thought they were being mocked, and were most offended.

These songs are good examples of Sullivan's music to be found in Ruddigore; the sweet love song is the epitome of the sunny tone of the first act, while the second act numbers display the darkness of Ruddigore Castle, as well as the fact that the magical complement between Gilbert's lyrics and Sullivan's music was still present. One of Ruddigore's most touching moments comes with 'There Grew a Little Flower', the duet of Sir Roderic's ghost and Dame Hannah in which they remember their brief love affair. Unfortunately, many of the other songs from the operetta are ultimately fairly forgettable, although solid Sullivan fare.

Ruddigore went into rehearsal as soon as audiences for The Mikado began to decline. It was in fact one of Gilbert's most difficult productions to stage. This was mainly because of the problems of bringing the portraits of the Murgatroyd ancestors to life in Act II. Another difficulty was in ensuring that the orchestra could follow Sullivan's conducting while the stage was blacked out during the second act. Turning a glass tube into a baton solved this. The tube, which contained a platinum wire, would glow red.

Before the production, members of the press had complained about the Savoy's secrecy before the opening night, and began to write of their discontent. Gilbert replied with a stinging letter to the Pall Mall Gazette, saying that members of the chorus and personal friends had all been invited to watch a reading of the piece. He saw nothing unusual in refusing to release plot details, and responded to the complaint about the lack of publication of a title by saying:

The name of the play is at present unknown to myself and I shall be much obliged to anyone who will tell it to me.

During rehearsals for the production Gilbert, anxious to live up to previous standards, would invite his friends to come to watch and offer advice. The cast resented that people who knew nothing about the theatre were being allowed to tell them what to do, and eventually Rutland Barrington, playing Sir Despard Murgatroyd, refused to rehearse in front of these people. Gilbert was furious at the public rebuke, and for the next few days would tell any member of the company who happened to sit watching rehearsals from the stalls 'You mustn't sit here; Barrington won't like it'.

After its poor first night reception Gilbert and Sullivan substantially reworked the second act, although following generally indifferent reviews, business did not really pick up. It is really in the last century that Ruddigore came into its own. It is particularly appropriate today, when parodies on specific genres are so popular.