The D'Oyly Carte Company Content from the guide to life, the universe and everything 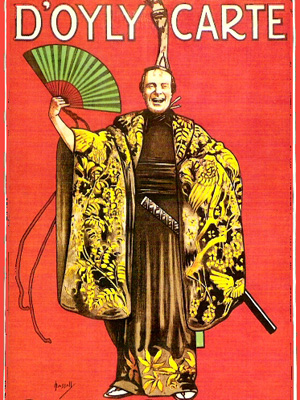 The D'Oyly Carte Company was founded by Richard D'Oyly Carte in order to perform the comic operas of William Gilbert and Arthur Sullivan. The partnership between the three men began in 1875, when Carte commissioned Gilbert and Sullivan to create a curtain raiser for a production of Offenbach's La Perichole. They subsequently produced Trial by Jury which was a huge success.

The first full-length operetta the three men produced was The Sorcerer, and when casting took place for this, Carte considered the potential for further operettas. The cast of this first opera formed the nucleus of the D'Oyly Carte Company which officially came into being after the production of HMS Pinafore in 1878. This company has continued performing the works of Gilbert and Sullivan up to the present day, although its prominence in the London theatre world has reduced since the end of the 19th Century, when it was one of few permanent companies with its own theatre.

Many of the original members of the D'Oyly Carte Company were the stars of the London stage in their day, although towards the end of Gilbert and Sullivan's partnership some did decide to move on to 'straight' theatre. Throughout the years since Gilbert and Sullivan created their classic comic operas, the D'Oyly Carte Company has been foremost in keeping them alive in professional theatre, and the works have recently enjoyed a marked revival.

Richard D'Oyly Carte and his Company

Richard D'Oyly Carte was born in May 1844, the son of a partner in a musical instrument-making firm. Thus as he grew up he was surrounded by the arts, and eventually he entered his father's business. In his free time Carte was an amateur composer, writing scores for comic operas, and his dream was to establish a vehicle to put English comic opera on the London stage. His first step to this end was to set up an agency for opera and concert management, which grew large enough to handle some of the biggest performers and creators of the day, including Oscar Wilde and Charles Gounod. In 1870 Carte proposed to Arthur Sullivan that he compose a comic opera, but Sullivan was too preoccupied with his 'serious' music. Therefore nothing came of this meeting until 1875 when Carte became business manager of the small Royalty Theatre in Soho where he wanted to establish a repertory of comic operas.

Carte wanted a piece to accompany La Perichole, and remembered the production of Thespis he had seen a few years before. On investigation he discovered that Gilbert had written a script based upon one of his 'Bab Ballads' written for the journal Fun. The two men agreed to approach Sullivan to score the piece, and so Trial by Jury was born. This was such a success that the three men had no problem finding backing for another venture, and Carte leased the Opera Comique for the production of The Sorcerer.

From then on 'Mr D'Oyly Carte's Opera Company', as it was always billed, went from strength to strength with Gilbert and Sullivan's works, so much so that part way through the run of Patience Carte decided that the company needed its own theatre. To this end he created the Savoy Theatre, the first London Theatre to be lit by electricity. The three-way partnership continued to work well, despite occasional frictions between Gilbert and Sullivan. Carte wisely allowed his duo free reign with their productions, and busied himself in keeping the business running smoothly behind the scenes. In 1888 married his office manager Helen Lenoir, who would take over the running of the company after his death.

However, the harmony ended in 1889 during the run of The Gondoliers. Gilbert was furious that Carte was expecting the Company (which leased the Savoy Theatre from Carte, the private businessman) to pay for the refurbishment of the theatre. The argument ended up in court, where Gilbert won the legal battle, but Carte retained the moral high ground. The result caused no change in financial practices of the D'Oyly Carte Company, and so Gilbert withdrew from the partnership in dudgeon.

In later years the three men brought the D'Oyly Carte Company back together for two further operettas: Utopia Ltd. and The Grand Duke. Neither of these however was a huge success, and the company turned to reviving Gilbert and Sullivan's previous hit works. Throughout the 1890s Richard D'Oyly Carte's health deteriorated, and he died in April 1901. His wife Helen subsequently took over the management of the company.

The D'Oyly Carte Company since Gilbert and Sullivan

Helen D'Oyly Carte ran the D'Oyly Carte Company until her own death in 1913. Since then, the management has continued to run in the Carte family. Richard D'Oyly Carte's son from his first marriage, Rupert, took over the company after his stepmother's death. He in turn was succeeded in 1949 by his daughter Bridget, but it was Rupert D'Oyly Carte who took the hugely successful step of bringing the touring section of the Company into London for a repertory season, at a time when all things from the Victorian era were decidedly unfashionable. He also realised that the D'Oyly Carte company needed a larger base theatre, and relocated to the Prince's Theatre.

The Company continued to be billed as 'Mr D'Oyly Carte's Opera Company' until 1961, when Bridget D'Oyly Carte founded the D'Oyly Carte Opera Trust. Bridget remained chairman of directors, and was awarded a DBE in 1975, during the centenary celebrations for Trial by Jury. However nothing could prevent the imminent collapse of the company. Costs rose, and arts council funding was reduced, leading the company into a valedictory tour, and closure in 1982.

When Dame Bridget died in 1985 she left a legacy of £1million to the D'Oyly Carte Opera Trust, and the company was reformed. The decision was made for the company only to mount short seasons in London and other major cities. The D'Oyly Carte Opera Company reformed in 1988, and ten years later returned to a London base in Kennington, from which they have mounted successful productions in both the Royal Festival Hall and the West End.