'The Yeoman of the Guard' - the Comic Opera Content from the guide to life, the universe and everything 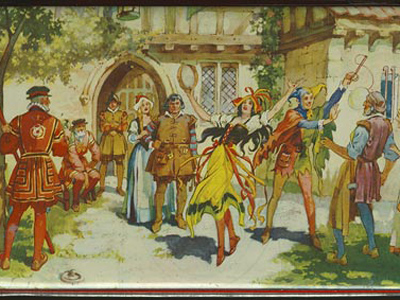 The Yeoman of the Guard, or the Merryman and his Maid was Gilbert and Sullivan's 11th collaboration, and the nearest they came to creating a 'Grand Opera'. It is the only one of their joint works to eschew satire, and Sullivan was delighted with Gilbert's plot, writing in his diary:

Gilbert's unusually serious plot was inspired by a poster he saw for the Tower Furnishing Company at Uxbridge train station. The poster featured a picture of the Tower of London, and set Gilbert to thinking about using the Tower as a location for the next Savoy opera. He immediately began to script The Tower Warden. The Tower is the only setting in the opera, which went through several name changes before The Yeoman of the Guard was settled upon. The opera has in fact been performed four times in the moat of the actual Tower itself, allowing the use of the real executioner's bell at the appropriate moments.

The Yeoman of the Guard tells the story of the events in the life of one Colonel Fairfax during the last days of his imprisonment in the Tower. He has been denounced as a sorcerer, and is facing execution. Sergeant Meryll, a Yeoman of the Guard, and his daughter Phoebe, both of whom wish to save Fairfax, lead the audience through the plot.

The opera opens with Phoebe Meryll sighing over her hopeless love for Fairfax. This preoccupation is of great annoyance to the head jailer, Wilfred Shadbolt, who is in love with the girl, and whom - before Fairfax's arrival - she had treated with affection. Dame Carruthers, the Tower housekeeper, and Sergeant Meryll then arrive. The Dame is displeased by the Merylls evident desire to save Fairfax, whom she believes to be guilty. However Sergeant Meryll is so distressed by events that not even the imminent arrival of his son Leonard can cheer him - even though Leonard may be bringing a pardon for the prisoner.

Leonard arrives without a pardon, but the inconspicuous manner of his arrival leads his father to come up with an idea. Leonard will go into hiding, while Sergeant Meryll and Phoebe will aid Fairfax to escape and masquerade as Leonard, who is due to take up a post as a yeoman1. At this point Fairfax himself passes on his way to spend his last hours in solitude; he seems perfectly resigned to his fate, even though he is an alchemist and not a sorcerer. This only upsets Phoebe and her father more.

Colonel Fairfax asks the Tower's Lieutenant to grant him a favour - to find him a wife. It appears that Fairfax is imprisoned on the testimony of a greedy cousin, who will inherit his estate if Fairfax dies unmarried. Since the wife will receive a 100 crowns, and be a widow within an hour there should be no problem finding a willing candidate. The Lieutenant rapidly selects a girl, Elsie Maynard, a merrymaid who has arrived at the Tower with a wandering jester, Jack Point, to entertain the crowds. It is obvious that Jack is in love with Elsie - but he encourages her to agree to the Lieutenant's proposal since her husband-to-be will soon be executed. She is therefore blindfolded and led away to marry Fairfax, whilst Jack is employed as the Lieutenant's new jester.

Meanwhile Phoebe is busy flirting with Wilfred in an attempt to steal his keys. He is enraptured by her attentions, and she is able to slip his keys from his belt and pass them to her father. While Phoebe continues to occupy Wilfred, Sergeant Meryll frees Fairfax and returns the keys to his daughter. She returns the keys to Wilfred unnoticed, and then vanishes, leaving the jailer completely confused. He leaves, and is replaced by Sergeant Meryll and his 'son' Leonard (a cleaned-up Fairfax). The new yeoman is introduced to the rest of the guards, and is greeted rather too affectionately by his 'sister'. Just then the bell of St Peters begins to toll and the crowds come forward to watch the execution, but Fairfax is found to have escaped.

The second act finds Jack Point distracted; his beloved Elsie is still married, and there is no sign of her husband. He persuades Wilfred to aid him in creating a story that will help them reclaim their loved ones. Wilfred will claim that he came across Fairfax and, although overcome in a struggle, managed to shoot him as he tried to swim across the Thames to safety. During his time as a yeoman Fairfax has begun to fall in love with Elsie himself, and then discovers that she is, in fact, his new wife. He sets out to test her fidelity, but just as he is about to reveal his identity a shot is heard and Wilfred and Jack rush in with their tale.

Jack then reminds Elsie that with her husband dead she is free to marry whomever she wants, and he begins to make his case. 'Leonard' is amused, and telling Jack that wooing is an art, begins to demonstrate how it is done. This distresses both Jack and Phoebe as they realise that Fairfax and Elsie are truly in love. A distressed Phoebe is discovered by Wilfred, to whom she reveals that the man believed to be Leonard Meryll is not her brother. Wilfred immediately guesses that he is in fact Colonel Fairfax.

At this point a messenger arrives to announce that Colonel Fairfax has been pardoned and will shortly come to claim his bride. Elsie is distressed, she loves 'Leonard', but knows that she must go with Fairfax. However when Fairfax appears she recognises him as her beloved Leonard, and the couple are reunited joyfully. In the midst of the celebrations Phoebe finds herself promised to Wilfred, while Dame Carruthers extracts a proposal from Sergeant Meryll. The final note, however, is not one of celebration, as Jack Point, devastated by the loss of Elsie and still singing his sorrowful love song collapses insensible at the feet of the lovers.

The music for The Yeoman of the Guard is the nearest to approaching 'grand opera' of any that Sullivan wrote during his collaborations with Gilbert. Sullivan had complained after Ruddigore that he felt that his music had simply been added, and implied that he felt pushed aside. The Yeoman of the Guard more than makes up for that. Many of the songs would not feel out of place in a grand opera, while in the rest, Sullivan makes full use of a range of styles, from madrigal to folk song.

Possibly the most poignant song in the opera is 'I Have a Song to Sing O', a duet for Elsie and Jack Point in its first instance, but which later reappears, sung by Jack as the finale. This makes The Yeoman of the Guard unusual in Gilbert and Sullivan, as there is no rousing final chorus, but just the forlorn jester singing his lament, with occasional interjections from the chorus, but not from the other main characters. The number features ideas from folk songs, and is prophetic of the futures of both Elsie and Jack, as it describes:

It's the song of a merrymaid, peerly proud,
Who loved a lord, and who laughed aloud
At the moan of the merryman, moping mum,
Whose soul was sad, and whose glance was glum,
Who sipped no sup, and who craved no crumb,
As he sighed for the love of a ladye!.

Other popular Yeoman tunes include 'When a Wooer goes a Wooing', in which Colonel Fairfax demonstrates the art of wooing so well that Elsie falls in love with him; in 'A Private Buffoon' Jack details the difficulties of being a jester and having to make people laugh. It may be that these difficulties reflect Gilbert's own problems when writing his librettos, as shown when he writes:

If you wish to succeed as a jester, you'll need
To consider each person's auricular:
What is all right for B would quite scandalise C
(For C is so very particular);
And D may be dull, and E's very thick skull
Is as empty of brains as a ladle.

Sullivan's music is most impressive as it appears in several of the solos and in the incidental music. Most notable are Fairfax's ballad 'Is Life a Boon', in which he accepts his death, and Phoebe's teasing 'Were I thy Wife' with which she torments Wilfred, while trying to steal his keys. In addition, the overture for The Yeoman of the Guard is often considered to be the finest of any of Sullivan's works.

The opening night of The Yeoman of the Guard was a massive success. There had been concern that the audience would be disappointed by the lack of satire and overt comedy in the opera. The fear was unfounded. Yeoman marked the last performances of George Grossmith as a member of the D'Oyly Carte Company; Grossmith had created such classic roles as Sir Joseph Porter, Major-General Stanley, the Lord Chancellor and Ko-Ko for Gilbert and Sullivan. In Yeoman he played the tragic Jack Point before departing the Savoy to try his hand at straight theatre.

The use of the executioner's bell is one of the most chilling aspects of The Yeoman of the Guard, and a perfect merging of fact in a work of fiction. The bell of St Peter's was always tolled before executions on Tower Hill or Tower Green. The bell sounded in the original production had to be positioned so that the percussionist could see the conductor at all times. The bell eventually found itself displayed in Gilbert's Billiard room at his Grim's Dyke home. The Yeoman of the Guard has since been performed four times in the moat of the Tower, in which the real executioner's bell was used at the appropriate moments.

1An attendant or lesser official in a royal or noble household.