'The Mikado' - the Comic Opera Content from the guide to life, the universe and everything 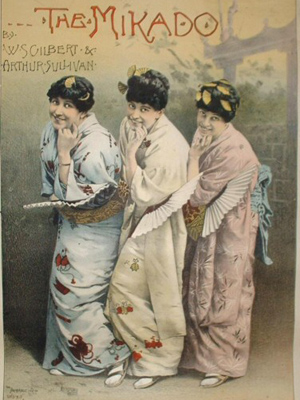 The Mikado, or the Town of Titipu was Gilbert and Sullivan's eighth comic opera and opened at the Savoy Theatre in March 1885. It was even more successful than their previous works. It is one of the least satirical of Gilbert and Sullivan's creations as Gilbert, inspired by an exhibition of Japanese culture he had visited, wished to celebrate that culture. The result is a touching tale of true love surrounded by disguise and deception. However, Gilbert does not completely eschew ridicule, particularly in the figure of Katisha, a spinster desperate to marry the son of the Mikado.

Today The Mikado is probably the most popular of Gilbert and Sullivan's comic operas, being widely staged in both theatres and concert halls. It has even crossed into movie territory in Mike Leigh's impressive and successful Topsy-Turvy, which tells the story of the opera's creation and includes highlights from the work. The Mikado's success is remarkable since the partnership of Gilbert and Sullivan very nearly fell apart after Princess Ida; Gilbert could come up with no ideas that Sullivan didn't find ridiculous, while Sullivan himself was preoccupied with his desire to write 'serious' music. Fortunately however, Gilbert's wife managed to persuade him to accompany her to the Japanese exhibition in Knightsbridge.

The main characters of The Mikado are

Surrounding them are the Mikado himself, Katisha, the Mikado's fairly elderly daughter-in-law elect, and the companions of Ko-Ko and Yum-Yum. The opera follows the travails of Nanki-Poo in his attempt to marry Yum-Yum and stay alive.

The first act opens in the town of Titipu, where Ko-Ko the tailor is reprieved from death (to which he was sentenced for flirting), and made the Lord High Executioner. Not knowing this Nanki-Poo arrives in the town disguised as a second trombonist seeking Yum-Yum. He believes that since Ko-Ko is sentenced to death his beloved will now be free to marry him. He is informed of the reversal of the situation by Pish-Tush and Pooh-Bah, who herald the arrival of the Lord High Executioner himself. Yum-Yum and two of her school friends, Peep-Bo and Pitti-Sing follow Ko-Ko.

Eventually Nanki-Poo finds time to be alone with Yum-Yum, and reveals his true identity to her. He tells her that he has assumed this disguise to escape Katisha, a wealthy old maid who has claimed him to be her husband. Distressed by their situation, the two lovers separate. Just then Pish-Tush and Pooh-Bah enter with a letter from the Mikado. He has just realised that there have been no executions in Titipu for a year, and says that unless one is carried out in the next month he will abolish the post of Lord High Executioner and turn the town into a village. Ko-Ko can find no one willing to be executed to save Titipu from such a fate, when Nanki-Poo returns, intending to hang himself because he cannot marry Yum-Yum. Ko-Ko suggests to the young man that he might prefer to be executed instead, and Nanki-Poo agrees on the condition that he can marry Yum-Yum at once and be executed at the end of the month. Ko-Ko has to agree, after all, once Nanki-Poo is executed Yum-Yum will be a widow and able to marry her official fiancé.

Titipu begins to celebrate the forthcoming nuptials when Katisha arrives, and tries to persuade the townspeople that Nanki-Poo is really the Mikado's son. Her desperate words are drowned out in a mass of noise, particularly from the young couple, and she is thwarted. Katisha swears vengeance as Nanki-Poo departs to prepare to marry his Yum-Yum.

The second act opens with Nanki-Poo and Yum-Yum debating how best to spend their brief marriage. Ko-Ko arrives to cut this happiness short by announcing that they cannot possibly continue with this marriage as, by law, when a man is executed his wife must be buried alive. The trio is then thrown into a quandary since Yum-Yum obviously does not wish to die, but dislikes the alternative of marrying Ko-Ko. At this point Pooh-Bah and Pish-Tush enter to announce the arrival of the Mikado. Ko-Ko really doesn't want to execute anybody, although Nanki-Poo is quite willing to lay his neck on the block.

Ko-Ko then comes up with an idea: everyone present can sign an affidavit saying that Nanki-Poo has been executed, while Nanki-Poo and Yum-Yum slip away to be married. This plan is put into effect just as the Mikado arrives with his daughter-in-law elect, Katisha. Ko-Ko, Pitti-Sing and Pooh-Bah each try and outdo the others in describing the 'execution', which gratifies the Mikado, although his main reason for coming to Titipu was to look for his son who is going by the name of Nanki-Poo. Katisha then sees the death certificate. The three conspirators pretend to be dismayed that they have executed the heir apparent, but the Mikado tells them he is not angry, but that the law decrees their punishment, so they must be boiled in oil.

The unfortunate trio turn to Nanki-Poo, now returned and married, begging him to come back to life. Nanki-Poo refuses, owing to Katisha's continued claim on him. He does say, however, that if Ko-Ko were to marry Katisha he would happily resurrect himself. Ko-Ko is horrified by this, but has no other choice and therefore pursues the lady. Katisha initially rejects him, but is finally won over by his song 'Tit-Willow' and his preparing to die from a broken heart.

At the finale the Mikado is preparing for the executions when Katisha rushes in with Ko-Ko, Pitti-Sing and Pooh-Bah, begging for his mercy for her new husband. The Mikado hesitates, feeling the need to enforce the law, when Nanki-Poo reappears with his bride Yum-Yum to resolve the situation.

The Mikado followed the slight disappointment of Princess Ida and was an instant success with critics and audiences. It was immediately obvious that Sullivan had created more than enough hits to secure the opera's longevity, and some reviewers compared the songs favourably with those of a grand opera. Nanki-Poo's opening number 'A Wand'ring Minstrel I' sets the tone for the opera: it is a gentle, melodious number in which Nanki-Poo sets out his intents. The Mikado's introductory solo 'A more humane Mikado never did in Japan exist' nearly didn't survive it into the finished opera, Gilbert at one point deciding it didn't fit, but, he was faced with the disagreement of the rest of the company and reinstated it. It is in fact a brilliant example of Gilbert's wit, as the song gently mocks the idea of laws based on theories rather than on practicalities, in this case the Mikado's burning desire to 'make the punishment fit the crime'.

The operas of Gilbert and Sullivan typically have a male tenor character that is central to the action, although not the hero. This mantle, which had previously fallen on characters such as Sir Joseph Porter, Major General Stanley and the Lord Chancellor, is taken up in The Mikado by Ko-Ko. Highlights of his part include the elegiac 'Tit-Willow', a tale of a broken-hearted bird, which he uses to woo Katisha, and 'The Flowers that Bloom in the Spring', in which he rails against Nanki-Poo's final solution to their problems. Gilbert also uses Ko-Ko's appointment as Lord High Executioner to get in a number of digs at people and types he disliked. In the song 'Someday it may Happen', Ko-Ko, relishing his new position, details those he could quite happily execute, knowing '(they'd) none of them be missed,' and includes such figures as compromising politicians, traditional humorists and female novelists!

The Japanese Exhibition that inspired The Mikado was the Emperor of Japan's method of gratefully acknowledging the receipt of a warship from Queen Victoria; he also gave permission for a company of his subjects to go to London and study Western civilisation. This may not have had the result he desired, as the Japanese presence in Knightsbridge aroused huge curiosity and their unfamiliar arts and customs attracted huge numbers of visitors from London society. Gilbert began to read about Japanese society and fairly soon created a story from which to work. Their presence also enabled Gilbert to create one of The Mikado's more surreal moments in Ko-Ko's response to the Mikado's inquiry as to Nanki-Poo's whereabouts:

Ko-Ko: 'It's rather awkward, but, in point of fact, he's gone abroad!'
The Mikado: 'Gone abroad? His address?'
Ko-Ko: 'Knightsbridge!'

Interestingly, from The Mikado's earliest tours, Gilbert allowed the actor playing Ko-Ko to substitute the name of a local place instead of Knightsbridge, the only time he ever authorised variations from his original script.

The presence of the exhibition was also of material benefit to the production. The D'Oyly Carte company needed to be taught to move and look like the Japanese they were impersonating, therefore Gilbert got permission for a dancer and tea-girl to aid the Savoy management in this difficult task. For the production the majority of the ladies' dresses came from Liberty and Co. and were made of pure Japanese fabric. The men's costumes were made by the tailor Mr C Wilhem, based on Japanese authorities. However, some of the principals performed in original Japanese dresses; Rosina Brandram, who played Katisha, appeared in a dress that was at least 200 years old.

The production was a huge success, originally running for over a year, and being revived regularly afterwards. However in 1907 the Lord Chamberlain withdrew The Mikado's performance licence for six weeks1. This was because Japan was now becoming a forceful presence in the international arena, and the Lord Chancellor did not wish to risk offending a visiting Japanese prince. Gilbert believed that the Japanese government had requested the ban, and the company went ahead with the performances regardless. During this time one of the Japanese journalists covering the visit attended a performance of The Mikado, he later said he was 'deeply and pleasingly disappointed'. He had been expecting to see his country insulted, but instead found he had thoroughly enjoyed 'the bright music and much fun'.