William Schwenk Gilbert - Dramatist Content from the guide to life, the universe and everything 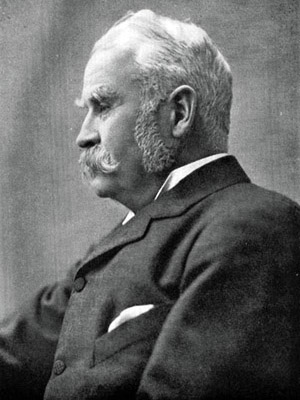 William Schwenk Gilbert (1836 - 1911) was one of the most noted dramatists and satirists of the 19th Century; however, he is most famous for his partnership with Sir Arthur Sullivan with whom he produced 14 comic operas. At the height of the partnership Gilbert was the toast of London, and today the works he helped to create are beloved of Amateur Operatic Societies everywhere.

Gilbert was born in London in 1836, the son of a retired naval surgeon, and had three younger sisters. It was not an affectionate family, and his parents separated in 1876; after their separation Gilbert was much closer to his father than to his mother. Most of his early youth was spent touring Europe with his family; at one point Gilbert was kidnapped by brigands in Italy, and a ransom had to be paid for his safe return. The family returned to London in about 1849 where the young Gilbert began a typical English education of the day at the Great Ealing school.

After his time at Great Ealing, Gilbert then studied at Kings College London, but subsequently decided to train as an artillery officer rather than continue his studies at Oxford. He hoped to serve in the army in the Crimea, but the war was over before he graduated. He then became a member of the militia for 20 years. In 1867 Gilbert married Lucy Agnes Turner, about whom very little is known. It was always thought that she was a meek woman, in contrast to Gilbert's natural ebullience, although it now seems that she may have had the upper hand in domestic matters.

Gilbert appears to have been attracted to the theatre from a young age. In later life he was able to recall the Haymarket Theatre of the 1840s, describing its dark, candlelit interior. During his time in the militia he had pursued abortive 'careers' as a government clerk and journalist. However, at the beginning of the 1860s Gilbert began to contribute to the journal Fun. The editor of the journal loved Gilbert's sketches and asked him to contribute regularly. Gilbert was unsure; he believed he would run out of things to write about. Fortunately he soon discovered that with a little bit of practice he could write a column even when he had nothing definite to say. These 'Bab Ballards' became Gilbert's first success.

Gilbert produced his first play Uncle Baby in 1863, but he did not follow up this step for another three years. At this point he began to work in Burlesque (spectacular) theatre. From 1869 Gilbert began to hone his abilities in two particular ways. At the Gallery of Illusion he began to create his own distinctively personal style, especially through the six musical plays he wrote for that theatre. He also showed a desire to alter the course of English theatre in his 'fairy comedies' at the Haymarket theatre. These may be regarded as Gilbert's first forays into the 'Topsy Turvy-dom' that he later perfected in his work with Sullivan.

At the same time Gilbert wanted to be respected professionally (dramatists at that time were deemed respectable as a group). He decided that the best way to achieve this was to publish plays in bindings suitable for gentlemen's libraries. In 1875 Chatto and Windus published a volume of Gilbert's plays, and at the back of this book was Trial by Jury.

The Partnership with Sullivan

Trial by Jury was the first indication that Gilbert's collaborations with Sir Arthur Sullivan could be profitable. It was their second foray into comic opera, their first, Thespis not having been a startling success. The pair had been brought together in 1871 by John Hollingshead, and as their partnership developed it became clear that Gilbert's individual work was never going to bring him the same sort of acclaim as these collaborations. Trial by Jury was also significant in that it brought Richard D'Oyly Carte into the lives of Gilbert and Sullivan. He was to bring the rest of their productions to the stage - and be the main reason the duo stayed together - for the next 15 years.

In 1877 Gilbert and Sullivan created The Sorcerer, their greatest success up to that time. In the same year Gilbert produced his best individual work to date, Engaged. This displayed to the world Gilbert's more extreme satire and was condemned by many critics. Gilbert's view and depiction of the world didn't change as he continued to work with Sullivan. However, the critical reaction to it did, possibly due to the distracting influence of Sullivan's melodies.

Once the partnership of Gilbert and Sullivan got under way, Gilbert's early prolificacy began to fade. He had produced a huge volume of work up until 1877, and although most of it was not among his best it did show his natural ability. This partly reflects the success of the Sullivan partnership. With fame came financial security and he no longer had to work so hard. His best work was that which he produced with Sullivan, both in terms of displaying his talent, and in its public recognition. This may well have been because Gilbert in his partnership with Sullivan was forced to edit and polish his work much more than his natural inclination allowed for in his individual work.

The collaborative partnership of Gilbert and Sullivan went from strength to strength, despite the difficulties behind the scenes. Some of these were displayed in Mike Leigh's 1999 film Topsy Turvy. One of the main contentions was that Sullivan wished to write a grand opera, and felt that his partnership with Gilbert was a distraction. At the same time Gilbert felt that his talent for writing and satire was not fulfilling its potential, and wished to move beyond the 'light entertainment' he was producing with Sullivan.

Until The Gondoliers in 1889, each Gilbert and Sullivan opera was more successful than its predecessor. However this work, despite being a huge success, showed a slight deterioration in Gilbert's satire and wit. After this work Gilbert and Sullivan officially and acrimoniously parted company after a final disagreement, Gilbert severing the partnership with a now infamous note:

The time for putting an end to our collaboration has at last arrived. In accordance, therefore, with the contents of my note to you of this morning, I am writing a letter to Carte (of which I enclose a copy) giving him notice that he is not to produce or perform any of my libretti after Christmas 1890. In point of fact, after the withdrawal of The Gondoliers, our united work will be heard in public no more.

Gilbert and Sullivan did however reunite for two more works: The Grand Duke and Utopia Ltd These shadowed the trend shown in The Gondoliers, as Gilbert was tired of his usual style of writing, and irritated with both the partnership and public that kept him rutted in it.

Gilbert officially retired from writing in 1896, and went to live permanently at his home in Grims Dyke. However like many in his position he continued to write now and again, producing four plays in his last 15 years. Gilbert was awarded a knighthood in 1907, but in spite of this he remained fiercely independent of the theatrical establishment, almost to the extent of being an iconoclast. In 1911 he produced his swan-song. The Hooligan was something written simply because that was what Gilbert wanted to do. It was, in effect, a labour of love. It was a short dramatic sketch, and indicated that Gilbert was beginning to create a new style of writing, as shocking to the public as his old one had been over 30 years earlier - before his partnership with Sullivan.

Unfortunately this style was not to be developed further. A few months after The Hooligan was produced Gilbert was giving swimming lessons to two young women at the lake near his home. One of them believed she had got out of her depth and called for help. Gilbert immediately jumped in to help her, but suffered heart failure in the middle of the lake. William Schwenk Gilbert died on May 29, 1911.