'Patience' - the Comic Opera Content from the guide to life, the universe and everything 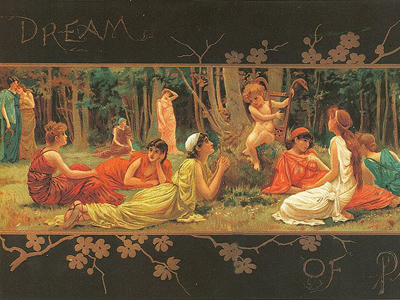 Patience, or Bunthorne's Bride opened in April 1881, and became the first Gilbert and Sullivan opera to be performed at the Savoy Theatre, where it transferred after six months. This transfer to a larger, electrically-lit theatre meant that the set needed to be redesigned and Gilbert revised sections of his production.

Due to its subject matter, Patience has dated a little more than Gilbert and Sullivan's other comic operas. Gilbert originally intended the plot to be based on a 'Bab Ballad' The Rival Curates; however, even he balked at the idea of satirising the church, feeling it would not be in good taste. He then returned to another old idea of a rivalry between two aesthetic men.

Aestheticism was very fashionable in London society at the time at which Gilbert was writing. Oscar Wilde was just publishing his first volume of poetry, and Gilbert's stinging comment in the libretto on a feature of aestheticism: 'If you walk down Piccadilly with a poppy or a lily in your medieval hand' is directed at Wilde's habit of presenting a single lily to Lily Langtry, the society beauty of the day. Nowadays, the character of Bunthorne is believed to have been modelled on Wilde, but at the time of the production he was supposed to have been based on a rival, Archibald Grosvenor. However in later years Wilde became so much more portly, in the image of Bunthorne, that most people assumed that the character was based on him.

Patience not only mocks the tendency of many men to affect aesthetic tendencies, but also the female admiration for such style. In this opera, all of the female characters, except the milkmaid Patience, are as obsessed with aestheticism as Bunthorne and Grosvenor. When Bunthorne becomes engaged to Patience they immediately transfer their affections to the equally affected Grosvenor. The final resolution only comes because the soldiers, desperate to regain the ladies' love, attempt to become aesthetes themselves.

This sixth opera from Gilbert and Sullivan was as much of a success as their previous huge hits HMS Pinafore and The Pirates of Penzance. However, it has not stood the test of time so well. Sullivan's score, while lovely, does not contain so many brilliant tunes for the audience to latch on to; a few critics also noticed that some of Gilbert's witticisms had flown over the heads of his audience. Despite this, Patience remains one of the duo's more popular works, partly due to its elegance and simplicity.

The Plot of Patience revolves around two aesthetically minded gentlemen, Reginald Bunthorne and Archibald Grosvenor, and the woman they both love, Patience the milkmaid. The love story is somewhat unusual, as Gilbert takes the idea of love being noble and self-sacrificial and exaggerates it. Therefore Patience, who comes to believe that love must be a duty and not a pleasure, refuses to marry any man who appears to be perfect as it might make her happy, and thus be untrue to the nature of love.

At the start of the operetta the audience is confronted with 20 lovesick maidens, including Angela and Saphir who are aesthetically styled and lamenting their lovelorn situation with regard to Mr Bunthorne. At this point Lady Jane, Angela's unpopular elder sister who also loves Bunthorne, appears and spells out to the girls the utter fruitlessness of their love. Mr Bunthorne, she tells them, is in love with Patience the milkmaid. Patience herself does not know what it is to love a man, and is happy to escape the misery it appears to cause the other girls.

At this time a regiment of soldiers arrives in the village. It appears that they had been stationed there the previous year, and had been engaged to the 20 lovesick maidens. The are stunned that the girls should reject them now in favour of Bunthorne, who appears and recites a terrible aesthetic poem that the ladies swoon over. Patience is also amazed at the maidens, and goes on to reject Bunthorne's love (even though he admits to her that he is an aesthetic sham), because she believes she can never love anyone. However this view is soon altered by a talk with Angela, who tells Patience that love is self-sacrifice and a duty, so the milkmaid vows to fall in love with the next man she sees.

At this moment a young aesthetic poet happens to pass, and the pair fall in love. It turns out that the poet is one Archibald Grosvenor, a child Patience used to play with, and the only person she has ever truly loved - besides her great aunt. Then suddenly Patience realises that she must not love Grosvenor because of his perfection - it would not be a duty or a sacrifice, but a pleasure. Patience immediately goes in hunt of Bunthorne, whom she finds about to raffle himself off to the lovesick maidens. She steps in and says she will marry him if that is what he wants. This causes the maidens anguish, until they catch sight of Grosvenor, and transfer their affections to the more dashing and handsome aesthete.

The second act opens with Lady Jane bemoaning her advancing years, and her continued affection for Bunthorne. The other girls are fawning over Grosvenor, who tells them the tale of the Magnet and the Churn in a desperate attempt to convince them he cannot love them. He still loves Patience, who is desperately unhappy with Bunthorne. Bunthorne himself is unhappy at the transference of the girls' affections to Grosvenor. Lady Jane, who is still desperate for his recognition, offers to help him become as nice as Mr Grosvenor is and then to confront his rival. Bunthorne gladly accepts, believing that vanquishing his rival would be the key to winning back the affection of all the maidens as well as Patience.

Meanwhile the Colonel, Major and Duke of the regiment are experimenting with aestheticism in an attempt to win back the girls. They freely admit that they don't understand it, enjoy it, or claim to be very good at it, but they are prepared to try it for the sake of love. Angela and Saphir are touched by these attempts, and begin to feel they may have misjudged the soldiers.

Bunthorne is finally prepared to confront Grosvenor. He orders his rival to make himself less popular with the young ladies, and threatens to curse Grosvenor if he refuses. Grosvenor realises sadly that he must accede to such a demand, and reluctantly promises to become a plain and ordinary man. This of course delights Patience; he is no longer perfect, and therefore she can sacrifice herself to duty and love him. At the same time Angela, Saphir, and Lady Jane decide that they will marry respectively the Colonel, Major and Duke. Bunthorne, therefore, finds himself left all alone with no bride.

As befits an operetta whose subject is aestheticism, much of Sullivan's music for Patience is gentle and reflective of the sadness experienced by many of the principal players. At the same time, the score does include several upbeat numbers including 'So Go to Him', the soldiers' opening number, 'If You want a Receipt', and the second act quintet, which is repeated again at the finale. The opening song 'Twenty Lovesick Maidens, we' sets the tone perfectly for the scenes of hopeless love that follow, and the tune recurs throughout the opera whenever the ladies mourn. One of the most famous lines in the operetta,

Though the Philistines may jostle, you will rank as an apostle in the high aesthetic band
If you walk down Piccadilly with a poppy or a lily in your medieval hand

... comes from Bunthorne's solo 'Am I Alone and Unobserved'. In this Gilbert and Sullivan use Bunthorne's position as an 'aesthetic sham' to mock the ideals of the movement, and also to reveal Bunthorne's shameless desire for attention.

Gilbert takes the chance to mock the ageing spinster in Lady Jane's solo, 'Sad is that Woman's Lot'. Jane bemoans the fact that she loves Bunthorne without return, and declares that if he doesn't acknowledge her soon it will be too late - her beauty will be gone. One of the operetta's more comic moments comes in 'The Magnet and the Churn' as Archibald Grosvenor compares his love for Patience to that of a magnet for a steel milk churn - fundamental to its nature, but ultimately fruitless. The analogy of the milk churn is particularly appropriate given Patience's profession.

In contrast to the melancholy of 'Twenty Lovesick Maidens', the lovers' duets of Patience and Grosvenor are sweet and uplifting; 'Prithee Pretty Maiden' is particularly charming as the duo declare their love, before Patience is aware of Archibald's identity. Another notable duet is 'I'm a Commonplace Young Man' in which Grosvenor accedes to Bunthorne's demand that he change, and they describe the character that he must now assume. Possibly Patience's most famous song belongs to Bunthorne and Lady Jane. In 'Sing Hey to You', Lady Jane gains Bunthorne's attentions by offering to help rid him of the rival Grosvenor. It is an incredibly infectious Sullivan tune; however, the lyrics of the chorus must rank among Gilbert's more ridiculous:

Patience was the first Gilbert and Sullivan opera to be produced in Richard D'Oyly Carte's new Savoy Theatre. This meant in effect that it had two opening nights: the first at the Opera Comique where the operetta was under critical scrutiny, and the second at the Savoy when the new theatre was the main topic of review.

The Savoy Theatre was one of D'Oyly Carte's most shrewd business manoeuvres. At the time that Patience went into rehearsal, the company's lease on the Opera Comique had nearly expired, but rather than renew it he decided to build his own theatre. Carte designed the theatre specifically to suit the new style of comic opera. Both Gilbert and Sullivan were consulted, and the Savoy was state of the art when it opened. Now the theatre is part of the Savoy group, which includes the Savoy, Berkley and Claridges hotels.

For the American tour of Patience, Carte decided to unite with Oscar Wilde. Carte pointed out that if Wilde combined his own tour of America with that of the company, the resulting publicity might benefit both parties. Wilde saw the shrewdness of the move, and became a travelling advertisement for the operetta that followed him.

As a result of the new, larger theatre, the production of Patience had to be reworked, notably to incorporate the electric lights. The company also changed the style of the programmes; previously a simple playbill which cost sixpence, with the new theatre came beautifully designed programmes that were free to the audience. There was also a startling upturn in the standard of refreshments; the Savoy provided real whisky and coffee, rather than chicory1.

The success of Patience brought another novelty into the world of the D'Oyly Carte Company. A picnic on the Thames was organised with three riverboats, each headed by one of the company partners: Gilbert, Sullivan and Carte. These picnics became an annual event, a delight to a company that worked so hard to maintain the success of Gilbert and Sullivan's work - a success that would continue for a few years longer.

1Frequently used then (as now) as a coffee substitute.