Yusuf Islam (Cat Stevens) - Singer/Songwriter Content from the guide to life, the universe and everything 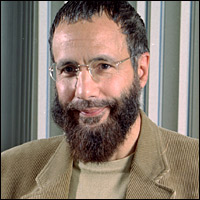 This talented singer and songwriter was born in London on 21 July, 1948. His father was a Greek Cypriot and his mother Swedish. The fire and ice in their stormy relationship was to mould the young Steven Demetre Georgiou into a complex man whose life took many directions.

The youngest of three children, Steven is the first to admit he was probably spoilt. The family lived above their Greek restaurant in Shaftesbury Avenue, in the West End of London. Even though his parents divorced when Steven was eight, they still lived and worked together in the restaurant. When he was 11 years old, his mother returned to Sweden, taking Steven with her. He found himself the centre of attention at his new school, being the only dark-haired, dark-eyed, olive-skinned child in the playground. After six months his mother decided they should return to London and rejoin the rest of the family.

The Georgious were Greek Orthodox in their religion. While his parents were not so strict at home, they wanted to ensure their children had a good moral education which followed strict guidelines. Steven was given a Catholic education, although he was not allowed to participate in any of the religious rituals at school.

Steven was encouraged by his family, especially his mother, to follow his artistic talents. He taught himself to play the piano and later on he learned to play the guitar. At the age of 17 he attended Hammersmith College; it was here that he began writing and singing his own songs.

Steven found a different crowd. He was enjoying new experiences. His nickname was rumoured to have been given to him by a girlfriend, who said he had cat's eyes.

One day, he turned up at the offices of manager-producer Mike Hurst, asking if he could play some of his songs. Hurst - a former member of The Springfields - let him sing. He was bowled over by what he heard and asked the young man his name:

My name is Steven, but my friends call me Cat...

Cat Stevens arrived on the popular music scene at the age of 18 with his first hit single 'I Love My Dog', which reached number 40 in the UK charts. He went on tour around the UK, had more singles in the charts and was beginning to make his way in the fickle business of music. His next single, 'Matthew & Son', just missed charting at the number one slot in 1967. The album of the same name entered the top ten in the UK charts. Stevens was beginning to make a name for himself as a songwriter. That same year the Tremeloes reached number four in the UK charts with a Stevens composition 'Here Comes My Baby'; this song also put the Tremeloes just outside the top ten in the American charts.

The American soul singer PP Arnold was to have a massive hit with Stevens' song 'The First Cut Is The Deepest', which helped her break into the UK charts for the first time. Rod Stewart also recorded it some ten years later.

Stevens' singing career faltered at the tender age of 19 years when he was rushed into hospital, where he was diagnosed with tuberculosis. He spent three months in hospital and a year convalescing. When he returned to the recording studio, his first single was very poorly received. For a short time, Stevens just continued with his songwriting instead.

Under a new recording contract, Stevens returned to the music scene in 1970 with the album Mona Bone Jakon. Very different from his earlier works, this was based more on folk music and included the hit single 'Lady D'Arbanville', a song he had written for the actress Patti D'Arbanville, his then girlfriend.

By the end of 1971, Stevens had released two more albums, Tea for the Tillerman and Teaser and the Firecat, which are considered by many to mark the peak of his popular appeal. Certainly the great majority of his chart singles and best-remembered songs are contained in these two collections, including 'Wild World', 'Moonshadow', 'Father and Son' and 'How Can I Tell You', among several others.

The popularity of these songs was partly because they were arranged for acoustic guitar and a single voice, and were not too difficult to play. In a new age of social commentary through folk music, Stevens made performers of many of his admirers. This is not to say, however, that the songs were earnest and worthy. Though he did deal with major issues even at this early stage of his songwriting career, the treatment was generally light and hopeful, perfectly in tune with the optimism of the time.

In 1976 Stevens almost drowned while swimming in the Pacific; he was caught by a strong current and struggled to make it to the shore. He made a promise to God - should he survive, he would do His Will. Shortly after that incident, his brother presented him with a copy of the Qur'an brought from Jerusalem. Stevens saw this as a sign; it was time to shed his old lifestyle and follow his calling.

In 1977 the singer began to show signs of stress. He stopped giving interviews and was seen less and less by the public. Like most other wealthy stars, he was being taxed heavily at that time - so he moved to Brazil for a year. However, the taxes he would have paid to the Inland Revenue were donated to charity.

On 23 December, 1977, Stevens formally became a Muslim and after the release of his last album Back to Earth in 1978, little was heard of him for almost ten years.

During those quiet years, Cat Stevens became known as Yusuf Islam and began to sell off his possessions. He allowed schools and charities to use his songs - without invoking copyrights - and he opened a Muslim school just outside of London. He became a very active member of the Muslim communities within British society.

Yusuf entered into an arranged marriage in 1979 with Fawzia Ali, a Muslim from central Asia. They have four daughters and a son. Fawzia keeps a very low profile and Yusuf rarely discusses his family life with the media.

When the call came from Bob Geldof for the world to unite against the famine in Ethiopia, Yusuf volunteered his services to the hugely successful Live Aid concert in 1985. He even wrote a song especially for the occasion. Alas, Elton John's appearance ran too long1 and to bring the schedules back for the American audience Yusuf's appearance was dropped from the line-up. Not to be deterred, he began writing and composing again. An album called A is for Allah was produced for the instruction of children and he also created his own record label: Mountain of Light.

On 21 February, 1989, Yusuf was addressing students at Kingston Polytechnic, London. Someone asked him a question about the fatwa issued by the Ayatollah Khomeini against Salman Rushdie for writing the book Satanic Verses. Although still learning Islam, Yusuf attempted to explain why the book was seen as blasphemous to the people of Islam. Two British newspapers carried a story stating Cat Stevens endorsed the fatwa. Feeling it was hopeless to attempt to explain it further, Yusuf retreated from the public eye.

Yusuf once again recorded 'Peace Train' to be used on a compilation CD which included Paul McCartney and David Bowie. Then at the Nelson Mandela 46664 Concert Yusuf sang in English, in public, for the first time in 25 years.

With the high security alerts in the USA in the wake of the 9/11 bombings, Yusuf found travelling difficult. Aboard flight 919 London to Washington on 21 September, 2004, his name was flagged as being on a 'no fly' list. The United Airlines plane was diverted to Bangor, Maine, where he was detained by the FBI until he was deported back to England the following day. Allegations were made that he was sending funds to the Palestinian Islamic militant group Hamas. The Sun and the Sunday Times repeated those allegations. Yusuf sued for libel and won a substantial award for compensation, which he donated to the Asian Tsunami Appeal in 2005.

I want to make sure that people are aware that I've never ever knowingly supported any terrorist groups past, present or future.

Two months after being accused of aiding terrorism, Yusuf Islam was honoured with a 'Man of Peace' award. The presentation ceremony in Rome on 10 November, 2004, before five of the Nobel Peace Prize laureates' committee was for 'dedication to promote peace, the reconciliation of people and to condemn terrorism.'

That topsy-turvy year ended on a high when he re-recorded 'Father and Son' with Ronan Keating. The record shot straight to second place in the British charts, only beaten to the top slot by Band Aid 20 and their re-mix of 'Do They Know It's Christmas?' All the proceeds from the Yusuf and Ronan recording were donated to the Band Aid charity.

In November, 2005, Yusuf was awarded an honorary doctorate from the Gloucester University for his services to education and humanitarian relief.

Yusuf called on all British mosques to support this worthy charity and to donate generously at their Friday prayers.

God willing, this initiative will help Muslims expand their vision and role in Britain to care for the poor people of this country, particularly the very young ... Many Muslims send their charitable donations abroad to very worthy causes, but we must not forget the emphasis Islam also places on the rights of neighbours and fellow citizens.

1Due to technical difficulties, Elton John was late arriving on stage. His session extended close to the scheduled satellite link with the American version of Live Aid.