Band Aid and Live Aid Content from the guide to life, the universe and everything 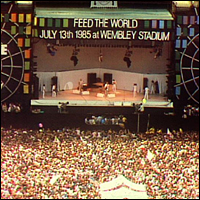 The biggest-selling UK single of the 1980s came about because Bob Geldof was watching the news and happened to see a report by Michael Buerk. It turned out to be one of the most important news items in history.

A Band Aid for the World

The Boomtown Rats' singer was shocked by scenes of famine in Ethiopia, broadcast by the BBC in October 1984, and was determined to do something to help. Although the Boomtown Rats were long past their commercial peak and on the verge of breaking up, Geldof had many friends and contacts in the music business, and set about organising a project to raise money for the victims of the famine. The first person he called was his friend Midge Ure, lead singer with Ultravox. Geldof also called his wife, Paula Yates, who was the presenter on the Channel 4 pop show The Tube and asked her to spread the world — they were going to write a song and use the proceeds to save lives.

The project came to life on 25 November, 1984, when the song 'Do They Know It's Christmas?' was recorded at Air Studio in London. Written by Geldof and Ure, the recording featured an impressive cross-section of the most successful British rock and pop acts of the time, under the group name Band Aid1:

Other stars who were unable to attend - including David Bowie, Paul McCartney and Holly Johnson of Frankie Goes To Hollywood - recorded messages of support which were included on the B-side of the single.

In its first week of release the single became the UK's fastest seller of all time, entering the chart at number one and going on to sell over three million copies, making it the biggest-selling single in UK history up to that point, a title it held for almost 13 years2. The single was also a major US hit, even though Christmas was long gone by the time it could be released in the States. 'Do They Know It's Christmas?' returned to the UK chart a year later, reaching number three, and eventually it raised over £8 million.

As others began to realise the fund-raising potential of getting a group of celebrities together on one recording, several other singles for Ethiopia were released in the following months. First out of the blocks was 'Starvation' by Starvation, a collaboration between several acts who came to prominence as part of the two-Tone movement of the late 1970s and early 1980s, such as Madness and The Specials. This was followed by the American response to Band Aid, 'We Are The World' by USA for Africa, featuring the likes of Michael Jackson, Lionel Richie, Cyndi Lauper, Bob Dylan and Willie Nelson.

As Geldof began to learn more about the situation, he discovered that one of the main reasons why African nations were in such dire peril was because of repayments on loans that their countries had taken from Western banks. One horrifying statistic was that for every pound donated in aid, ten times as much would have to leave the country in loan repayments. It soon became obvious that one song was not enough.

The runaway success of Band Aid and USA for Africa was followed by a series of one-off concerts which raised further money for the cause. On 13 July, 1985, Geldof took this idea to its logical conclusion by organising Live Aid, a mammoth event staged simultaneously at Wembley Stadium in London and JFK Stadium in Philadelphia. Thanks to an unprecedented decision by the BBC to clear their schedules for 16 hours of rock music, the event was also broadcast live in the UK on television and radio. The acts who took part in the concert were:

Other countries showed their support, with broadcasts from Australia (featuring INXS), Austria and, thanks to satellite technology, even the Soviet Union - the first time anyone in the West had ever seen an uncensored, live broadcast from the USSR.

The broadcasts were plagued by technical problems, satellite breakdowns and howls of feedback. But no-one had ever seen such a monumental stage show before (Phil Collins famously flew on Concorde so that he could play at both Wembley and Philadelphia on the same day), and so no-one had any expectations. The event was the lead story in the evening news bulletins around the world, and managed to hit the front page of every single newspaper the following day. Feeding the World was finally big news, just as Geldof and his supporters had hoped it would be.

In total, Live Aid raised over $100 million for famine relief. Geldof was subsequently knighted for his efforts4.

The idea of the charity single subsequently spread to fund-raisers for other causes, leading to a steady flow of charity ensembles hitting the chart throughout the remainder of the decade, although these were usually cover versions of well-known songs rather than specially written numbers. Those which topped the UK chart were:

The Band Aid story turned another chapter when 'Do They Know It's Christmas?' was rerecorded at Bob Geldof's request by Pete Waterman, at the time one of the biggest pop producers in the UK. This time the stars invited to participate included Bros, Kylie Minogue, Rick Astley, Jason Donovan and, again, Bananarama. Credited to Band Aid II, with the original recording on the B-side, the song again reached number one and brought the 1980s to a fitting close.

On the 20th anniversary of Band Aid, a new generation of artists, including Chris Martin from Coldplay, Dido and Robbie Williams, came together to rework the song as part of the ongoing battle to eradicate starvation. Band Aid 20 sold 200,000 copies in its first week, clinching the UK Christmas No 1 in 2004 and topping the charts for four weeks, proving that the power and message of 'Do They Know It's Christmas?' hadn't diminished over the two decades since it was first recorded.

1A pun on the name of a well-known brand of sticking plaster, it was also a modest acknowledgement that the project's intention was a small measure compared to the problem, like using a sticking plaster to save someone from dying.2'Do They Know It's Christmas?' was eventually outsold by 'Candle in the Wind 1997', Elton John's tribute to Diana, Princess of Wales.3Effectively a reformed Led Zeppelin but without their late drummer John Bonham.4Although a Knight of the British Empire, he cannot use the title Sir Bob Geldof as he is not a British citizen.