Paula Yates (1959 - 2000) - Author and TV Presenter Content from the guide to life, the universe and everything 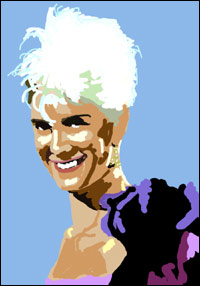 Paula Yates was sexy, sassy, smart, funny, talented, and she could flirt for the entire planet. The TV presenter and former wife of Bob Geldof was present for the creation of some of the most pivotal events in pop history, Band Aid and Live Aid. The books she wrote are insightful, witty and entertaining, though ill-received in some parts of the media.

Paula was born on 24 April, 1959, in Colwyn Bay, North Wales, UK. Her mother, Heller Toren (stage name Helene Thornton), was a former Bluebell Girl who had dreams of becoming a film star, which sadly never materialised. The man whom Paula thought was her father, the TV presenter Jess Yates1, suffered from depression. Yates (1918 - 93) was 16 years older than his wife and the marriage was unconventional with both pursuing separate goals. In an unsettled childhood, from the age of eight Paula lived mostly with her mother, moving around Europe and living in Malta and Majorca.

Paula moved to London in 1976 and met Boomtown Rats singer Bob Geldof, whom she pursued relentlessly. They began a relationship and eventually married in 1986, with Paula choosing to wear a red satin ballgown-style wedding dress for her big day. It was a traditional rockstar wedding, with Dave Stewart as Bob's best man, and Dave's musical partner Annie Lennox as maid of honour, and plenty of paparazzi in attendance.

From 1982 until 1987, Paula co-hosted a live music show, The Tube with former Squeeze keyboard player, Jools Holland. The Tube was Channel 4's ultra-cool pop show. Paula's flirty, irreverent, making-it-up-as-she-went-along style helped mark the show as different to the BBC's Top of the Pops. Geldof's own career had been on the decline, so Paula was the main wage-earner. Band Aid and Live Aid gave Geldof a very high profile, but his efforts were unpaid. This brought about another shift in their relationship - which had always been unconventional. At one time Geldof was known as 'Mr Paula Yates' and then suddenly he was 'Saint Bob'.

On The Bed With Paula

In the 1990s Geldof set up a production company called Planet 24. One of the programmes it produced was Channel 4's The Big Breakfast, during which Paula interviewed celebrities on a double bed. Paula's style of open flirtation usually2 won over even the most coy star guests. Geldof was also a presenter, although he interviewed more politically significant figures, grilling them in his own inimitable style. It was unmissable television, as you never knew what was going to happen next, or what was going to be talked about. Their two styles were very different, practically poles apart. Paula was like a playful cat toying with a mouse, Bob was like a coiled snake, the size of a rearing grizzly bear. Paula, who regularly asked about her interviewees' sex lives, rarely upset the super-egos, because she made them feel so comfortable, and many opened up to her, no doubt saying more than they meant to.

Paula and Bob had three daughters: Fifi Trixiebelle (born 1983), Peaches Honeyblossom (born 1989), and Pixie (born 1990). Paula had a fourth daughter, Tiger Lily (born 1996), with Michael Hutchence. Paula was widely criticised in the press for the names she gave her children.

Paula published her first book, Rock Stars in Their Underpants in 1978, with a foreword written by comedian Peter Cook. It was hailed by Andy Warhol as 'the greatest work of art in the last decade'. Considerable praise from a man who is considered by many as the most influential American artist of the second half of the 20th Century, to someone not yet twenty years old.

A month after the birth of her second daughter, Paula published a book on motherhood, entitled The Fun Starts Here. Her other books were: The Fun Don't Stop: A Practical Guide to Playing and Learning with Your Pre-school Child; The Little Boy Book; The Little Girl Book; Fruitcakes; Blondes: A History from Their Earliest Roots; Paula Yates Summary; Paula Yates Beauty Tips (subtitle: How to Look Like a Goddess When You Feel Like a Dog); Village People; Paula Yates - the Autobiography (published in 1995).

The Geldofs' unconventional relationship lasted 19 years, having survived Paula's well-publicised year-long affair with singer Terence Trent D'Arby3, but ended when Paula left Bob for Michael Hutchence, the lead singer with Australian rock group INXS. As she was effectively an employee of her husband, it became inappropriate for her to continue hosting the Big Breakfast so she left the show.

Paula gave birth to a daughter, Hutchence's only child, Heavenly Hiraani Tiger Lily Yates-Hutchence, on 22 July, 1996. Besotted Paula had a breast enlargement operation to please her lover. They were forced to spend a lot of time apart due to Hutchence playing concerts in Australia. Paula was torn between the two things she loved most. In November 1997, Paula informed him that she couldn't be with him as she couldn't bear to miss the precious time with her children. Just before he died, Hutchence phoned Geldof and ranted at him. After his death (he was found hanged in his hotel room), Paula slept on a pillow which contained some of his ashes. They had planned to get married on the Tahitian island of Bora Bora in January 1998.

Paula found out in May 1997 (thanks to comments made at his funeral) that her biological father was the TV presenter Hughie Green, (1920 - 97). Up till then, Paula had always believed that Jess Yates was her father and the revelation (made by someone outside of the family) was shocking and upsetting for all concerned.

There were some people who walked out because they thought that it was extremely bad taste and it was certainly, as far as I was concerned, probably the most bizarre funeral that I have ever been to or am ever likely to go to.
– Opportunity Knocks winner Bobby Crush commenting on the information revealed at Hughie Green's funeral.

It was revealled that Paula's mother, Heller Toren, had had an affair with Green not long after she married Jess Yates in 1958. Opportunity Knocks presenter Green was also married but enjoyed numerous affairs. The media had several field days with the story, including how Green's other children tried to contact their famous half-sibling.

In April 1998, Paula was admitted to a psychiatric hospital4 for treatment for depression and a nervous breakdown. She was bracing herself for a custody battle over Tiger Lily, with Hutchence's father in Australia. In June 1998, she lost custody of her daughters by Geldof. He became their main carer, they lived with him during termtime and the time during the school holidays divided equally between him and Paula. The loss of her children was something Paula couldn't deal with, and she attempted suicide by trying to hang herself.

Paula had met a new lover, Kingsley O'Keke, when she was recovering from her breakdown. The relationship lasted just six weeks. O'Keke sold the story of their affair to a newspaper, catapulting Paula back onto the front pages of the tabloids. The revelations placed her in a precarious position regarding custody of her children, and she battled depression again. At the time she was living with her daughter Tiger Lily in a house in Notting Hill, London. Paula took to drinking vodka and taking illegal drugs.

Paula died on 17 September, 2000, on the tenth birthday of her daughter Pixie. A close friend, Josephine Fairley Sams, telephoned and Tiger Lily, aged four, answered the phone. The child told the caller that she couldn't wake Mummy up. Mrs Fairley Sams came to the house and discovered Paula's body; she was in bed and covered in her own vomit. Empty vodka bottles and traces of heroin and cocaine were found.

On 23 September, Paula Yates's funeral was held at the church of St Mary Magdalene in Davington, Kent. Paula's last journey was in a white coffin, which was covered in a blanket of tiger lilies. Bono sang Blue Skies. At the end of the service, 'These Boots are made for Walking', which had been recorded by Paula, was played as the coffin was carried out. The service had been arranged by her ex-husband Geldof, and he did her proud.

The results of the autopsy on Paula's body were inconclusive; however, on 8 November, 2000, an inquest decided that death was due to 'non-dependent abuse of heroin'.

Paula's private life was beset by tragedy, and as a devoted mother, she never recovered from losing custody of her children. Paula's tragic death at the age of 41 left four young children motherless, and the youngest an orphan. Geldof was granted full custody of his daughters and eventually adopted Tiger Lily.

Although Paula had earned a fortune from her TV career and had assets of nearly £800,000 when she died, once her debts were paid off less than £14,000 was left. She bequeathed everything to Tiger Lily, who was due to inherit half her father's estate, estimated at ten million pounds. Unfortunately, after legal fees and costs there was deemed to be nothing left of Hutchence's fortune.

At a time when television's version of womanhood was either brainy and plain, or pretty and dumb, Paula Yates broke the mould, by being precisely what she wanted to be. She was frighteningly clever, outstandingly witty, intuitive and original; she was a free-thinker, and her shoes matched her handbag.
– Muriel Gray, journalist and arts commentator, and former co-host on The Tube.

When Paula guest-starred on Have I Got News For You, on 27 October, 1995, she memorably called team captain Ian Hislop 'sperm of the devil', in response to his jibe about her breast enlargement operation. The jovial spat was included in The Very Best of Have I Got News for You a compilation of classic moments from the first 23 series (1990 - 2002) of the popular BBC comedy show.

Paula had a cameo role in an episode of the Channel 4 soap opera Brookside in which she was interviewed in a boat by the character Karen Grant.

1Nicknamed 'The Bishop', he presented the ITV religious programme Stars On Sunday.2Paula interviewed film star Mel Gibson on the bed and after flirting throughout the interview to no avail she openly begged him to kiss her. Mel tactfully pointed out that his wife was an excellent shot and managed to duck out of the desired clinch.3Now known as Sananda Maitreya.4The Priory.