Heurigen - a Traditional Austrian Tavern Content from the guide to life, the universe and everything 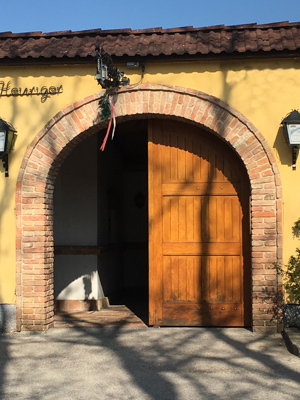 While in the UK people traditionally spend their evenings at the pub, people in eastern Austria typically go to the Heurigen to drink wine or cider and have a simple but filling evening meal. It is a great place to meet friends or hear the newest gossip.

Heurigen are typically found in the wine producing regions of eastern Austria. Most of them are run by farmers who not only sell their own wine or sometimes cider but usually also serve dishes made with their own meat, eggs and/or vegetables. Usually the whole farmer's family helps with cooking and serving the food. The concept is similar to the German Straußenwirtschaft, with the main difference being that Heurigen are open all year round and not only in a certain season.

The name 'Heurigen' comes from heuer (this year's), meaning the new wine of a year is served there. This is, of course, not strictly true as you may also get older bottled wine there. The official name for Heurigen is in fact 'Buschenschank'. This name comes from the Buschen/Büschel (bunch of twigs) that is traditionally hung above or next to the entrance of the Schank (tavern). This bunch of twigs is often decorated with ribbons and a light, to make it obvious to everyone that the Heurigen is currently open.

Unlike a Gasthaus (inn), each Heurigen is not allowed to stay open continuously. This leads to the farmer families of one village taking turns in opening their Heurigen for a week or two. There is usually one Heurigen open at all times in a village where wine is produced. There often is a sign in the village centre indicating which Heurigen is open at the moment, so all villagers know where to go. As these signs usually only give a name and no address a tourist may have to ask locals for directions. Today you may also find a list on the village's homepage.

The tradition dates back to the 18th Century when the emperor of Austria allowed everyone to sell and serve their own food, wine and cider. This laid the foundation for the development of the Buschenschank. Today, every Austrian state has their own laws regulating opening times as well as the food and drink that can be served. In general, Heurigen need additional permission to serve hot food. Some even serve lunch menus consisting of soup and a main dish. Larger Heurigen may have a variety of hot dishes in addition to cold food.

A Heurigen is usually a rather simple establishment inside a farm building or, if there is good weather, in the farmyard or garden. You may also be surrounded by various farm animals. You may eat your meal next to the cowshed, meet some stray chickens or be visited by the farm cats. Guests sit on simple wooden benches or chairs at wooden tables. If you have bad luck an old man with an accordion may show up and sing old songs in the local dialect, which makes half the room hope he will get his food served soon.

The main drink at a Heurigen is of course wine or cider (from apples or pears) from the barrel. The most popular way to drink wine is probably the Spritzer - 50% white or red wine and 50% sparkling water. It is usually served in plain glass mugs. In summer many prefer the Sommerspritzer, which contains more water and less wine and is served in half-litre glasses. You can also often order a pitcher of wine and a bottle of water for the whole table. The more high level wines of the house are sold at higher prices and served in smaller glasses. They don't come from barrels but are stored in bottles. In rare cases a Heurigen may also serve beer.

The most common kinds of wine in Austria are white Grüner Veltliner – which has by far the largest crop area – and red Zweigelt. Sturm is an immature wine which is only available in autumn. It is cloudy and can have various amounts of alcohol, depending on the state of fermentation. When you are done eating you may want to enjoy a schnapps.

For those who prefer a non-alcoholic option there is juice from whatever fruits the alcoholic options are made of. It is also often drunk with 50% sparkling water. Soft drinks are usually limited to Almdudler (a herbal lemonade that tastes slightly like ginger ale) and Frucade (an orange lemonade). 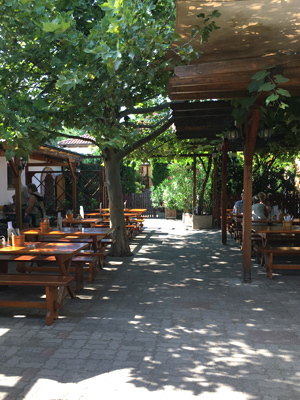 Every Heurigen has their own specialities, but there are also many dishes you can find at almost every one of them. The variety starts with simple things like slices of bread, boiled eggs and platters of cheese or cold meat like roast pork or ham. There are also many kinds of dark bread or other bakery products topped with a variety of meat, cheese, pickles and vegetables. Very commonly many dishes are served with grated horseradish, which can be anything from mild to eye-watering.

Bread is also served with various spreads like Liptauer (which contains quark, sour cream, onions and paprika spice), Schmalz (pig fat that is roasted until it becomes fluid and then cooled down to a white soft spread), Grammelschmalz (Schmalz with the crunchy bits that develop in the pan when boiling Schmalz), Schmalz and onions, Bratenfett (the fat that stays in the pan when you roast a piece of pig), or Leberwurst (finely minced meat and liver).

You can get many different cold meat dishes like Blutwurst (black pudding), Geselchtes (smoked pork), Presswurst (meat in aspic, usually served with onions, vinegar and oil) and Speck (smoked bacon).

There are also many different salads like potato salad, lettuce salad, white cabbage salad, cucumber salad or green bean salad. Most of the salads have a simple vinegar and oil dressing, but some may contain mayonnaise.

One of the most typical dishes at the Heurigen is the Heurigenjause or Bretteljause (Brettel = a wooden plate or cutting board; Jause = a snack or cold evening meal). In the past this was usually served on a wooden plate, but today ceramic plates are also common because they are better to clean. This plate contains a variety of sliced cold meat, cheese, sausages, spreads and a few slices of bread. Usually there is enough for two people.

If hot food is served this is usually Schweinebraten (roast pork), Kümmelbraten (roast pork with caraway), Surbraten (a roast made from salted pork), Fleischlaibchen (fried minced meat balls) and homemade sausages. They are usually eaten with just bread or salad as a side dish.

For dessert there are usually various homemade cakes.

Where to find them

In Vienna wine is produced on 637 hectares, mostly in the north of the city, so this is also where you find most of the Heurigen. They are only allowed to open in specific zones around the city but can be open continuously. Many Heurigen in Vienna are more like restaurants selling a variety of dishes, some at very touristy prices. There may also be paid musicians to please the tourists. A Viennese speciality is the Gemischter Satz, a wine produced from different kinds of grapes1.

Lower Austria has the largest area of land dedicated to growing wine in Austria. On 28,000 hectares in three different climates various kinds of wine are grown. There is the Weinviertel region in the north, the sunny valleys along the Danube and the Pannonian lowlands (for instance around Carnuntum) as well as the thermal spring region in the south. Especially in the south of the state you can find quite a few Heurigen that offer cider.

Burgenland is the most sunny and warmest state of Austria and is therefore ideal for growing wine, which is done on an area of 13,100 hectares all over the state. If you are lucky you may also be able to get your wine and food directly from the wine cellars.

Styria has about 4,600 hectares of land dedicated to growing wine, mostly in the south of the state. A typical Styrian wine is Schilcher, a kind of rosé. As a dish to eat at a Heurigen you may be offered Verhackert, a bread spread made from minced bacon and pork. If you are lucky you may also get to choose pumpkin seed oil on your salad, which is an almost black oil that is mainly produced in Styria.

1Not the same as Cuvée, where not the grapes but the finished wines are mixed.