Cabbages Content from the guide to life, the universe and everything 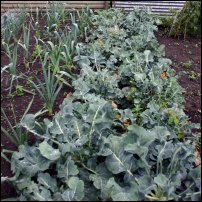 'The time has come,' the Walrus said,
'To talk of many things:
Of shoes – and ships – and sealing-wax –
Of cabbages – and kings...'
– Lewis Carroll

Known botanically as Brassica oleracea, and never the most glamorous of vegetables, the humble cabbage was first introduced into England by Sir Anthony Ashley, Earl of Shaftesbury. He imported the cabbage from Holland to his estate at Wimborne St Giles, Dorset in 1539. A statue of Sir Anthony replete with a carving of a cabbage at his feet may now be seen in the village church.

Belonging to the genus Brassica, the cabbage has, however, been a staple part of our diet for over 4000 years, and was brought to Europe from Asia by the Celts around 600 BC. Since cabbage grows well in cool climates, yields large harvests, and stores well during winter, it soon became a major crop in Europe.

Early cabbages did not, however, possess the firm-bodied head we are familiar with today, but had a rather more loose-leaved structure. The headed variety was developed during the Middle Ages by northern European farmers and, indeed, the English name 'cabbage' is derived from the French caboche, meaning head, and refers to its spherical form.

Cabbages grow best in a cool, moist climate, and particularly flourish near the coast. They prefer a firm, rich soil and tend not to form a heart if grown in light, loose soil.

Requiring only three months of growing time, by sowing seeds of different varieties at intervals, it is possible to achieve a steady supply of cabbages throughout the year.

It is said that one acre of cabbage will yield more edible vegetables than any other plant.

There are many varieties of cabbage, most of which fall into one of three main groups - spring, summer or winter cabbage. This refers to the time at which the mature vegetables are harvested, not planted.

Spring Cabbage. These are planted in the autumn to provide tender spring greens known as 'collards'. Spring cabbages are generally smaller than the summer and winter varieties and tend to be conical in shape.

Summer Cabbage. Maturing in summer or autumn, summer cabbages are generally spherical. The normal cycle is to sow the seed outdoors in April, to transplant the seedlings in May and to cut in August and September.

Winter Cabbage. Maturing in winter, these are also generally spherical or they may be drum-headed. They can be green or white in colour. The white varieties are used for making coleslaw and can be stored for months. The normal growing cycle is to sow in May, transplant in July and cut from November onwards.

Savoy Cabbage. Distinctive by way of their crisp and puckered dark green leaves, savoy cabbages are regarded as being winter cabbages. However, they have a broader harvesting span, having varieties which mature in September and others which mature as late as March.

Chinese Cabbage. Looking more like a cos lettuce than a cabbage, these have a tall cylindrical shape, and are the 'Chinese leaves' sold in supermarkets.

Red Cabbage. These cabbages tend to be more popularly grown in the rest of Europe than in gardening plots in Britain. We do, however, buy it pickled in jars and also see them displayed in supermarkets. If you do grow them, treat them as a summer cabbage and cut them in early autumn either for storage over the winter or for immediate cooking.

As may be discerned from the foregoing, cabbages can come in a fabulous range of colours, including greens, whites, purples, reds, pinks and combinations of these. Colored cabbages are used ornamentally and make attractive plants to place in window boxes and patio pots.

Being frost hardy, they are particular favourites during the winter, when there is little other colour in the garden. The colder the weather, the more intense the colour of the leaves. They have the further advantages of a long 'flowering' time from winter through to spring, and the pesky cabbage caterpillar is not around to attack them during the winter. There is also no reason why you shouldn't eat them.

Ornamental cabbages are often interplanted between other flowers in summer borders, and one may also see them in parks.

The cabbage has been revered since Roman times for its anti-cancer properties. Like all cruciferous vegetables1, which also includes sprouts, broccoli, cauliflower and kale, cabbages contain numerous anti-cancer and anti-oxidant molecules. Cabbages also speed up oestrogen metabolism which is thought to help block breast cancer. Cabbage also suppresses the growth of polyps, a prelude to colon cancer.

Cabbages have a high iron content2 and the high vitamin C content facilitates efficient absorption of this iron by the body.

Cabbage juice is high in folate, a water-soluble vitamin of the B complex, that occurs naturally in food, especially leafy vegetables3. Folate deficiency is associated with developmental 'neural tube defects' (NTDs), such as spina bifida and is essential for the production of red blood cells. Folate is required to prevent the anaemia of pregnancy and, in men, folate is required to ensure a viable sperm count4. Cabbage juice also contains sulphur compounds, such as sulforaphane, which has anti-cancer and antimicrobial properties. For example, sulforaphane has been shown to be effective at inhibiting Helicobacter pylori growth, this organism being strongly linked to duodenal and gastric ulcers, and stomach cancer.

On a precautionary note, sauerkraut, which is fermented cabbage, has been associated with migraine attacks.

The beneficial chemical compounds mentioned above are easily destroyed by boiling. Hence cabbage is best cooked briefly in the smallest possible volume of water, or by steaming briefly, or by rapid stir-frying in olive oil.

Red cabbage contains a water-soluble pigment molecule called flavin, which is an anthocyanin. Anthocyanins will turn red in acidic solutions, a rather muddy purplish blue colour in neutral solutions through to a beautiful emerald-green colour in alkaline solutions. Therefore, it is possible to use an aqueous extract from red cabbage as a pH5 indicator. Simply take a few leaves from a red cabbage and boil them in a saucepan of water. Pour off some of the resultant (usually purplish-coloured) liquid.

Divide this into a number of small clear tumblers (or test tubes, if you have access to laboratory facilities).

Then add a little of various household substances such as milk, lemon juice, vinegar, solutions of salt, washing soda, baking soda, bleach, etc, etc, and observe what colour the extract goes. Most people will know that vinegar and lemon juice are acidic, being dilute solutions of ethanoic acid and citric acid respectively, and you will find that these turn cabbage extract red. Baking soda and washing soda are alkaline and turn cabbage extract green. Milk is neutral. What colour does this go in cabbage water? It is fun to try a range of household substances to gauge how acidic or alkaline they are.

Weighing in at 124lb (56.24kg), the World's largest ever cabbage was grown by Dr Bernard Lavery in Llanharry, Wales in 1989. This monster covered an area measuring 12 feet by 13 feet. This is about 30 times heavier than an average cabbage. The previous World record holder weighed in at 123lbs (55.8kg) and was grown by William Collingwood of County Durham, England, in 1865.

1Name given to edible plants in the family Brassicaceae. A non-edible plant of this family is the wall-flower. The word 'cruciferous' pertains to the cross-like shape of the flowers.2Deficiency of iron in the diet leads to anaemia.3Folate gets its name from the Latin word folium for leaf. 4A male deficiency of folate can cause a 90% reduction in sperm counts.5pH is a measurement of acidity or alkalinity.