How to Boil an Egg Content from the guide to life, the universe and everything 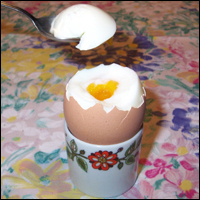 Boiled eggs are a common breakfast-time meal, but the question of how to make and eat the boiled egg has perplexed those preparing and eating breakfast respectively for eons.

It has even brought to the English Language the term, 'he/she couldn't even boil an egg', which jokingly pertains to an individual's severe culinary inability. However, this Researcher has known some people to reach the age of 20 without knowing how to boil an egg properly1. So here is a guide to making cooked boiled eggs at breakfast, how to get into them, and a few items of boiled egg trivia.

How to Cook Boiled Eggs

Firstly, boil enough water in the kettle to cover the egg. While the water is heating up, prepare the rest of the breakfast.

If you are removing the egg straight from the fridge, them prick the rounded end of the egg with a pin. This prevents the egg from cracking when put into the water.

When the water has boiled, pour the required quantity into the pan. Turn on the heat, and wait until the water boils furiously. Now add the salt and then you put your egg into the water, taking care not to burn your fingers. Try not to drop the egg in, as the shell will crack, causing the egg white to spill everywhere in the pan. You can use a slotted spoon if you don't want to get too close to the boiling water.

At this point it might be useful to ask the person who is having breakfast with you, or yourself, 'how you would like your egg?' (which is incidentally also a common chat-up line, used by the unoriginal to the unattainable). There will be a number of responses, but the most common answers deal with how long (approximately) the egg should be boiled for. Timing should start when the water comes back to the boil after you put the egg in.

The Four States of Egg

This is the egg with a runny yolk and a lightly-cooked white. The egg should be boiled for no longer than three minutes for this state to occur. This applies, regardless of how many eggs there are in the pan. The soft boiled egg causes the most problems, as there are many questions due to the timing and their safety. British guidelines state that those in vulnerable groups, ie, very young children, those who are pregnant and the elderly, should not eat this type of egg. On the other hand, this does take the fun out of consuming it, as you cannot have 'Eggy Soldiers' with them (see below).

This is the egg with a solid white and a completely solid yolk. Considered the safest, but also the less fun option. Boil for about eight minutes. This state of boiled egg inevitably causes problems due to timing, because if you remove the egg from the water too soon, you will end up with an egg with a soft centre.

Soft, but not Too Soft

This is generally regarded to be a solid white and a thick yolk which looks like it is coagulating around its borders. About a 4 or 5-minute egg.

Once the egg has been cooked for the required time, it is then time to remove it from the hot water. Use a slotted spoon to remove it, and carefully place it in an egg cup. If you like, you could place an egg cosy3 over the egg to keep it warm.

Boiling eggs becomes progressively more difficult the higher up you are, due to the lower air pressures in higher altitudes. As a result, if you are living up 'high', then you would have to alter boiling times. So:

How to Get into the Boiled Egg

When the egg is first placed in front of you, it will be too hot to touch. You could use this moment to sample your coffee or tea. When the egg is cool enough to touch but not cold, it is then you will have to break into it. There are two recognised methods of doing this.

Quite self-explanatory and accepted as the most fun, this does require some practice. The aim is to break the shell so that it can be peeled off easily. This can be achieved by lightly tapping the egg at either the pointed or round end with a teaspoon, and increasing the taps in strength until the shell breaks. At this point you can start peeling the eggshell off, exposing as much of the egg as you desire.

This is a slightly more complex way of getting into the egg. The aim is to remove the end of the egg (either one), by slicing off the top. This can be done by firstly breaking the shell at about a centimetre from the top of the egg via a sharp blow to the side with a teaspoon. Once this is done, support the egg by placing your finger on the top. With a sawing motion, cut horizontally to about two-thirds through the width of the egg. Then, gently flip the top over, thus exposing the egg.

The easiest method by far is the smash, although in polite company, the slice is the preferred option, due to (if you are lucky) less mess, and less noise.

Prior to taking your first mouthful, remember to pick out all the little bits of shell that may have fallen into the egg. Although they may add a new texture, they add no taste, and these shell bits may also be uncomfortable to crunch.

Boiled eggs can be eaten with other breakfast-time snacks. In fact, eggs are often served with conveniently sliced pieces of toast called 'Eggy Soldiers'.

What are 'Eggy Soldiers'?

The term is a misnomer, as when they are served to you they are neither eggy, nor soldiers. They are actually slices of bread, grilled to make toast, cut into rectangular pieces 2cm/1 inch wide, used to dip into the yolk of a soft-boiled egg.

How to Eat Them

You should have reached the yolk of the egg before you try to dip the soldiers in. Once you have, remember, do not be too zealous in dipping, as you may find the yolk being displaced all over the table and yourself.

When removing the eggy soldier from the egg, do not use a sudden pulling motion. This is because if you remove it too suddenly, the part of the soldier in the yolk will remain in the egg, while the rest is torn off. Treat the soldier gently, and you will facilitate consuming your breakfast morning meal without embarrassment.

An Interesting Thing to do With a Boiled Egg

Of course, the boiled egg is not necessarily just a breakfast meal. It can also be served as an interestingly decorated party snack.

Firstly, you need to hard boil as many eggs as you need. Once that is done, remove them from the water and let them cool to room temperature. Do not pour the water away. To the water add about one level teaspoon of powdered food colouring, or a tablespoon of liquid food colouring and mix so that it is evenly coloured.

Now comes the fun bit. Tap the eggs all over so that the shell is cracked but remains on the egg. When you have done this to all the eggs, put them back into the pan, cracked shells still on, and let them simmer for about 10 to 15 minutes.

When this is done, remove the eggs from the pan. Again, let them cool so that you can handle them without burning your fingers. Once they are cool, peel the shell away. For help with peeling eggs, check out the BBC link on 'How to Peel Hard-Boiled Eggs'.

What should be visible is a strange yet quite beautiful marbling effect on the surface of the boiled egg, which would make for rather interesting small talk about where the host sourced their eggs.

The boiled egg not only is food, but has been used in other ways; it has been used as an example of political satire, as a comic prop, and in gambling. (There is that classic scene in Cool Hand Luke, where the eponymous Luke has to eat 50 hard boiled eggs to win a bet.)

Taken from Gulliver's Travels by Jonathan Swift, this relates to the war waged by the Lilliputians against their neighbouring state on the matter of whether it was better to break into the boiled egg at the 'big-end' (the more rounded end) or the 'little-end' (the pointed end)4. This argument wasn't resolved peacefully, and eventually turned this tiny difference of opinion on such a small and insignificant matter into full-scale war.

Swift was using the boiled egg concept as political satire and vicious diatribe against the seemingly pointless wars that 18th Century British Government had declared against their neighbours for equally small and insignificant matters5.

Reeves and Mortimer are two British comedians who use boiled eggs as part of their comic sketches. More information on these comedians par excellence can be found in the entry Vic Reeves and Bob Mortimer.

They use this unusual comic prop in Bang Bang, It's Reeves and Mortimer, where boiled eggs emerge from the mouths of recently deceased people. In the first series of the remake of Randall and Hopkirk (deceased), there is a scene where Marty Hopkirk (played by Vic Reeves) finds his dad (also played by Vic Reeves) in the afterlife, condemned to eating boiled eggs for eternity.

1This entry is for you.2In the UK, British Egg Industry Council approved fresh eggs have the 'Lion' mark stamped on the side, denoting 'Lion Quality' status. This pretty much guarantees a good quality egg, from hens vaccinated against salmonella and the best before date stamped on the side.3A small woollen or felt hat, placed over the exposed part of the egg(s).4Now not just a literary term, the big/little endian term has also been incorporated into computer science.5The Swiftian boiled egg analysis can also be applied to political or military disputes anywhere; past, present and future. Additionally, it can be applied pretty well to the origins of deeply seated grudges and to long running family/ex-best friend/ex-partner feuds.