Austria - a virtual tour: Lower Austria Content from the guide to life, the universe and everything 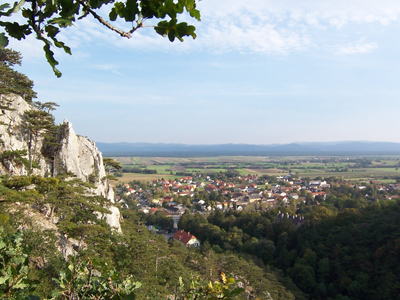 Lower Austria is the largest state of Austria and lies furthest to the north, adjoining the Czech Republic and Slovakia. It completely encircles Austria's capital Vienna, which is a separate state, and is a neighbour to Upper Austria, Styria and Burgenland. Lower Austria is the oldest part of Austria - all the other states were added later. It also lies in about the centre of central Europe and has many important international trading routes.

The eastern end of the Alps lies in Lower Austria and its highest mountains in the south are about 2,000 metres, getting lower the closer they get to Vienna. Towards the north the landscape gets flat, with a plateau in the north west, next to the Czech border. The north east has low hills and is known as good farmland, plus there are many vineyards. Around Vienna lies a large basin and low mountains with thermal springs which are used for swimming; there are even historic public baths from the 19th Century which are still in use. All over Lower Austria there are many castles, palaces and rich monasteries to see. The climate is very diverse in the different regions of Lower Austria and ranges from dry continental climate in the basin of Vienna, to alpine climate in the south, and wet atlantic climate north east of the mountains.

In north western Lower Austria there is a lot of farmland for growing poppies - sweet dishes made from poppy seeds, like cakes, are very popular. Apricots are used as fillings for dumplings and in spring asparagus is grown.

In about the centre of Lower Austria lies Sankt Pölten, which has been the capital of the state since only 1986. Before that the government was situated in the city centre of Vienna. After a public opinion poll made Sankt Pölten the capital, a new district was created, with government buildings and the museum of Lower Austria constructed in a contemporary architectural style.

North of Sankt Pölten lies one of the most beautiful landscapes along the Danube, the Wachau valley, which is recognised as an UNESCO World Heritage Site. The meandering river flows through green hills and passes numerous old towns, impressive Baroque churches like Stift Melk and castle ruins like Aggstein. The climate around the Danube and the hills helps to grow one of the best wine grapes of Austria. Bicycle routes and boat tours are very popular.

North of the Wachau, on a high hill in the plains, lies the castle Rosenburg. The large Renaissance palace has its roots in the Middle Ages and its small historic gardens and the huge tilt yard are just as interesting to see as its interior. The castle is also home of a falconry museum and shows with birds of prey take place every day.

At the border to the Czech Republic lies the Nationalpark Thayatal, which continues across the border as Národní Park Podyjí. The large valley of the river Thaya lies between the continental and central European climates, which leads to a diversity of plants and animals. Oak and beech forests and large meadows are for instance the home of wild cats.

An impression of what Lower Austria was like in about 1900 is exhibited by the outdoor museum Niedersulz, close to the Czech and Slovakian border, further to the east. 80 historic buildings with gardens and animals show the lives of people in Lower Austria over 100 years ago.

To the south, between Vienna and the Slovakian capital Bratislava, lies the Nationalpark Donauauen, a large area of floodplain forests and meadows along the Danube. It is the biggest intact habitat of its kind in Europe and the home of numerous water birds, amphibians and fish.

Situated at the southern shores of the Danube, close to the Nationalpark, is what was once the capital of the Roman province Pannonia: Carnuntum. During the last centuries archaeologists found many traces of the Romans which have been collected in the biggest Roman museum of Austria. So far three houses and a Roman public bath have been reconstructed on site, complete with functioning kitchens and floor heating.

In the south, at the border to Styria, is the world's oldest railway over a mountain. The UNESCO World Heritage Semmeringbahn crosses the Semmering mountain via many small tunnels and viaducts. Its highest point lies at almost 900 metres. The railway was built in the middle of the 19th Century and connects Vienna with Graz, Villach and Italy. 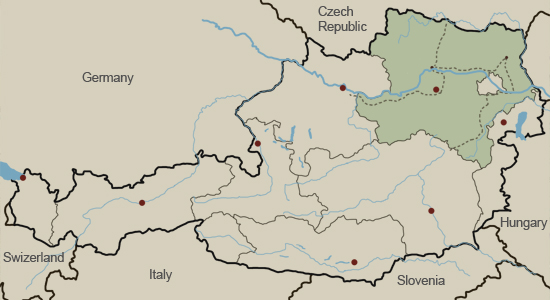