Austrian Dumplings Content from the guide to life, the universe and everything 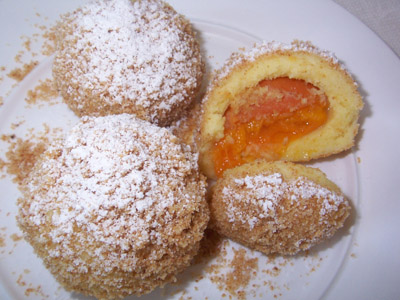 Dumplings are generally balls of dough that are usually boiled in water. Similar food, meat or fruit inside of balls of dough, has been prepared like this for thousands of years. A great number of different dumplings   – or 'Knödel' – are known in Austria, often quite similar to varieties of dumplings that are found in the surrounding countries. Traditionally dumplings were eaten on certain days. They come in savoury as well as sweet variants and can be eaten as a main dish, side dish or dessert.

You should always make dumplings with wet hands so they don't stick to your fingers. For boiling the dumplings always use the widest pot you have. Boil a very generous amount of water to give the dumplings plenty of space to bob around and rise to the surface of the water. If you don't have a large saucepan, boil them in smaller batches, keeping the first batches warm in a dish in the oven on a low heat. Otherwise you might find they join together into one big soggy dumpling.

Semmelknödel are eaten as a side dish to various meats with gravy, lentils or mushrooms in a creamy sauce. In Austria dried bread cubes for these dumplings can be bought in every supermarket.

Cut the rolls into cubes of about 2 cm and fry them gently in butter with the onions until they get crispy, but don't let them get brown. Add parsley and allow the cubes to cool. Mix milk, eggs and salt, pour over the rolls. Then add flour and mix it with your hands. The bread cubes should still be visible. Let it all soak for a bit. Shape the dumplings with wet hands.

Put them into simmering but not boiling salty water for about 15 - 20 minutes, until they float to the surface.

The finished Semmelknödel can be sliced, fried with onions and poured over with beaten eggs, then seasoned with salt and pepper. Most of the dish should consist of dumplings, not of eggs. Let them roast until the egg is done, then serve with some parsley or chives. Serve with a side dish of salad.

Tiroler Knödel are very similar to Semmelknödel but are eaten as a main dish with salad (usually lettuce with an oil and vinegar dressing). They can also be eaten in soup; put the whole dumpling into a soup bowl and pour soup over it.

Serviettenknödel are the more advanced alternative to Semmelknödel. They are eaten as side dish to pork, game or poultry.

Cut the crusts off the rolls and cut them into small cubes. Mix milk, eggs, salt and nutmeg, then pour over the cubes of bread. Melt the butter and pour it over the bread. Take a clean cotton napkin1 or something similar, soak it in water and spread some more melted butter over it. With wet hands, roll the bread mixture into a sausage shape, lay it on the cloth, then roll the cloth around it. Tie both ends of the cloth with string and boil it in salt water for half an hour. Serve the dumpling in slices of about 2 cm.

These dumplings are made from raw potatoes. They are eaten as a side dish to pork, poultry and game.

Peel and grate the raw potatoes, then squeeze some of the juice out of them. Peel the cooked potatoes, mash them and mix with the raw ones. Add salt and flour, then form dumplings. Let them boil for about 20 minutes in salted water.

Meat dumplings are eaten as a main dish with Sauerkraut or salad.

Kaspressknödel are a dish from Tyrol. They are eaten either in beef soup or with salad.

Cut the rolls into cubes and chop the onion finely. Sweat the onion2 in a frying pan with butter, then add it to the rolls and season with salt and nutmeg. Mix milk and eggs and cut the cheese into small pieces, then mix both with the rolls and onion mixture. Finally add flour and parsley. Shape the mixture into balls, then slightly flatten them so they're flat on two sides, but not too thin. Fry them in a pan with oil or butter.

Leberknödel are usually eaten in beef soup, which is one of the standard soups in every Austrian restaurant. They can also be eaten as a main dish with salad.

Cut the rolls into pieces and let them soak in some milk, if the mixture becomes too wet squeeze some milk out of the rolls. Finely chop the onion and fry it in a pan with butter before mixing it with the rolls. Mix liver and egg and season it, then add it to the rolls. Finally add breadcrumbs and shape into dumplings. Boil them in water or beef broth or alternatively fry them in oil.

Sweet dumplings filled with apricots or plums are eaten either as a main course or dessert.

Boil the potatoes in their skins and peel them, then mash them and let them cool a bit. Add semolina, flour, butter and salt and mix. Add more flour if necessary. Leave to rest for half an hour. Wash the apricots and remove the stone, put one sugar lump into every fruit, then cover every apricot with dough about 1.5 cm thick and make dumplings. Put them into boiling salt water, they are done when they swim at the surface.

Take the stone out of the plums and replace it with a lump of sugar. Boil, peel and mash the potatoes, then mix with curd cheese, flour, semolina, butter and salt. Leave to stand in the fridge for half an hour.

Put some of the dough around each plum about 1.5 cm thick and shape into dumplings. Let them boil in salted water for about 15 minutes. Fry breadcrumbs in melted butter, then cover the dumplings with the crumbs, put them onto a plate and sprinkle sugar over them.

Mix curd cheese, semolina, melted butter, egg and a pinch of salt. Make dumplings; you can fill them with any fruits you like or just leave them without filling and serve some sweet fruits separately. Cook them in simmering water, then cover them with breadcrumbs fried in butter. Sprinkle sugar and/or cinnamon over the dumplings once they are on the plate.

Make a dough from flour, yeast, sugar and lukewarm milk. Leave it to rise in a warm place, then add butter, sugar, yolks and salt and leave to rest again. Roll the dough flat and cut it into even sized pieces. Put some plum jam on every piece, then wrap the dough around it to make dumplings. They should be a bit bigger than your fist. Leave these dumplings to rest in a warm place for another 30 minutes. Let them boil in salt water, the time depends on the size of the dumplings. Turn them over in the water, so both sides get boiled.

Melt butter in a pot and pour it over the finished dumplings, then cover them with poppy seeds and sugar.

1Serviette.2Soften without colouring the onion.