Goose and Carp, Traditional Austrian Christmas Dishes Content from the guide to life, the universe and everything 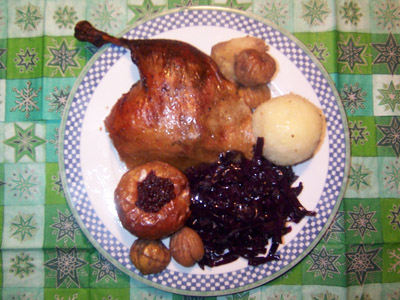 Is the festive season drawing near and you're still planning your Christmas banquet? Would you like to offer your family or guests something both unusual and authentic? We offer you two complete, traditional Austrian Christmas menus, which will entice you with their delightful, appetising sounding dishes.

This Entry will probably make your decision even harder – by introducing two separate menus to you, both of which are tried and tested meals, direct from an Austrian kitchen. Truly a feast!

Goose is a very typical Austrian Christmas dish. The 'Goose Season' begins on the Feast of St Martin, 11 November, when folk traditionally gather together to eat this bird. On that day people eat the Martini Gansl while at Christmas they eat a Christmas goose. In fact they are both the same.

If you like goose, this is exactly the right menu for you. You can also cook duck, which some people prefer, using the same method.

Put the goose, cut roots, peppercorns and salt into a bowl with water and cook until the meat is soft. Drain it. Pull the meat off the bones, remove the skin, then cut the meat into small pieces.

Gently melt the butter in a pot, then add the flour and stir. Add the goose soup and let it boil until creamy. Add the meat, salt and pepper. Lastly, put in the cream and egg yolk. Sprinkle the parsley into the soup.

Usually Bröselknödel (breadcrumb dumplings) are put into this soup as well.

Mix milk, egg, butter and oil and add the spices. Put in the breadcrumbs and flour. The result should be a really soft dough. If it is too dry, add some milk. Let it rest for 15 minutes.

Make small dumplings of about the size of a golf ball and let them simmer in soup or water for 5 minutes.

Make a cut into the outer shell of all the chestnuts with a sharp knife. Put them into the oven at about 220°C for half an hour with some water so they don't get dry. Peel them.

Gut and clean the goose, then rub marjoram, salt and pepper on the outside and just salt and pepper inside. Peel the apples, core them and cut them into rather large pieces. Put the apples and peeled chestnuts inside the cavity of the goose. Then close up the goose with string and toothpicks.

Preheat the oven to 180°C. Put the goose breast down into a pan with some water and then put it into the oven. First roast the goose at a high temperature, later turn down the heat. Baste the goose with its drippings1 while roasting it to prevent the skin from burning.

After about two hours (depending on the size of the goose) turn the goose over, onto its back. Put it back into the oven for another one and a half to two hours.

Serve with Rotkraut and potato dumplings. If there is any dripping, ie the goose fat, left over from the cooked goose, save it, store it in jars and eat it cold on bread.

Sprinkle salt onto the cabbage. Roast the bacon in a pot with some oil, then add the finely sliced onion. Add the sugar when the onion is golden. Put the cabbage, salt, pepper and apple into the pot. Then add the wine. Let it stew until the cabbage is cooked to your preference, but at least until the apple is not visible anymore.

Peel and grate the raw potatoes, then squeeze some of the juice out of them. Peel the cooked potatoes, mash them and mix with the raw ones. Add salt and flour, then form dumplings. Let them boil for about 20 minutes in salted water.

Grate the orange peel from one orange and let it boil with water and sugar. Squeeze the juice out of the oranges and add some water until you have about one cup of fluid. Add the lemon juice and cornflour. Pour the mixture into the boiling water and quickly bring to the boil while stirring.

Let it cool in a bowl and add whipped cream, if you like.

In Eastern Austria especially, many carp are raised in ponds and frequently end up on the Christmas dinner table.

Mix the mayonnaise with all the ingredients except for the eggs, and add salt, pepper and sugar. Cut the eggs in half and put the mayonnaise on top. Decorate with lettuce.

Clean and descale the carp. Cut it in half, wash it, dry it with a cloth and then cut it in portions of about 150g. Put lemon juice and salt on the fish.

Put the flour in a soup bowl or shallow dish. Do the same with the eggs in a second bowl; add milk, whisk together with a fork. Then put the breadcrumbs into a third, similar shallow dish too. Put each piece of fish first into the flour, making sure it is coated on all sides. Then dip it into the egg mixture and lastly the breadcrumbs.

Fry the carp in a pan with fat until it is golden-brown. Serve it with slices of lemon (many people like to sprinkle the juice of the lemon onto the fish before eating it) and potato salad or salted boiled potatoes.

Boil the potatoes, peel them and cut into thin slices. Chop the onion finely. Then put both into the mayonnaise with spices, stir the salad gently.

Boil the pudding powder with sparkling wine instead of milk and let it cool down. Add the apples.

Make a dough from all ingredients and let it rest for half an hour in the fridge. Grease a pie pan, then line it with the dough and fill it with the cream. Let it bake for 1½ hours at 150°C.

Let it cool down and put it into the fridge overnight. Serve cold.

1In other words, pour the juice from the meat over the goose.2corn starch for our readers in the US.3Carp may be available in specialist Polish delicatessens in the UK, and also in large supermarket chains.4A sort of blancmange, or custard powder, for those in the UK.