Poppy Seed Tarts Content from the guide to life, the universe and everything 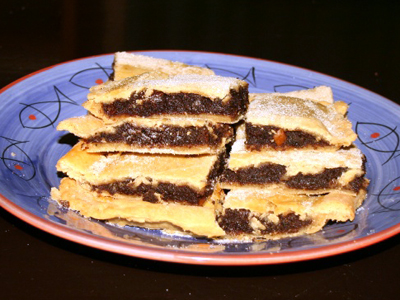 Researcher minorvogonpoet passes on to us her mother-in-law's recipe for these delicious tarts:

Poppy seeds are small blue-black seeds with a nutty taste. Although they come from the opium poppy, they don't have any narcotic effect. They are are often used in Central European food, to give flavour to cakes, bread, biscuits and spreads. Poppy seed sweetmeats were traditional among the Jewish communities in Central Europe, and were often eaten at the festival of Purim.

This recipe was given to me by my mother-in-law. She was born and brought up in Hungary, and studied at Budapest University. At the beginning of the Second World War, she arrived in England after a four-day train journey through Europe. She was glad to be in Britain, but kept up some of her Hungarian traditions – including these poppy seed tarts. We used to refer to them as 'poppy seed cake' but, as they are pastry-based, 'tarts' is more accurate.

My mother-in-law had a poppy seed mill, which looked like an old fashioned mincer. However, it is much easier to grind the poppy seeds in a coffee grinder!

To prepare the filling, first grind poppy seeds in a coffee mill. Put the ground seeds in a saucepan with raisins/sultanas, lemon juice and milk. Simmer at low heat for 3 to 4 minutes, stirring. Add sugar and allow to cool.

Preheat oven to 200°C. To make shortcrust pastry, cut margarine or butter into small pieces. Then add to flour, sugar and salt in a bowl. Rub margarine into flour, using fingertips until the mixture resembles fine breadcrumbs. Add a little water and stir with a metal spoon until the mixture forms a soft dough.

Divide the dough into two portions. Roll out one on a floured surface, and place it in the bottom of a greased baking tray. Cover with filling. Roll out the second portion and use to cover filling.

Bake for 15 minutes, or until firm and brown. Cut into slices and allow to cool.

In Britain, poppy seed tarts are something of a novelty. You may have to persuade your guests that they are worth a try. However, once they are convinced, these delicious little tarts will soon go!