Austria - a virtual tour: Tyrol Content from the guide to life, the universe and everything 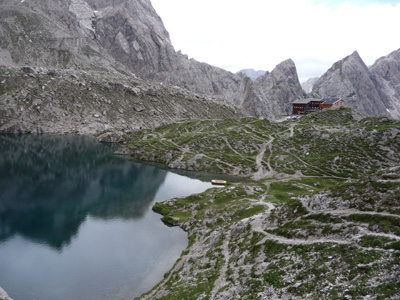 The Austrian Federal State of Tyrol is today divided into the two regions of North Tyrol and East Tyrol. The regions are not connected to each other, because South Tyrol has been part of Italy since 1918. As both Italy and Austria are part of the European Union, the connection over the whole region of Tyrol has grown stronger again since then and there are still hardly any cultural or linguistic differences. Apart from Italy, Tyrol also shares a border with Germany and Switzerland and is connected with the Austrian states Vorarlberg, Salzburg and Carinthia.

Valleys with rivers, forests and clear mountain lakes, and the highest mountains of Austria with peaks over 3,500 metres shape the landscape of Tyrol. From east to west through all of North Tyrol runs the Inntal, the valley of the river Inn, and many valleys and rivers join it on its way. Because of the high mountains, the climate is different in every valley, but generally they experience wet summers with high daytime temperatures and lots of snow in winter, especially in the north. Many tourists come to Tyrol to go skiing in winter and hiking or climbing in summer. Many other tourists do not stay in the area but drive through Tyrol from Germany to Italy, which usually leads to major traffic jams in every holiday season.

Typical specialities of the Tyrolian cuisine are dumplings and Gröstl, made from roast potatoes, onions and bacon. A typical Tyrolian cheese is Graukäse (grey cheese), a crumbly mould cheese. Many farmers make their own cold smoked bacon, which is used in many recipes.

Tyrol's capital Innsbruck is situated on the river Inn, between two mountain ranges, right in the middle of North Tyrol. In the 15th and 16th centuries, Emperor Maximilian I made Innsbruck an important political centre and was an important influence on what it looks like today. The city's most famous building, the 'Goldene Dachl' (golden roof), was built during this time and the empty tomb of Maximilian I1 is a thing every tourist must see. The tomb, in the church of the palace in Innsbruck, is encircled by 40 bronze statues. There are also various museums, the palace 'Schloss Ambras' and the baroque palace containing the Imperial apartments of the Habsburgs. Additionally Innsbruck was the location of the Winter Olympics in 1964 and 1976 and is still a popular place for winter sports. Visitors who want to learn more about the animals that live in the surrounding mountains can go to the 'Alpenzoo', where about 150 different species can be seen.

The mountain range to the north of Innsbruck, at the border to Bavaria, is the Karwendel, which is Austria's largest nature reserve. Its high rocky peaks are the home of the largest population of golden eagles in the country and the mountain streams and natural forests are inhabited by many other animals and rare plants.

East of Innsbruck lies the 700-year-old town called Hall in Tirol. Many of the historic buildings there, even the ones from the middle ages, are still intact. Close to Hall in Tirol is another very popular tourist attraction: the 'Swarovski Kristallwelten' - a glittering wonderland of kitsch at the home of the Swarovski company. Further to the east, in Kramsach, the open-air museum of Tyrolian farms shows 14 farmhouses and adjoining buildings from different valleys. The buildings and their interiors have been transferred from their original locations and rebuilt.

Going south east from Innsbruck through the neighbouring state of Salzburg, you reach East Tyrol via a route crossing the mountain range of the Hohe Tauern. The Nationalpark Hohe Tauern is the biggest national park of the Alps and lies between Salzburg, (East) Tyrol and Carinthia. At 3,798m, the highest mountain in the park is also the highest mountain of Austria, the Großglockner. All species of plants and animals living in the Alps can be found in this national park. The landscape is made up of glaciers, high cliffs and alpine meadows.

The usual way of going from west to east in Austria leads to the Bavarian border. At the end of the Inntal lies the town of Kufstein with its impressive medieval castle. There is no motorway connection from Tyrol to the eastern states of Austria so the way leads through the so-called 'Großes Deutsches Eck', the 'Large German Corner'. This means driving on the motorway through Germany for a while until you reach Salzburg at the other side. 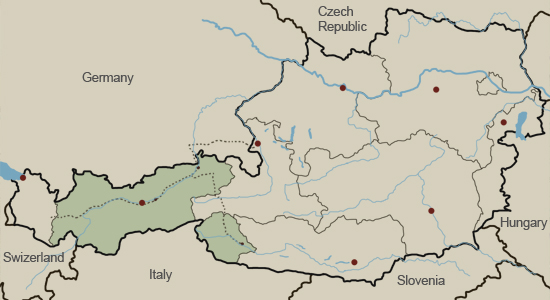 1His actual grave is in Wiener Neustadt, Lower Austria, the city where he was born. He changed his mind about the location shortly before his death.