Austria - a virtual tour: Burgenland Content from the guide to life, the universe and everything 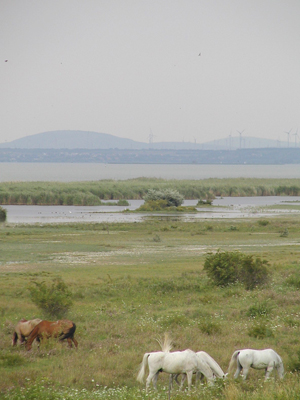 Burgenland is the most eastern state of Austria and lies next to Slovakia, Hungary and Slovenia as well as the Austrian states Styria and Lower Austria. It covers a rather narrow area with a long extension north to south. Before the 1920s Burgenland was part of Hungary, and later bordered the Iron Curtain. Its historic position at the border still influences the area today. Next to German, important languages spoken in Burgenland are Croatian, Hungarian and Romani.

Soft hills and low mountains at the border with the other Austrian states make up most of the landscape of Burgenland. The highest mountain is only 884 metres high. Burgenland lies at the rim of the plains of Hungary and sits at the outer regions of the continental climate, having very warm summers, cold winters and little rain. The climate and landscape make Burgenland a good place to grow grapes for wine.

Food from Burgenland is still influenced by its Hungarian roots, with lots of tomatoes, onions, sweet peppers and paprika. Poor farmers in Burgenland always ate lots of soup and stews, and fish from the lake. An important food product of Burgenland is goose which is eaten at Christmas.

Near to the border with Lower Austria, at a junction of the motorway from Vienna, lies Burgenland's capital Eisenstadt, the smallest capital of any Austrian state. In the era of the Austrian Empire, the most powerful family in northern Burgenland and parts of Hungary was the Hungarian Esterházy family, who built a palace in Eisenstadt. The building got its classical façade in the 19th Century and is still owned by the Esterházy family. Eisenstadt was also the home of the composer Haydn, who worked for the Esterházys for a long time: a museum has been installed in his former home and his grave can be visited in the Bergkirche. The Burgenland state museum shows the history and arts of this area.

East of Eisenstadt lies the Neusiedlersee, which reaches from northern Burgenland to Hungary. The Neusiedlersee is the biggest steppe lake of Europe, meaning that almost all of the water in it is brought not by rivers or creeks but solely by rainfall and the water only leaves by evaporation. The lake covers an area of about 320km2 but is only up to 2m deep. The area is influenced by many different climates, from alpine to Mediterranean and continental. Large areas of reed, water, steppes and salty meadows are home to an incredible number of birds. Both the Austrian and the Hungarian part of the lake are a National Park and also a UNESCO Cultural Heritage Site.

North of the lake, in Mönchhof, is an open-air museum of 35 buildings which show the life in a village in Burgenland between the late 19th and early 20th Century.

Many picturesque villages and small towns with typical farm buildings and underground wine cellars can be found around the lake. One of them is Mörbisch, where popular 19th-Century operettas are shown every summer on a stage in the lake. A very common sight in this area are also the large nests of storks on chimneys. Originally many of the houses around the lake had thatched roofs, but at some point most of the thatches were replaced with tiles.

Further to the south east, close to the border to Lower Austria, lies the village of Forchtenstein and the medieval Castle Forchtenstein on the mountain above it. The castle has been owned by the Esterházy family since the 17th Century and houses their weapons collection, archives and cabinet of wonders.

In southern and central Burgenland there are many castles, like the medieval castle in Güssing, the Castle Lockenhaus or the Renaissance castle in Lackenbach. Another thing that can be found all over Burgenland are thermal springs which are used for swimming, so there are many large spas.

Burgenland is the last of the nine states of Austria. From here your journey can either go back to the west through Styria or Lower Austria, or you turn eastwards. Budapest is only about three hours away, or you can reach the coast of Croatia in the same time, a route that many Austrians take each summer. 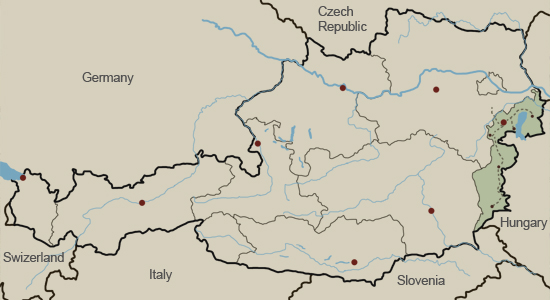