Austria - a virtual tour: Carinthia Content from the guide to life, the universe and everything

Carinthia is the southernmost state of Austria and adjoins Italy and Slovania as well as the Austrian states Tyrol, Salzburg and Styria. South-eastern Carinthia has a rather high percentage of Slovenian-speaking residents.

The higher regions of Carinthia lie in the west, where it touches Tyrol and Salzburg, while the east is mostly influenced by the basin around the capital Klagenfurt. The climate is influenced by Carinthia's location south of the Alps and can often seem almost Mediterranean in summer, although winters are cold and a large pool of especially cold air can assemble in the basin. Due to the many large lakes in Carinthia it is a very popular holiday destination for Austrians in summer.

Almost every Austrian who wants to go to Italy during the summer passes the city Villach on their way on the motorway. From there Venice can be reached in only 2 hours and the Slovenian capital Ljubbljana is only one hour away. Villach lies at the Drau, the largest river of Carinthia and is encircled by lakes. The medieval city square of Villach is surrounded by small alleys with many historic buildings. The thermal springs of Villach have been in use for swimming and therapeutic reasons for a very long time; the oldest pool here was built by the Romans. A new public bath with contemporary architecture was opened in 2013.

East of Villach lies the Wörthersee, the largest lake of Carinthia and one of the warmest lakes in the Alps. At the other end of this longish lake lies Carinthia's capital Klagenfurt. Villages and towns with historic churches, old hotels, villas, palaces and other interesting buildings lie along its bank. Since the 19th Century the Wörthersee has been a popular holiday destination. At the same time the most important towns along the lake are connected by boat.

Klagenfurt, the capital of Carinthia, lies on the eastern shores of the Wörthersee. An old canal, which was used for transport, connects the city center with the lake and the former location of the city walls is now a ring of parks. Klagenfurt is home to various museums and old churches and has many buildings from the 16th and 17th Century. The cathedral of Klagenfurt was built in the 16th Century. Another important building of the Renaissance period is the Landhaus, seat of the government of Carinthia. Visitors can see the most impressing halls of the palace-like building. The landmark of Klagenfurt is a fountain in shape of a large dragon that spews water from its mouth.

Northeast of Klagenfurt lies the village Maria Saal, which is the home of the open air museum of old farm houses from all over Carinthia. It also has a large church from the 15th Century and on a field near the village stands the so-called 'Herzogstuhl', a stone chair which was used in ceremonies in the middle ages.

Only a short distance north east from Maria Saal lies the Magdalensberg, a mountain with a Roman town on its summit. The original settlement was an important trading post of the Celts which was later replaced by a Roman town. Today the Roman houses are being excavated and partly reconstructed.

The castle Hochosterwitz lies north of the Magdalensberg, which was built in the middle ages and 'modernised' in the 16th Century. A meandering street, with 14 gates, leads up from the plain to the castle on its rocky hill. Today it can also be accessed by a lift.

The motorway leaves Carinthia in the east, going though a valley that leads to the border of Styria. 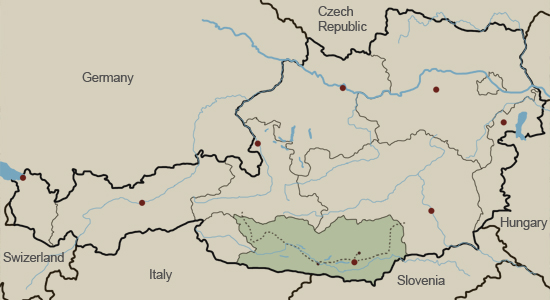