Austria - a virtual tour: Styria Content from the guide to life, the universe and everything 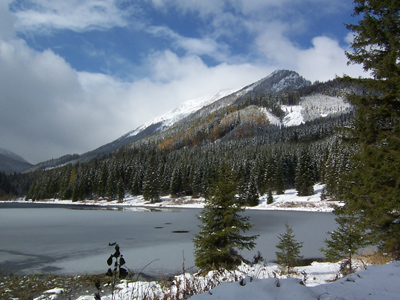 Styria reaches from the middle of Austria to the south, where it has a border with Slovenia. Part of Slovenia in fact belonged to Styria before World War I. The state also adjoins the Austrian states Carinthia, Salzburg, Upper Austria, Lower Austria and Burgenland.

Styria is the Austrian state with most forests; they cover about 60% of its area. The western and northern parts of the state contain part of the Alps, with peaks of about 2,300 metres. The highest mountain is the Dachstein at the border to Upper Austria, with a peak of almost 3,000 metres. The south and east are hilly and have many thermal springs which are used for baths and vineyards, where farmers sell their own products.

The most famous Styrian food is probably the green - almost black - oil made from roasted pumpkin seeds, which is used for salad dressings, soups and many other dishes. Potato salad with pumpkin seed oil can for instance be eaten as a side dish with fried chicken. Another typical food is Klachlsuppe, a soup made from pigs' feet, which is often eaten with Sterz, a simple dish made from flour, water and fat.

Styria's capital Graz is the second biggest city of Austria1. Its city centre, with many historic buildings and small alleys, is recognized as a UNESCO World Heritage Site. Like an alien blob of ooze, the modern art museum flows between the historic buildings and their red tiled roofs. Every visitor to Graz should walk up the long staircase (or take the lift) up the rock cliff to the old clock tower, which is the landmark of Graz, to look at the city from above. Many historic buildings, churches and museums can be found in the large historic centre. Part of the UNESCO heritage is the 17th Century Baroque palace Eggenberg at the western rim of the city. The palace has many painted halls and a large park where a new archaeological museum was built to contain important items from Styria. A unique museum in Graz is the Landeszeughaus, the original central armoury of Styria from the 17th Century - 32,000 weapons and suits of armour are piled up in racks on the four storeys of the narrow building.

The lives and homes of farmers during the last 600 years are shown in the open-air museum in Stübing (a bit north of Graz), which has a collection of historic buildings from all over Austria. All the buildings show the typical regional style from their original location and are situated in a small valley surrounded by forests. The gardens, animals, fields and interiors give the impression of a village that is still lived in.

Many palaces and castles can be found and visited in Styria. One of them is the Riegersburg, east of Graz. Three kilometres of defensive walls secure the 850 year old castle on its high rock. North of the Riegersburg lies Herberstein Castle, also up on a rocky hill. Its foundations are from the 12th Century and styles from different centuries have influenced today's look of the building and its historic gardens.

The church in Mariazell in northern Styria has attracted many pilgrims since the 13th Century. Today the large basilica, constructed in the Baroque style, absolutely dominates the surrounding village in the mountains. Ever since the church was built, there have been stalls selling votive offerings to the pilgrims and the gingerbread from Mariazell is now known all over Austria.

Further to the west lies the Erzberg. For centuries people have mined for iron ore on this mountain, first in tunnels, and later above ground giving it a more and more surreal shape with many terraces.

Styria's forests can best be seen in the Nationalpark Gesäuse, where natural forests and floodplains are still preserved. From the racing mountain stream to the highest peaks there is a difference in height of 1,800m, which gives space for many different habitats with various plants and a great variety of birds.

Only a short way west of the Gesäuse, encircled by mountains, lies the monastery Stift Admont. For almost 1,000 years the monks have collected about 200,000 books in their huge library, which today is decorated in Baroque style. Additionally the monks collected historic and modern art and have assembled an important range of exhibits in their museum of natural history2.

Even further to the west, at the border to Salzburg and Upper Austria, lie the historic spa towns of Bad Aussee and Altaussee, which are part of the Styrian Salzkammergut. The picturesque landscape with mountains and lakes meant that this area was a holiday destination in the 19th Century. From Bad Aussee it is only a short trip to the Salzkammergut in Upper Austria. 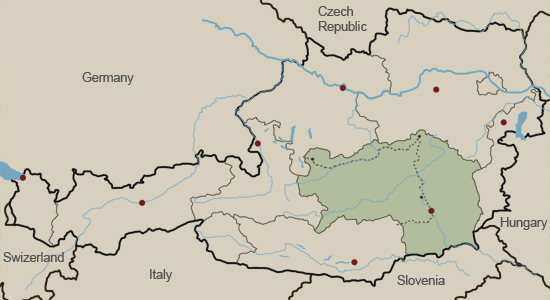 1It has 270,000 inhabitants.2They for instance have one of the world's most important collections of flies.