Austria - a virtual tour: Upper Austria Content from the guide to life, the universe and everything 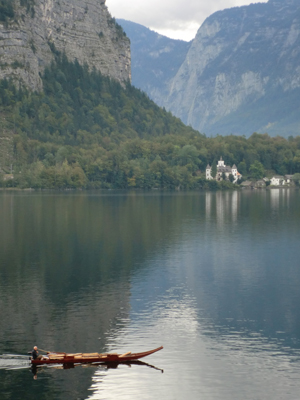 Upper Austria has a border with Germany and the Czech Republic and adjoins the Austrian states of Salzburg, Styria and Lower Austria. Today's borders of Upper Austria are a result of WWI. Before that parts of the state belonged to Bavaria and, in the Middle Ages, a large area was part of Styria.

The Alps lie in the southern part of Upper Austria and it shares its highest mountain, the Dachstein, with Styria. Further to the north the landscape is rather hilly, until it reaches the Danube, which flows west to east from Bavaria to Lower Austria. To the north the terrain gets higher again. The highest temperatures can generally be found in the basin around Linz, while at the same time these lower regions along the Danube get less rain than the mountains in the south.

Dumplings are probably the favourite food of Upper Austrians, often they are filled with meat or fruits. There is also much meat, such as roast pork, smoked pork and sausages with sauerkraut, and many delicious cakes.

Partly squeezed between the neighbouring states Styria and Salzburg and reaching over their borders lies the beautiful Salzkammergut, a landscape of mountains and lakes and a favourite holiday destination since the 19th Century. Even the emperor had a holiday home in the town Bad Ischl, which is still influenced by his presence. His large villa is a museum today. The Salzkammergut and the town Hallstatt in its south are a UNESCO World Heritage Site, also because of its cultural importance since pre-historic times where it gave name to the Hallstatt Culture. The salt which was mined in the mountains was important for the wealth of the area for a long time and old salt mines can still be found.

Austria's biggest forest reserve is the Nationalpark Kalkalpen, east of the Salzkammergut. Spruce, firs and beeches grow next to many other trees and a multitude of flowers, in a landscape of canyons and narrow gorges. 200km of natural streams and rivers are the habitat for uncountable water creatures, and the forest is the home of rare animals such as the lynx.

The area between the Styrian Erzberg in the south and the Danube in the north, across Upper Austria, Styria and Lower Austria, is known as 'Eisenwurzen', a region where iron was important since the Middle Ages. Many historic buildings of the iron industry can still be found. One ensemble that is still complete is the former scythe production Schmiedleiten, which is an open-air museum today.

One of the most important towns in the Eisenwurzen area is Steyr. The iron industry has been the main source of income of this town since the Middle Ages. Many buildings are still left from this period, especially the town square and small alleys with steps up the hill which give it a very picturesque look. Steyr was also a centre of the early automobile industry. A museum shows the industrial life both in the past and of today.

The capital of Upper Austria and centre of Austria's iron industry today is Linz, which lies north of Steyr in a basin at the Danube. The industrial district of the steel factory takes up a large part of the city. The city square of Linz is one of the largest squares in Austria; one of its sides is open to the Danube and leads to a bridge, which makes it seem even larger. It is surrounded by historic buildings such as the old city hall with its baroque façade. Across the bridge is the modern Ars Electronica museum for electronic arts, opposite to the contemporary museum of arts. A short way upstream is the museum in the old palace of Linz. Music and theatre festivals take place in Linz every year.

Close to the border to Lower Austria lies the monastery Stift St Florian. The large baroque building has a very rich interior and a large old library. It is also the burial place of the composer Anton Bruckner, who was born not far away, and worked in the monastery for a decade. 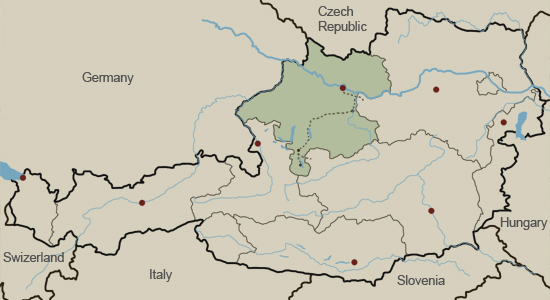