Hallstatt - The Oldest Salt Mine in the World Content from the guide to life, the universe and everything 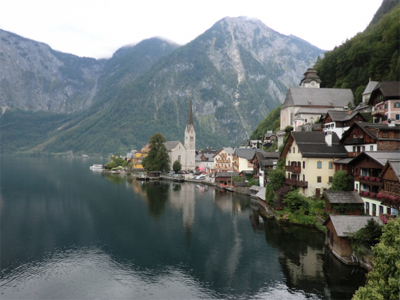 The world's oldest known salt mine, which has been producing salt for 7,000 years, is situated in the mountain high above the village of Hallstatt in the Salzkammergut region of Upper Austria. It is believed that Neolithic man obtained salt from this mine; archaeological artefacts dating back to 5,000 BC have been discovered in the immediate vicinity.

The Hallstatt Salt Mine lies on the mountain a couple of hundred metres in height above the present-day village of Hallstatt. It is accessible by funicular railway1 for the first part of the ascent and then by hiking the last part of the journey.

Local legend tells of a Stone Age hunter who was climbing the mountain in search of deer:

He arrived at the top after tracking animal prints and discovered a spring sputtering out of the earth. Although the hunter was thirsty, he was curious about the numbers of animal tracks surrounding this particular spring. He used all the fingers of both hands to tally the different spoor, but there were many more tracks than he had fingers. The hunter was puzzled by the large number of animals climbing this high up the mountain, because there were many other springs further down in the valley. He tasted the water, but spat it out immediately, because it tasted so strange. Then the Stone Age hunter also noticed that the plants next to the spring were covered with a sparkling white crust. He had heard tales of salt, that magical white powder which stopped meat from going bad, but had never seen any - he would have needed to trade many, many animal skins to get some. Now here it was. He had discovered a salt mine.

The name of the village of Hallstatt derives from hall, the Celtic word for salt. The Celts were the first to start the lucrative industry of salt mining in about 4,500 BC to obtain this 'white gold'. The village gave its name to the early Iron Age Hallstatt culture which lasted from about 1,500 to 500 BC and spread from Hallstatt throughout Central Europe.

In 1734 the preserved body of a miner was discovered, in the salt deposits. A contemporary record states that the corpse was 'pressed flat and tightly grown into the rock. Clothing and tools were quite strange but well preserved'. This story of the presumed prehistoric 'Man in Salt' is now used as an introduction to the tour of the salt mine.

Johann Georg Ramsauer, the managing director of the salt mine in 1846, discovered a large prehistoric burial site in the vicinity. Due to his careful excavations and recording by drawings and watercolours, he became an early pioneer in the field of archaeology. The necropolis2 contains the graves of over 4,000 people, making it one of the most important burial sites from that period.

Originally, and up until the Middle Ages, the salt was mined as 'rock salt' and was traditionally hewn into the shape of hearts. Later, brine extraction was introduced. Fresh spring water was introduced into the mine, the salt from the rocks dissolved in the water and the salty water (brine) was then removed from the mine. The salt could then be recovered from the brine by evaporating away the water. Originally the removal of the brine from the mine took place using winches and buckets, but later, about 400 years ago, the brine was fed out of the mine via an early form of pipeline, using tens of thousands of hollowed-out tree trunks. This process is called solution mining and in modern times this brine is pumped to the surface and then onwards to Ebensee.

The Tour Through the Mine

Visitors start their tour in the village of Hallstatt, from there they are taken up the steep mountainside by the cable cars of the funicular railway and brought to the plateau where the mining community used to live. There then follows a walk of about 15 minutes along a pleasant footpath further up the mountain until the miners' refuge is reached. Hiking or walking shoes are strongly recommended for all visitors to the salt mine.

Before the tour through the mine can start, each visitor must don protective clothing at the miners' refuge which now serves as the visitor centre. After the tourists are dressed in hard hats and overalls, they are welcomed by their guide with salt, bread and schnapps, which is a traditional way of greeting newcomers and visitors.

The tour through the mine itself starts by walking into the mouth of the Christina Tunnel which is 928 metres above sea level. The air smells salty and is always a constant cool temperature of 8°C, even in summer. The constant temperature is due to the geothermal gradient of this underground system. After a short walk a seating area, furnished with wooden benches, is reached. A film presentation gives an informative overview of how the salt was formed in the mountain3, how it is mined and also which present-day industries continue to use the salt from the Hallstatt salt mine.

There are 12 levels of tunnels in the salt mine, known as 'horizons'. In the past the miners used wooden slides to go down to the lower levels and wooden ladders to climb up again; there were no lifts in times gone by. Nowadays tour visitors are restricted to two levels only, levels six and seven.

The visitor first watches a demonstration of how to ride on a slide and then walks to a large chamber of salt crystals. Next is the slide itself: at 64 metres, this is Europe's longest wooden slide, and is for adults and children alike. As part of the attraction, the top speed of each visitor using the slide is measured while a photograph is taken. The photographs are available for sale once the tour has been completed. The slide is optional — if you feel you're not up to it, don't worry; there is a 'comfortable staircase'.

The incredible salt lake in the impressive 'Hörnerwerk' cavern is next on the itinerary. This is where the brine is collected, before being pumped out of the mine. Insoluble impurities from the saliferous4 rocks settle to the lake floor. In summer there are concerts in this cavern which are definitely worth a visit due to the unique setting and the natural acoustics.

While walking through the mine the guide provides the visitors with a commentary explaining how mining was undertaken in the beginning when the Celts dug out the salt with handmade tools. In modern times, production has been mechanised although miners are still needed underground. The tour continues through an exhibition gallery which presents the history of the mine together with a collection of interesting historical objects.

The 'Grubenhund', which is the name of the salt mine's train, returns the visitors outside once again to the entrance of the Christina Tunnel. The ride on the train is exciting, because this is the way in which the miners traditionally left and in fact still leave the mine today. Hands and feet should be kept close to your body, for safety reasons.

Why You Should Visit the Salt Mine

Visiting the salt mine is a unique experience for adults and children alike. It offers the visitors an insight into the history of the 'Salzkammergut' and the importance that salt had and still retains for the region and its inhabitants. Upon reaching the salt mountain there is a panoramic view waiting: the village of Hallstatt, the lake and the surrounding mountains. The guided tour through the salt mine is an adventure that you will remember for many years to come.

1A railway up the side of a mountain pulled by a moving cable and having counterbalancing ascending and descending cars.2A necropolis is a very large cemetery, literally a 'city of the dead'.3It came from the sea originally.4Salt-bearing.