Austria - a virtual tour: Salzburg Content from the guide to life, the universe and everything 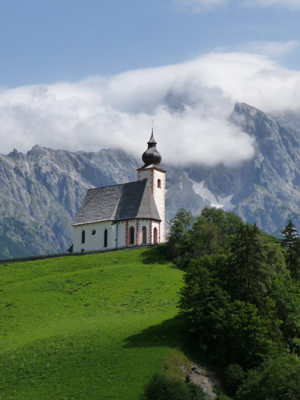 While Salzburg's longest border touches Germany it also has a small tip reaching Italy, where it parts North and East Tyrol. In the east it is connected with the federal states Upper Austria, Styria and Carinthia. For a long time Salzburg belonged to Bavaria until it became part of Austria at the beginning of the 19th Century. The name Salzburg (salz = salt; Burg = castle) originates in the salt mines which brought wealth to the area since the iron age.

The northern parts of Salzburg lie in the foothills of the Alps and have very wet weather. Around the city of Salzburg there is a large, flat basin encircled by mountains. The southern parts have high mountains and a rather dry climate with cold winters and hot summers. The largest river in Salzburg is the Salzach, which comes from the Hohe Tauern mountains in the south, runs through Salzburg in the north and then shapes the border to Bavaria until it joins the Inn.

Salzburg city has far more elaborate cuisine than the country. Its most famous dish is certainly Salzburger Nockerl, a soufflé made from eggs, flour and sugar. In the country the farmers always ate and produced lots of cheese from both cows and goats and also quite a large amount of beer, which is also used for many recipes.

The city of Salzburg lies very close to the Bavarian border. The historic city centre is a Unesco Cultural Heritage and its buildings from various centuries attract many tourists every year. On a steep hill, above the municipality stands the huge castle Hohensalzburg, built as the seat of the archbishop 900 years ago. Tourists also like to visit the house where Mozart was born. Other things to see are the baroque palace Mirabell and its historic gardens and the palace Hellbrunn, which is fun to visit especially in summer because its garden hides many wet surprises. Salzburg is also a centre of arts and theatre and since the early 20th Century there is an important festival with music, operas and plays every summer. American tourists often come to Salzburg for the 'Sound of Music tour', which brings them to the most important locations of a movie which is almost completely unknown in Austria. Salzburg's largest museum is the Haus der Natur ('House of Nature'), which is an impressive exhibition, especially for children.

The open-air museum Großgmain shows historic farms and related buildings, giving a cross section of life from the 16th to the early 20th Century. The 100 buildings which mostly consist of wood come from all over Salzburg and have been rebuilt in the museum. Instead of walking, visitors can also take a historic train which travels through the whole area.

Hallein1, a town south of Salzburg, has been a known source of salt since the Stone Age. The last salt mine was closed in the 1980s and today one of them is accessible for tourists. Visitors are brought into the mountain with a small railway and use the slides down into the mountain that were once used by the miners. The town centre of Hallein has many historic buildings from the last 750 years. The Celtic museum shows mostly finds from the Celtic era of Hallein, which due to the salt was a rich settlement at that time. Another small museum is located in the house of Franz Xaver Gruber, the composer of the Christmas song 'Silent Night', who lived there in the 19th Century.

In about the centre of Salzburg, at the town Werfen, lies the world's largest ice cave, the Eisriesenwelt, with an overall size of 42km. Due to the special climate in the cave ice does not melt completely even in summer, and huge icicles and other ice formations are created through water coming in from above, especially melting water in spring. Another interesting sight in Werfen is the 900-year-old castle Hohenwerfen. Next to the medieval castle itself there is a falconry museum and a show with living birds of prey.

One of the biggest tourist attractions of Salzburg are the waterfalls in Krimml, close to the Italian border. In three steps the waterfalls down all in all over 380 meters, the highest step being 140 meters.

Those who search for the most picturesque way from Salzburg to Carinthia take Großglockner Hochalpenstraße, the street over the highest mountain of Austria in the Hohe Tauern mountain range. The street does not cross its highest peak of 3,798 meters but you can reach the largest glacier of Austria, the Pasterze. On the way over the winding street a difference in high of 1,500 meters is reached and a maximum high of 2,500 meters above sea level. The street was built in the 1930s, but people have known the route over the mountains at this place ever since. Those who think driving by car is too easy can also take their bike. 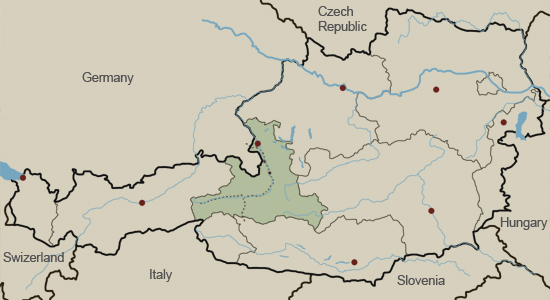 1The 'hall' in many place names in that area has Celtic origins and means 'salt'.