Austria - a virtual tour: Vorarlberg Content from the guide to life, the universe and everything 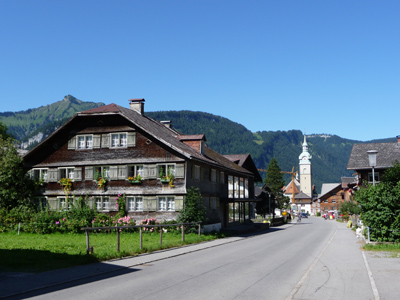 Vorarlberg is the most western federal state of Austria and is separated from the rest of the country by mountains. Culture and language have been more influenced by its neighbouring regions of Switzerland and Germany than by the other Austrian states which makes Vorarlberg a little bit different from the rest. Many inhabitants even work in the neighbouring countries. The third country bordering Vorarlberg is Liechtenstein.

The landscape of Vorarlberg is defined by valleys, rivers and mountains. Many mountains in eastern Vorarlberg are over 3000 meters high with glaciers on the top, while the area around Lake Constance in the east is less than 400m high. In winter the climate is rather mild with lots of snow while the summers are cool. The mountains of Vorarlberg have many popular skiing resorts. Vorarlberg is also known for its contemporary architecture which harmonizes with the traditional architecture of the area as well as the landscape.

Cheese is the most important food produced in Vorarlberg. It is made by many farmers in the alps where their cattle spends the summer. Spätzle are made, accompanied by the local cheese. There is also a lot of fish from Lake Constance.

In the east of Vorarlberg lies its capital Bregenz, at the shores of Bodensee (Lake Constance), which Austria shares with Switzerland and Germany. Bregenz is known mostly for its modern art museums, theatres and opera houses. The stage on the lake on which operas are shown each summer is the largest of its kind in the world. Additionally the town has many historic buildings and churches and an evening walk on the lake promenade should not be missed.

Dornbirn is the largest city of Vorarlberg and its industrial center - for a long time the textile industry was an important part of the local economy. One of the old factories has been adapted to the most important museum of natural history in Vorarlberg: the inatura. The museum has its roots in the 19th Century but is today an exciting, interactive museum with a focus on the nature of Vorarlberg.

South of Bregenz lies Feldkirch, the most western town of Austria. The old town has many historic buildings like the Gothic cathedral and above all the medieval castle Schattenburg. The castle was built in about the year 1200 and is still preserved very well. Today the castle is a museum with a large collection of historic weapons.

In the center of Vorarlberg lies the Großes Walsertal. The deep narrow valley is mostly used for grazing cattle. A great variety of flowers grow on these meadows and alps. The natural and man-made landscape of the valley as well as the local culture and customs are recognized by the UNESCO and resulted in the Walsertal becoming a Biosphere Reserve.

Only high passes connect Vorarlberg with the federal state Tyrol in the east. The Arlberg has been the most important way over the mountains for a very long time. Today a tunnel enables travelling at all times of the year. On the other hand one of the most beautiful ways to cross the mountains is still the Silvretta Hochalpenstraße, a road with many serpentine bends that reaches over the mountain range of the Silvretta and reaches over 2,000 meters at its highest point. 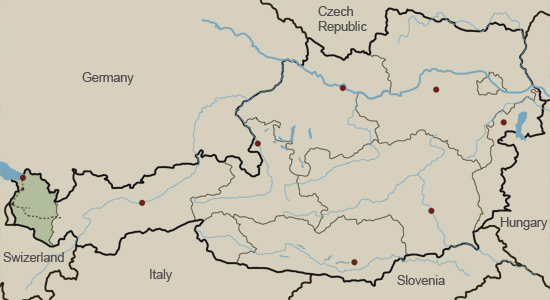