Onions Content from the guide to life, the universe and everything 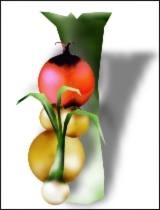 The humble onion, Allium cepa, has been a staple part of diets in all periods of history and nearly all nations1 of the world. Ancient Greek athletes consumed them for fortification; Pliny the Elder - the well-known Roman observer and documenter - prescribed onions as a cure for toothache and dysentery; the Pilgrim travellers took onions with them to the New World, but found wild onions to be ubiquitous and widely consumed; Elizabethans used onions to clean and strengthen the teeth. This vegetable has become renowned worldwide for bad breath and indigestion, but is included in the vast majority of dishes. It certainly helps to know one's onions2...

Originally a wild plant, the onion developed its raw, bitter flavour through a chemical known as allicin (taken from the Latin allyl meaning garlic, as garlic has the same compound). The plant itself consists of an underground bulb with short roots, and long, thin leaves above ground; early civilisations found the leaves to have a much milder flavour than the bulbs. The stem running down the centre of the bulbs was thus discovered to be the nerve centre of the onion plant. This stem is remarkably tenacious and profligate - store an onion bulb in a cool place and the stem will start to sprout of its own accord within a couple of months. Unlike a sprouting potato, the sprouts will appear green and healthy - this versatility is no doubt the reason why wild onions became so widespread in the first place.

Commercial onions are grown from seed. Various species of onions can withstand the full range of temperatures in a temperate climate, and so commercial farmers can grow them almost year-round on a rotation system. Domestic onions tend to be grown from sets: partially grown bulbs that can be planted under the top layer of soil. Sets are particularly sensitive to acidic soil; it is wise to lime3 your soil, to make it alkaline, before growing onion sets. The sets are generally best when planted in early Spring (March in the UK) for a Summer harvest; under cover, they can be planted even earlier, and it may be possible to cultivate two crops in a year.

Once harvested, onions can be stored for up to a month in a dark but airy environment. The traditional string bag is ideal but, if you can't get hold of one, some paper bags in a cupboard will be quite sufficient.

Onions have traditionally been good sources both of dietary fibre and potassium, but are low in calories. Raw onions have been proven to lower cholesterol levels. As well as being the principle flavour, allicin is also a powerful antibiotic that can avert food poisoning and gastritis. More recently, it has been discovered that onions are rich in a flavonoid compound called quercetin, which helps to guard the body against some long-term diseases, including cancer.

The most common use of onions is to act as an aromatic: fried until soft at the beginning of a curry, stew, stir-fry, casserole, pasta sauce or anything similar, they lend the pan a piquant sweetness, which then spreads throughout the dish. The degree of frying is critical; if onions are fried until they brown, the natural sugars in them will caramelise and lend a sweeter flavour, as well as helping naturally to darken the sauce. Onions fried until they soften (without browning) will pass on a stronger flavour, more characteristic of the onion.

Of course the uses need not stop there. A few rings of onion placed on top of a baked dish give it a little more variety and flavour; finely-chopped raw onions work well in tomato salads and mashed potato, as well as in cheese sandwiches; and whole baby onions are delicious roasted as an accompaniment to a traditional Sunday lunch. Onion soup is virtually a national dish in France, and sage and onion stuffing adds moisture and flavour to roast chicken or turkey.

Assuming you are using a common-or-garden white onion, the first step is to slice off the shoot at the top (don't forget this is the most bitter part) and the roots at the bottom with a sharp knife. The papery skin can then be removed by hand.

Dishes that call for coarsely-chopped onions include curries or stews, where the intention is to caramelise the large onion pieces to spread sweetness and colour to the dish. Chopping onions coarsely provides the amateur chef with little trouble - the onion is a layered vegetable and will naturally fall apart into large segments with only a few strokes of the knife.

More tricky are the dishes that call for finely-chopped onion. These are often more delicate sauces that would be spoiled somewhat by having large lumps of partially-cooked onion floating in them: don't forget that evenly cut pieces will also cook evenly. This is the best method for finely-chopping onions without having to resort to slash-and-hope methods:

This method takes plenty of practice (and minimises the pain - see below), but is worth it for the improved consistency of cooking that will result. Beginners could cut the onion in half, base to stalk, before using this method on each half.

Perhaps the most infamous trait of onions is the fact that they make you cry when chopping them. Onions naturally contain a quantity of sulphur that, when the chopping process interferes with the chemical make-up of the constituent cells, forms a compound known as propanthial S-oxide, which is released as a gas. This gas reacts chemically with the moisture naturally present on your eyeball to form weak sulphuric acid. This irritates the eye and hence stimulates the tear ducts.

As an aside, sulphur compounds are also responsible for some pretty grotty smells (most notably, hydrogen sulphide is the 'rotten eggs' smell), and many people find them intolerable. This could explain the high percentage of people who dislike raw onions but will happily eat them cooked, after further chemical reactions will have removed any noxious gases.

There are many suggestions on how to avoid crying when chopping onions; one that is not recommended is putting the onion in the fridge or freezer before chopping. Onion cells, like all living cells, are 80% water. If that water freezes, it will damage the cell and hence impair the flavour of the onion.

A better suggestion for avoiding weeping eyes is to wear a pair of swimming goggles, so the damaging gas cannot come into contact with your eyeball. If this is too much trouble, then run some cold water over your wrists. This way, the gas will react with the water on your hands, and the resulting acid will disperse naturally5, with very little getting close to your eyes. A pan of boiling water nearby will have a similar effect.

Other remedies include wiping your chopping board with spirit vinegar (for cooked dishes, when the vinegar will evaporate; not advisable for raw onions), or placing a slice of bread between the teeth. One suggestion is to have a lighted candle nearby, but this Entry does not endorse naked flames in the kitchen, where a candle could easily be knocked over.

The dreaded onion breath gets us all at one time or another. Minty chewing gum will disguise the odour rather than killing it completely, and the best remedy is thought to be fresh parsley. Parsley is very high in chlorophyll, the chemical that traps sunlight for photosynthesis in plants. The chemical reaction that allows chlorophyll effectively to neutralise onion breath is the same one that makes green onion leaves less pungent than the bulb.

Many carefully-bred varieties of the humble Spanish or Japanese onion (the two most common species) have been carefully cultivated for varying levels of acidity or sweetness - but the differences between them would interest few but the hardcore gardener. Instead, we focus here on the more strikingly different members of the family:

These are onions grown from seed and are picked very early when the leaves are developing but the bulb is not yet grown. Their flavour is almost sweet, making them delicious in salads. The great soul keyboardist, Booker T, must have liked them - one of his most famous pieces of music is called Green Onions.

Called 'scallions' in the USA, these are becoming an increasingly popular variety. So called because they were harvested early in spring, spring onions have an underdeveloped bulb with no papery skin, and delicious green leaves. They require very little cooking and are frequently used in stir-fries and similar oriental cooking.

Two further early-harvested varieties, they actually differ quite dramatically. Shallots have been cross-bred to remove some of their allicin, and hence have a very sweet flavour that makes them ideal for delicately-flavoured dishes and salad dressings. They are actually an immature version of the red onion (see below).

Baby onions have a stronger, acrid flavour and are commonly used for pickling. Like many immature vegetables, they pack all the punch of the full-size vegetable into a smaller package!

Originally native to North America, the red onion has become much loved by cuisines the world over for its more subtle flavour. The red onion requires less cooking than its white cousin. Indeed, it is perfectly acceptable served raw and is delicious in salads. The colour derives from chemicals called anthocyanins, which are chemical indicators of acidity - if you want your red onions to remain red, make sure they are served in a dish with vinegar or lemon juice.

Last but not least, the leek resembles an overgrown spring onion and is a slightly more distant relative of the onion. It actually becomes quite distasteful if fried, so is used for adding flavour to soups6 and stews. The leek has not yet gained wide popularity outside Western Europe, which is mystifying as it is easy to grow and cook with. It is, of course, the national symbol of Wales.

1The biggest onion-eating nation is Libya. The average Libyan eats a staggering 67 pounds of onions a year - about a whole onion every day!2The precise origin of this phrase is unknown, but is thought to derive from a more generic phrase: 'know one's potatoes', 'know one's cabbages' and so on. The 'onions' one was just the particular phrase that stuck.3Slaked lime is calcium oxide, produced industrially to make cement. It is quite strongly alkaline.4Try to avoid wooden boards for chopping onions if you can; they tend to absorb some of the odour.5Although the acid will irritate your eyeball, it is not strong enough to affect human skin.6Most notably, the French vichyssoise, a leek and potato soup.