Cross-country Skiing Content from the guide to life, the universe and everything 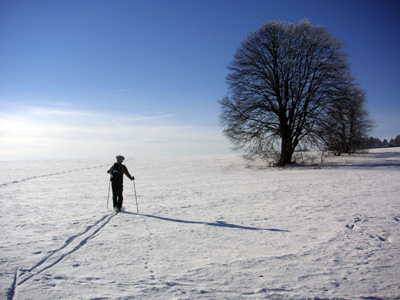 The oldest preserved skiing picture is to be found in Alta, Norway. This rock carving shows a man with two sticks attached to his feet, and is supposed to be 5,000-6,000 years old. Skis of approximately the same age have been recovered from swamps in Finland.

The shape and size of these historic skis varied due to local conditions: soft snow required longer and/or wider skis for better float; in thick forests and on sloping terrains skis needed to be shorter for easier turning.

A common version of skiing equipment consisted of one short - and one longer - ski, together with a single pole. In Finland, the short ski was called a lyly, whereas in Norway it was known as the andor. The long ski was called a kalhu. The lyly had sealskin attached to the base; it was used for kicking up more speed. Long skis were designed for gliding.

Skis were used simply as a means of transportation - getting from A to B was simply so much easier with skis than without. In this sense, skiing shares its ancestry with horseback riding; both have transformed from a necessity into a hobby.

Nowadays, the same equipment is used all over the world. It consists of two skis, two bindings, two poles and two ski boots.

Skis are usually about the same height as the skier. This varies slightly depending on the technique used (classic style uses longer skis, skating slightly shorter) and also due to personal preferences. The width of the ski is just over four centimetres and it doesn't have metal edges1. Materials vary quite a lot: expensive race skis feature carbon fibre and other hi-tech constructions, while less expensive models are made out of wood and basic plastics. Nowadays there are neither specifically left- nor right-footed skis, as the structures are symmetrical. In comparison, the old 75-millimetre bindings (used until the 1980s) were asymmetrical.

Bindings are used to connect skis to the skier's feet. Unlike alpine bindings, only the toe end of the ski boot is attached to the ski, thereby working like a hinge, which can cause painful face-plants2 for people used to the alpine version. Currently there is no regulated standard for the binding mechanism. Differences in systems are minor, but still big enough that you have to buy your boots and bindings from the same maker.

Ski boots resemble roller skates in general design. The sole of the boot is quite stiff, but still has some flex left. A ski boot designed for skating technique is stiffer overall, and has a higher leg than a model designed for classical style.

The pole length is normally 10-40 centimetres less than the skier's height. This also varies according to the technique used (skating techniques require a longer pole) and personal preferences. Normal materials for the pole are glass fibre or carbon fibre.

There are still some people who do at least part of their cross-country skiing away from a created track. Reasons for this include, but are not limited to: going hunting or fishing; looking for peace and quiet; patrolling remote borders; and just for the fun of it.

Untracked snow requires a few alterations to equipment. Skis are usually much longer; they can be up to three metres in length if used in open and flat terrain. The ski is also broader - in the region of ten centimetres width. The leg of the ski boot has to be higher to prevent soft snow from getting in it. Also, the basket of the pole is made bigger; this is to prevent it from sinking too deep into soft snow. Metal edges are used in skis that are meant for hard snow and/or mountain conditions; the cross-country ski with metal edges approaches the design of a telemark ski, and the border between these two is hard to draw.

In classic technique, the skis stay parallel underneath the skier and kicks are directed straight back. At this point, the common question is 'But how can you kick back? Won't the ski just glide backwards?'. The answer is that it shouldn't but often does, due to the wrong choice of kick wax. Kick wax is applied into the middle of the ski just under the binding area. Remembering that all skis are slightly arched, pushing down on only one ski flattens the arch completely, so that the kick wax comes into contact with the snow, creating friction, and pushing you forwards. The choice of correct kick wax depends heavily on conditions and the skill of choosing is akin to black magic; therefore it should be left to the shamans at the ski shop.

Poles can be used either alternately or simultaneously. If used alternately, it is recommended to push against the one opposite to your kicking leg. The use of hands and legs together efficiently is practically impossible to explain in text. People in Nordic countries are born with this knowledge - everyone else just has to go out and make an idiot of themselves while trying to figure it out.

Skating evolved as a separate technique in the 1980s. The method is very close to skating on ice- or roller-skates. The only additional things to bear in mind are the two poles that you can push against to build up more speed. Each kick is directed diagonally back and simultaneously the weight is moved on to the other ski to start gliding. Both poles are used simultaneously on every other kick; however, you can use poles at every kick, if you have a very long kick, excellent technique or very fast hands.

Cross-Country as a Competitive Sport

Cross-country skiing has been an Olympic sport since the origins of the Winter Games in Chamonix in 1924. World championships are also held every other year. The normal race distances for ladies are over 5, 15 and 30 kilometres. Men race over distances of 10, 15, 30 and 50 kilometres.

Sprint-type competitions were introduced in the 1990s over race distances less than two kilometres. In sprints, four skiers compete at the same time, the two fastest ones will get to the next round, in knockout format.

The other important part of cross-country skiing is mass races. These are normally held on courses between sixty and ninety kilometres long. The biggest ones, such as Finlandia-race in Finland and Wasaloppet in Sweden draw thousands of racers together. Some take it as a race; most as a major happening in their lifetimes.

Norwegian history of skiing etcFinnish view of skiing
1Unlike the off-track ski.2The entertaining phenomenon of travelling face-first into the snow.