Asparagus Content from the guide to life, the universe and everything 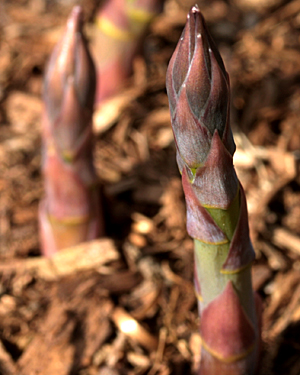 Asparagus officinalis has been one of the world's most desirable vegetables for over 2,000 years. Ancient Romans believed asparagus grew from rams' horns buried in the ground, and it was long considered to be an aphrodisiac because of the shape of the spears. Asparagus season is especially celebrated in Germany, with most restaurants offering a dedicated Spargelkarte (asparagus menu) from April to June each year.

This vegetable is a good source of vitamins and minerals including beta carotene, vitamin E, and potassium1. Asparagus also contains a large amount of glutathione compared to many other vegetables. Glutathione is an antioxidant, so asparagus may help protect against cancer and other diseases. Asparagus is a diuretic and has been used medicinally to treat rheumatism, gout, kidney problems and cystitis.

There are many varieties of asparagus. Most produce green stems, but some yield darker stems that are almost purple2. The stems can be blanched by burying the plants under a mound of soil. This deprives them of light and produces white spears.

Asparagus is an expensive vegetable because it is not very easy to grow and its harvesting season is fairly short. A considerable amount of preparation is required before an asparagus bed is established, and the plants must be carefully nurtured. On the positive side, if conditions are right, you can expect a decent crop of asparagus spears for up to 20 years.

In order to grow asparagus from seed, you should start in January. Soak the seeds in a dish of water for two days. Sow them into seed trays or individual cells of a planting tray and keep them at 13-16°C in a greenhouse. Pot them up when they are large enough to handle, harden them off3 and then in summer plant them into a temporary position in a sheltered, sunny site with good drainage.

You can skip this step and save a year's work by buying asparagus crowns. The roots of crowns need careful handling and should not be allowed to dry out before being planted in the ground.

For both crowns and one-year-old plants grown from seed, the permanent home for your asparagus needs to be well prepared.

In the autumn, thoroughly check the area and remove all weeds, then dig in some well-rotted manure. If the bed contains acid soil, also add some garden lime (calcium carbonate).

The following spring, around ten days before the crowns are to be transplanted, rake in some general purpose fertiliser. On the day of planting out, dig a trench 20cm (8in) deep and 30cm (12in) from front to back. The plants will be spaced 30-45cm (12-18in) apart, so the trench should be as long as necessary to accommodate all the plants you plan to grow.

Using the soil that was dug out, build a ridge 7-10cm (3-4in) high in the base of the trench. Place the crowns on the top of the ridge and spread the roots down the sides, then cover the plants with 5cm (2in) of sifted soil. As stems grow through the soil, keep covering the plants with more soil - the trench should be filled in completely by autumn.

Each year, protect the plants from frost in winter by covering them with fleece, hessian or cloches. Apply a dressing of general purpose fertilizer in spring. In summer, regularly weed the bed by hand or very carefully with a hoe, making sure not to damage the crowns, and water the plants in dry weather. Each autumn, cut the foliage down to 3-5cm (1-2in) above the ground when it turns yellow.

No spears should be harvested in the plants' first season in the permanent bed, or in the following year, to ensure that the asparagus becomes well established and builds up a good reserve of nutrients.

Asparagus plants are either male or female. Both will produce edible spears, but the females give a smaller yield as they also produce poisonous berries. Many growers select only male plants for their asparagus bed, but if you do keep female ones, make sure to remove the berries before they fall on the soil.

From the third year after the plants were placed in their permanent home, asparagus spears can be harvested. Select stems that are 10-15cm (4-6in) long and, using an asparagus knife or any other long, sharp knife, cut at an angle 5-7cm (2-3in) below the surface of the soil.

Harvesting must cease in mid June4 to allow the spears to develop into ferny leaves to generate good growth ready for the following year. A general purpose fertiliser should be applied at this stage to help build up the plants.

Slugs are a pest for many vegetables, including asparagus, but there are three main things to look out for that are specific to this plant.

If a plant develops spindly spears (3mm or 1/8in diameter at the base), it is probably because of over-harvesting the previous year, or insufficient feeding. Do not harvest any spears, but do apply a general fertiliser in mid June as usual, and your crop the following year should be as delicious as you expect.

You will generally want to eat your freshly-cut asparagus spears straight away, but should you want to save them for another day, cut stems can be stored in the fridge for up to three days.

Spears can also be frozen for use in cooked dishes at a later date. Clean them thoroughly and tie into a bundle with soft string or raffia (tie two bands - one below the base of the (darker green) tips, and the other just above the cut ends of the stems). Submerge them in a pan of boiling water up to the highest band and cook for 2-4 minutes, depending on how thick the stems are8. Lay the bundle in a rigid plastic container and then place it in the freezer.

For maximum flavour, eat asparagus spears within an hour of cutting them. They can be eaten raw, perhaps with a dash of oil or vinegar, but they are more often cooked first.

A popular cooking method is to tie the spears into a bundle in the same way as if you were going to freeze them, but boil them for 10-15 minutes. They can also be steamed for 8-10 minutes9. Adjust the timings as necessary so that the stems are tender but do not bend when held upright. Simply serve them on their own with a knob of butter or a drizzle of Hollandaise sauce.

There are also many recipes that have asparagus as an ingredient, including soup, risotto and stir-fry.

My favourite way to prepare it is to fry chopped-up green asparagus in a little butter with flaked almonds.
– H2G2 Researcher

Asparagus is infamous for causing some people's urine to smell distinctively pungent after they have eaten a meal containing this vegetable, but it is also true that not everyone is able to detect the odour. It is estimated that around 40% of the population do not break down the smell-causing asparagusic acid after eating asparagus, but only about 20% of the population can smell it. Whatever the effect on you, the results are totally harmless.

1It has 200mg of potassium per 100g so six spears would contain about as much as half a banana.2These are rich in anthocyanin pigments, which are also antioxidants, and so may be better for you than their paler counterparts.3The plants' resistance to cold and wind is improved by gradually increasing the amount of time they spend outside.4No matter how much you are tempted to squeeze another meal out of your plants.5This compound also reduces competition from other plants by inhibiting their growth.6Microscopic parasitic worms.7The diseased site can be used for other crops, but root vegetables should not be planted there for at least three years.8Spears generally range from 5 to 10mm (¼ to ½in) in diameter at the base.9Purple varieties are less likely to lose their colour when steamed rather than boiled.