Slugs Content from the guide to life, the universe and everything 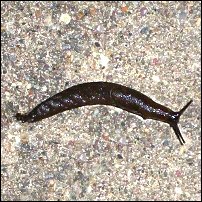 They walk on one foot. They have antennae. They live in water or on land. Some are very colourful; others are just plain black and brown. Their slime creates an electric current. They come out at night to eat, and there are but a few things that can stop these slippery, boneless blobs in their tracks; among them salt and caffeine. This entry is about slugs - not aliens, school dinners or taxi drivers. Just plain ole slugs.

There are land slugs and sea slugs which are very different, although they are obviously related. Both kinds are invertebrates (animals without a backbone). More specifically, they belong to the mollusc phylum1 and even more specifically they are in the gastropod class of animals. Slugs are the only gastropods that lack an external shell, yet some slugs possess an internal shell. Slugs are said to be very closely related to snails; sometimes they are even called snails without shells. Land slugs and sea slugs mostly feed on vegetation, although some slugs eat other animals, including other slugs.

One thing to note about slugs is that they are hermaphrodites, or organisms with both female and male sex organs. In the early part of their lives, slugs are males, and as they grow older they develop the female organs. Slugs do not need a partner to reproduce, yet most slugs use partners to mate. They tend to lay anything from three to around 500 eggs at a time, depending on the species. This is possibly why slugs are such successful organisms. They have a natural life span of between one and six years, again depending on the species.

Because slugs are so successful, they can be found just about anywhere. Of approximately 40 species of land slugs in North America, 30 species are most commonly described as pests by gardeners because of their consumption of vegetation. Slugs only go out at night to eat, making it harder to spot them. During the daytime, slugs can be found in small crevices and in places that are dark and damp. At night when the slugs eat, they can consume several times their own body weight. They need all the food so that they can produce the slimy secretions (mucus) that they move on.

Land slugs are complex creatures for their size. They have eyes, the senses of touch and smell, and an astonishing 27,000 teeth in their mouths. They have four appendages, two of which are for seeing and two for smelling and touching their food. The two larger appendages on top possess the eyes at the tips, and the two smaller ones near the mouth help the ingestion process.

However, the mouth is not used for breathing. Instead there is a hole, called the pneumostome, in the side of the body that takes care of respiration. The bigger antennae, for protective reasons, can pull their eyes into the head when the eyes are touched.

As you might have guessed, slugs do not move at an astonishing speed. In fact, they only move at a meagre 0.025 miles per hour. That's one mile per 1.6 days, assuming they move at a constant rate. It should be noted that most slugs wouldn't attempt to walk one mile because there is no need to, and if a slug did try, it would most likely die.

Slugs are so slow because of their inefficient method of travel. Slugs use one foot to move from place to place, and that one foot glides on mucus that it excretes - the shiny trail snails leave behind is merely dried mucus. In order to produce enough of this slimy substance, slugs have special secretory cells. They can produce enough mucus to enable them to make it over a sharp blade unharmed, though the mucus does react to copper in such a way that it creates a mild electric current.

There are about 2,500 species of sea slugs. Most grow no bigger than two inches long, but some nudibranches can reach lengths of up to two feet. In the early stages of their lives, sea slugs don't look anything like their parents. In fact, they start out with shells, but shortly after birth they lose them.

Most people who have seen them have classified sea slugs as beautiful animals because of their brilliantly-coloured bodies. The colours are used as camouflage for protection against predators, but as the slugs move deeper into the sea, the colours become less intense, making them more visible. That is why most slugs stay near or even on top of the surface of the water for most of their lives.

Nudibranches have been classified as both herbivores and carnivores, depending on the species. Some herbivorous sea slugs spend almost all of their life next to seaweed or beds of algae. For instance, the sargassum sea slug actually lives attached to sargassum seaweed. Carnivorous sea slugs eat mostly small fish, sea anemones, sponges, worms, barnacles, jellyfish, and hydroids.

Hydroids have special stinging cells that sting their predators when they attack, but sea slugs are immune to these stingers. When slugs eat the hydroids, the stinging cells are actually passed into the skin of the slug, so that when a slug's predator attacks the slug, it is stung by the inherited stinging cells of the hydroids. Another thing that sea slugs absorb from the food they eat is the colour. If a slug eats something blue, it turns blue. If it eats something brown, it'll turn brown. This is how sea slugs gain their brilliant camouflage. You are what you eat, right?

Slugs are usually dismissed as garden pests or disgusting, slimy night crawlers. For this reason, people are always trying to find a way to get rid of these 'pests.' But slugs aren't going away no matter what you do, whether it's throwing them into the street or blowing up your back yard2. Statistics show that for every slug killed, 20 more 'roam free.'

So the next time you see a slug, don't waste your time killing it. Just observe it, and let it go on its own slug way.

1A phylum is one of the larger divisions of the animal kingdom.2Which would defeat the object, if you think about it.