Kyselak Was Here - a Graffiti Tagger Leaves His Mark Content from the guide to life, the universe and everything 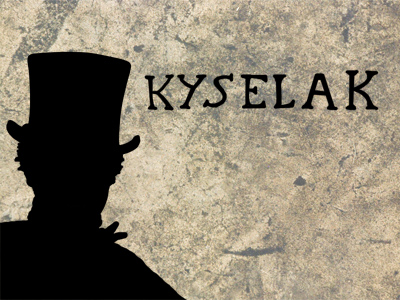 High above the eerie abyss
towers the highest gable peak
and at the edge of the highest wall
shines the name of Kiselak.
– Joseph Victor von Scheffel, in a poem about the ruined castle of Aggstein

Have you ever been angry about graffiti on a building? Have you seen walls of public toilets filled with scribbles? For centuries humans have left their names at important places. Romans and Greeks left messages on the walls of buildings, soldiers painted signatures in conquered places and travellers inscribed important landmarks and sights. One of them was Joseph Kyselak.

Joseph Kyselak was born in December 1799 in Vienna, Austria, the son of a civil servant. In 1816 he started to study Philosophy at the University of Vienna but gave up studying about a year later. Kyselak got a job as trainee in his father's department of the Civil Service. He stayed a trainee until 1825, when he was finally promoted to an assistant. In the same year Kyselak went on an important journey through Austria. After returning to his job he took another lengthy vacation in 1828 and wrote a book about his first journey. Kyselak died in December 1831 due to an outbreak of cholera. He was unmarried and had no children.

How to Become a Legend

On first sight, Kyselak's life seems boring and uneventful and it probably was. How come people still remember him after 200 years? Allegedly it all began with a bet. Kyselak said he would manage to become famous throughout the Austrian Empire within only three years. Whether this is true or not is unclear but he certainly would have won this bet and it is said he won it in less than a year and a half.

TV shows us every day that nobody needs talent to be famous and this was also true at the beginning of the 19th Century. When Kyselak took a four-month vacation in 1825 and travelled on foot through Austria and Bavaria, accompanied by his dog, the most important thing he carried along was black oil paint and a stencil. Wherever he went, he left his name on walls and rocks for everyone to see. Often he climbed to almost unreachable places on cliffs and ruins to write his name.

And soon Kyselak really was known to everyone in Austria1. Various stories have grown around this person and he was even an inspiration for writers and poets. One common story says that after Kyselak wrote his name on public buildings the Emperor summoned him and told him to stop writing his name everywhere. Kyselak ruefully promised what was asked of him. When he had left, the Emperor looked down on his desk to see 'Kyselak' written on it.

Another tale says that when a new bridge was built in Vienna, the site was carefully guarded to prevent Kyselak from reaching the bridge before the inauguration celebrations. Everyone was relieved when the bridge was checked and no inscription found. When a boat passed under the bridge, people looked up to find 'Kyselak' written above their heads.

To this day, many of Kyselak's name tags remain. A project to collect all of Kyselak's inscriptions lists over 200 made during his journey in 1825. Joseph Kyselak still has many impersonators and so new 'Kyselak' tags appear around the world every year. A genuine inscription can for instance be found on an obelisk in the Schwarzenbergpark in Vienna.

Kyselak's book 'Skizzen einer Fußreise durch Österreich'2, first published in 1829, is still available and gives us an impression of landscape, people and buildings at the beginning of the 19th Century. He critically describes new developments and the destruction of nature and landscapes by industrialisation, which makes his work valuable for historians.

A TV documentary about Kyselak called Kyselak war da – Graffiti anno 18253 was made in 2007. It is based on Kyselak's travel report.

1Although they didn't all know how to spell it, as the poem at the start of the Entry proves.2Sketches of a Journey on Foot Through Austria.3English title: 'Kyselak, the first graffiti tagger'.