Vegetables Content from the guide to life, the universe and everything 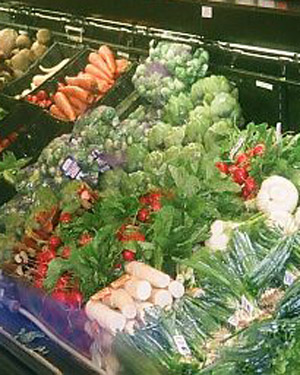 How to eat spinach like a child: Divide into piles. Rearrange piles. After five or six maneuvers, sit back and say you are full.
- Delia Ephron 1983

The word vegetable can simply mean 'plant', as in 'animal, vegetable or mineral', but what we're talking about here is plants as food items. Vegetables - or 'veggies' as they are sometimes called - increase fibre in the diet, are free of cholesterol and are full of minerals and essential vitamins. However, sometimes people would rather just have the meat and potatoes and forget about the green stuff. Well, here's a newsflash: veggies are more than just green stuff, and sometimes they even taste really good.

In one group of vegetables such as carrots or radishes, we may eat the root. In another like celery and asparagus, we eat the stems. In the main group where we find lettuce or spinach, we eat the leaves. And in cases like squash or tomatoes, what we are eating is the fruit of the vegetable. Added to this, there is a whole subcategory called legumes, including beans and peas, which are grown for their edible seeds.

Some Things That Are Not Vegetables

Many people will pay a high price for truffles. There are festivals devoted to the morel mushroom. But this does not make them, or any other mushroom, a vegetable. Technically, fungi are not even plants, because they are unable to create their own food from sunlight. People have been accidentally poisoned by eating the wrong fungi.

Just because a poinsettia looks pretty appetising, this does not mean you should eat one. This also applies to many other flowers or plants used for decoration, as they may very easily be poisonous.

Gold leaf may not do you any harm, being made out of actual gold, which is inert; the 'leaf' in this phrase has nothing to do with plant matter.

While there are stories of people being saved from dehydration in the desert by eating cacti, this in no way makes them a vegetable. Although you can eat the fruit of one cactus - the prickly pear.

1Gherkins are a type of miniature cucumber specially grown for pickling purposes.2Eat the Seasons - Leeks.3Washington State University.4This strain was developed in Australia.5It is possible to grow potatoes from seed but that is not the primary way potatoes are grown.6Seed potatoes are not seeds, they are small potatoes specially produced to be planted, rather than eaten. They are usually disease-free, and so cost more than potatoes bought from the supermarket.7The eye is the bud where the new stem starts. Seed potatoes are planted with the eyes looking upwards.