The Radish Content from the guide to life, the universe and everything 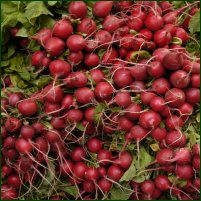 The radish is a vegetable that is part of the Brassicaceae family, which also includes things like cabbage, broccoli and kale. As with the other members of the family, the leaves of the plant are edible but these are mainly grown for their taproot. This edible root comes in a number of different colours and sizes but perhaps the most familiar is Raphanus sativus; a round, red-skinned variety, roughly three centimetres in diameter, which is often seen brightening up a salad. The juicy white flesh has a crisp texture and the vegetable has a slightly peppery taste which is concentrated in the skin.

The plant is native to parts of Asia, first found in China and Japan, and was cultivated in Egypt for thousands of years. They were widely grown around the Mediterranean, particularly in Greece where they were much sought-after, but they don't seem to have reached British shores until the 16th Century.

The different varieties can be distinguished according to the shape and size of the swollen part of the root; large or small, round, oval, oblong, and long and tapering can all be found. Similarly they can be found in a number of different shades; bright red through to pinks and magentas, white, black and yellow types are all grown. The most commonly-grown black radishes are either turnip-shaped or tapered and can be up to 20cm long. They are much stronger in flavour than the red ones. A popular white variety is the white icicle, which, as the name suggests, is tapered in shape and around 15cm long. They are very delicately flavoured. The daikon is a giant white radish native to Asia; they are very large carrotshaped vegetables that can reach 45cm long and weigh up to one or two pounds.

Radishes are a popular choice for vegetable growers in the UK as they are fairly easy to cultivate and reach an edible state relatively quickly. Many varieties reach maturity in a month or less, so are satisfying for new gardeners who want the encouragement of eating the fruits of their labour as soon as possible.

They are pretty undemanding plants, requiring moderately moist, moderately fertile, neutral to acidic soil and a reasonable amount of sunshine. The small varieties don't need lots of room so can even be grown in containers in the smallest of city yards.

To prepare the area in which the radishes will grow, the soil needs to be loosened so that the roots are able to swell. The seeds can be planted out directly where they will grow, about 1cm deep, from early spring right through to mid-summer. It is a good idea to plant a small number of seeds each week for several weeks through the growing season in order to get a succession of plants ripening at different times. If you are a little pushed for space in your vegetable bed or allotment, they can be planted in between slower-growing vegetables such as carrots, as they will be harvested long before the other vegetables need the space. Once harvested, the radish tops should be removed, as they will last longer this way.

Things to do with a Radish

Well, obviously you can eat them. Along with the other members of this plant family they contain compounds which are thought to be protective against cancer, and as they are very low in calories they are a good snack for those watching their waistlines. The most common way of consuming the radish is as part of a salad, where the red varieties can add colour and a bit of bite. The swollen root should be topped and tailed, the skin washed and then it can either be served whole or be chopped or sliced in whatever ever manner takes your fancy. As they are firm-fleshed they stand up quite well to decorative carving, so are popular as a garnish. Most of the peppery flavour is stored in the skin so for the stronger-flavoured black radishes you might like to peel off the skin first, however, this is probably not necessary for the milder red and white varieties.

It is less common to cook radishes, but worth a try. Boiling them can lessen the peppery flavour so may be a good choice for the black and daikon varieties. All varieties can be chopped and added to stir-fries. Steaming red radishes will turn the flesh a pinkish colour so they can make an attractive warm garnish.