Carnuntum - Roman City in Austria Content from the guide to life, the universe and everything 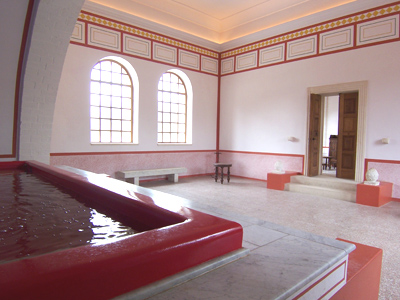 About half an hour east of present day Vienna lies the capital of the former Roman province of Upper Pannonia. On an area of approximately 10 square kilometres the remains of a vast Roman settlement are hidden in the ground. Visitors can gain rare insight into the everyday life of the Roman population.

Carnuntum is situated about half way between Vienna and Bratislava, in the Austrian state Lower Austria. It lies right next to the Danube, at the opposite shore of the Donau-Auen National Park – the last major wetlands environment of Central Europe. The archaeological site belongs to today's municipalities of Petronell-Carnuntum and Bad Deutsch-Altenburg.

Carnuntum was situated at the southern shores of the Danube at a crossing of the road running along the limes – the northern fortified border of the Roman Empire - and a major trading route leading south. It was a strategically important location for the defence of the empire against the Germanic tribes in the north. In the early 1st Century AD a temporary camp was installed, later a wooden fortress with palisades, bank and ditch was erected. It was rebuilt in stone at about 100 AD. The legion camp could be occupied by up to 6,000 soldiers. At this time the province Pannonia was formed and Carnuntum as well as the previously non-roman areas around it became part of it. Carnuntum was the second camp of the Legio XV, Apollinaris which was also stationed in Vindobona (Vienna). A separate auxiliary1 camp for a cavalry unit of about 500 men was installed some way south of the legion camp.

Around the fort soon formed the typical Roman canaba, a civilian settlement of merchants, craftsmen, the families of soldiers and everyone else related to the camp and its maintenance. It grew to a large city with all commodities of the time. At a short distance to the west developed a settlement of Germanic inhabitants and later also foreign immigrants, which became the civilian city of Carnuntum. The wealthy citizens had all the luxury they could wish for.

In the early 2nd Century the Legio XIIII, Gemina was moved from the Rhine to Carnuntum, which led to several changes. Due to the protection the fort offered, the civilian settlements grew rapidly. Growth later stagnated because of attacks by Germanic tribes – which ended in a peace treaty.

When Septimius Severus, the leader of Pannonia, rebelled against the Roman emperor and in the process became emperor himself, the civilian city of Carnuntum became the capital of the province Pannonia Superior (Upper Pannonia). During this time the city reached its highest peak in cultural achievements and population. In a conference held in Carnuntum by Diocletian in 308 AD, the division of the Roman Empire into four parts took place. Each part of the Empire was reigned by a separate Emperor. The forming of this Tetrarchy was regulated from the capital Rome. Diocletian stepped down from the office of Emperor of Rome.

As less soldiers were stationed at the border in the 4th Century and a major earthquake destroyed much of the city, Carnuntum lost much of its importance. The beginning of the Migration Period and poverty of the surrounding country also led to its downfall. Last renovations and changes in the military buildings were made in the late 4th Century. Due to many battles the civilian population left or moved inside the walls of the legionary camp. When the Pannonian provinces were given to the Huns in 433, the legionary camp and city in Carnuntum were finally deserted.

Until the 18th Century many ruins of the Roman buildings were still visible above ground, but as they were in the way of the farmers and it was handy to recycle the stones they gradually disappeared. Due to natural changes and the regulation of the Danube, the river now runs a few hundred meters further to the north. Most of the area of the ancient settlements is covered by fields and not houses, which makes it easy for archaeologists to scan for remains of the Roman buildings. Today's streets and fields in the area still show the layout of the original structures.

In the mid-19th Century interest in the area of Carnuntum was rising. Many buildings were excavated and numerous artefacts brought to Vienna, until a museum was built on-site in the early 20th Century. Findings include the legionary camp, bath houses, temples to Mithras and numerous graves and water pipes. Most of the excavated buildings were filled up with soil again to protect them and to allow farmers to use their land as fields. Archaeologists are sure that there also were docks at the river but due to erosion no traces of them could be found. Today part of the area is protected and archaeological research continues and there is a detailed plan of the several square kilometres of the ancient settlement.

The legionary camp was situated at the west of Bad Deutsch-Altenburg at the main street. Civilian settlements were all around it apart from the north-west, where the fort was right at the banks of the Danube. The auxiliary fort, lay further down the road to the south-west. The road then makes a bend slightly to the east through today's village Petronell-Carnuntum and the former city of Carnuntum at its other side. 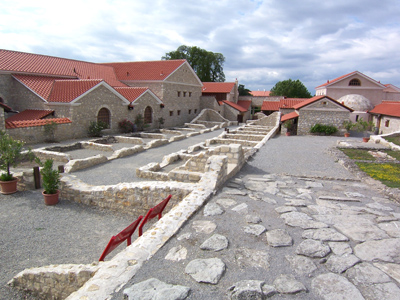 With only one ticket, Carnuntum offers visitors the possibility to enter three sites. The three parts of the museum are not in one place but require a few minutes of driving between them. Every summer there are numerous events at Carnuntum, for instance re-enactments or events with Roman food.

In the south-eastern corner of the former civilian city, close to the Roman city walls lies todays open air museum Carnuntum. Here visitors can find amazing on-site reconstructions of some 4th Century buildings which shall give an impression of life in the Roman Empire. All buildings are fully furnished, painted and have working kitchens as well as hypocausts (under floor heating). The most impressive building is certainly the public bath which has pools with different water temperatures and is worldwide the only on-site reconstruction of its kind.

The open-air museum Carnuntum has a modern entrance area with a gift shop and a small museum, showing mainly Roman gravestones. A small restaurant can be found in a separate building and there is a large playground for children.

Near to the open-air museum there is also a partly reconstructed amphitheatre of the civilian city and the so-called Heidentor ('Heathens Gate') – the remains of a quadrifrons, a triumphal arch with four legs, standing in the middle of a field.

While the information centre at the archaeological park is accessible with wheelchairs and strollers, things look a bit different in the open-air area itself. Bumpy original Roman streets and steps in the buildings can make things difficult. If you are using a wheelchair you will probably have quite a hard time. However, if you give the museum a call before your visit, arrangements can be made to show you the whole museum. Parents of small children are advised to bring a carrier of some kind or be prepared to leave the stroller outside a building and carry their child for some distance.

The amphitheatre of the canaba was excavated in the late 19th Century. It was built in the late 2nd Century and replaced an older wooden building. It was close to the legionary camp, but located in a natural depression, so it did not block the view. Today you can still see the remains of the once 100 meters long, slightly oval amphitheatre. There is a small museum and at special events it is used for performances of gladiator fights.

The museum Carnuntinum in Bad Deutsch-Altenburg was built in the first years of the 20th Century, to create a home for all historic artefacts found in Carnuntum – which meanwhile has become impossible, due to the large number of artefacts. The building itself mimics the design of an ancient Roman villa.

In its upper level the museum shows various artefacts, anything from statues and gravestones to Roman coins, weapons and jewellery. At the entrance area on the lower floor there is a reconstruction of a Mithras temple and a huge model of the whole area hangs at the stairwell.

The Museum Carnuntinum is an old building which was updated with a stair lift between ground floor and first floor rather recently, there is also a ramp leading to the entrance. Still there are a few steps between the different rooms of the exhibition.

1As opposed to legion soldiers, auxiliary troops were not Roman citizens.