Mithras - The Other Saviour Content from the guide to life, the universe and everything 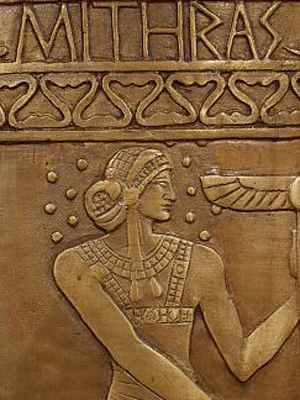 The Eurocentric viewer of modern life may take the underlying mythology of western calendar myths for granted, assuming that, for instance, the winter solstice holiday is basically either about the birth of the Christian god-man Jesus, or about a jolly fat elf who lives at the North Pole and brings toys to good children on 24 December. This same observer may be startled to discover that the origins of many of the beliefs and customs surrounding the celebration of the solstice holiday - both relating to Jesus and Santa Claus - have their roots in quite a different saviour god who brought blessings to mankind - the now almost-forgotten god Mithras.

The cult of Mithras, which flourished from Britain to Palestine in the early centuries of the First Millennium AD, has left us a legacy of winter customs, a number of intriguing archaeological sites, and a strange cult figure in a funny hat. The Roman army bathed in bulls' blood and called one another 'brother' in his name, and poets from Taliesin1 to Kipling2 have honoured him in verse.

The most startling fact about Mithras is that his mystery cult is really a star map, and Mithras himself an astral engineer - the god who moved a universe.

The first mention of Mithraism comes from Plutarch, who notes some Mediterranean pirates who were practising Mithraism in 67BC. But most followers of Mithras were either Roman soldiers (by the 4th Century AD it is estimated that half the Roman army were Mithraist, the other half being Christian), bureaucrats, or merchants. No women were allowed in the cult. The cult spread wherever the Roman army went, from the eastern reaches of the Roman Empire to the farthest outposts in Britain. In the beginning of the 5th Century AD, when Christianity had become powerful enough to eliminate its rivals, Mithraism was finally stamped out - and the vestiges of the cult became an underground influence in Christian practice.

It is difficult to reconstruct the practices of the cult of Mithras. Mithraism was a mystery religion - one that had secret practices and initiation rites. And, unlike other mystery cults whose members eventually revealed the secrets, Mithraists seem to have been a closed-mouthed lot who kept their vows. So most of our information about cultic practices comes from either enemies of the cult, such as the Christian Early Church Fathers, or Platonic philosophers, who were eager to find support for their own theories in Mithraist beliefs. Additional information is provided by modern archaeology, which has found mithraea3 in places as far apart as Israel and northern England.

The Mithras temple was generally a subterranean chamber about 75 by 30 feet with a vaulted ceiling. There was usually a lengthwise aisle down the centre, with a low stone bench on which members could recline during ceremonies. The mithraeum was small, holding only 30 to 40 members at a time. At the back of the mithraeum there was always a representation - bas relief, statue or painting - of the central mystery of the cult, the 'tauroctony', or slaying of the bull by Mithras, who is surrounded by a dog, a snake, a raven, and a scorpion.

Mithraic ceremonies included the ritual sacrifice of a bull, held by torchlight in the temple, which was designed to resemble a cavern because Mithras was said to have killed the bull in a cave. This event was associated somehow with the creation of the world. In one version of the bull sacrifice, initiates stood in a trench beneath the slaughtered animal, and were baptised in its blood.

The Mithraic Brotherhood was divided into seven grades, each with its own initiation rite, baptism, and ritual meal. These were:

Each grade corresponded to a stage in the soul's journey toward the light of the god, and was seen as being under the aegis of one of the planets.

Mithras was worshipped as the guardian of arms and patron deity of soldiers. The custom of shaking hands is believed to have come from Mithraism - as a way of showing that the greeter was unarmed and well-intended. Involvement in the cult was at one time a path to advancement in the Roman army.

The True Meaning of Mithras

Although the Mithras cult was long-believed to have originated in Persia, this theory is now considered doubtful. One theory is that the name Mithras - which is close to the name 'Mithra' from Persian mythology - was borrowed in order to give the new mystery cult an oriental cachet.

So if the Mithras story is not rooted in an existing mythology, where did it come from? The answer is startling - from the skies. The Mithraic tauroctony, or bull-slaying, is a way of telling the story of the 'precession of the equinoxes'.

Over time - a very long period of time, in fact - the apparent position of the stars as seen from the Earth changes because of the changing direction of the rotational axis of the Earth. This causes the equinox to slowly precede, that is, move backward through the zodiac. Every 2100 years, the equinox moves back into another sign of the zodiac. These periods in which a sign of the zodiac governs the vernal, or spring, equinox are called 'ages'. Around the birth of Christ, Earth moved into the Age of Pisces. The Mithras cult, however, was talking about the earlier shift - the one from the Age of Taurus (the bull) to the Age of Aries (the ram).

In about 128BC, the astronomer Hipparchus first discovered the phenomenon of the precession of the equinoxes. At that time it was not known that this phenomenon was caused by a wobble in the Earth's axis. The geocentric cosmology of the time assumed that the Earth was immovable, and at the centre of the universe. Thus, the discovery of the precession of the equinoxes could only mean one thing - the entire universe had moved.

Someone must have moved it. Someone divine, perhaps?

Ancient people saw in the figures of the zodiac a representation of the heavenly beings who would have been capable of such feats as moving the universe. Thus Mithras, the god born from a rock, the cosmic egg, around whom is entwined a serpent - the ourobouros4. His central myth involves a bull, a dog, a snake, a raven, and a scorpion - the celestial figures of Taurus the Bull, Canis Minor the Small Dog, Hydra the Sea Serpent, Corvus the Raven, and Scorpius the Scorpion - the major constellations visible in the night sky from 4000BC to 2000BC.

In short, the Mithras story is a star map - and Mithras the god who moved the universe. Of course, he would have to have been a very powerful god to do that. In addition, he would have needed a place to stand - the imaginary 'place beyond the universe' described by Plato in his Phaedrus:

It is there that true being dwells, without colour or shape, that cannot be touched; reason alone, the soul's pilot, can behold it, and all true knowledge is knowledge thereof.

This was the god whose cult swept the Mediterranean and Europe in the early centuries of the First Millennium AD, and which was only supplanted, finally - but not completely - by Christianity. For Christianity owes many an unacknowledged debt to Mithraism.

Mithraism and Christianity had many similarities - baptism (although Christians used water instead of blood), bread marked with a cross and wine taken in a ritual meal, Sunday as a holy day, and the idea of brotherhood of members with a priest who was called 'father'.

Mithras himself was born of a virgin on 25 December, and lived a celibate life. On 6 January following his birth, the infant Mithras was visited by Magi. He is often pictured between two torchbearers, one pointing upward to heaven, the other downward to hell - just as Christ was crucified between two thieves, one of whom repented while the other did not.

Interestingly, an inscription to Mithras exists which reads:

'He who will not eat of my body and drink of my blood, so that he will be made one with me and I with him, the same shall not know salvation.'

St Peter's Basilica in Rome stands, in fact, on the very spot on which the last Taurobolium - the blood-baptism of the bull sacrifice - took place in the 4th Century in what is called the Phrygianum, referring to Phrygia, the place of Mithras' origin. This is according to David Fingrut, Mithraism: The Legacy of the Roman Empire's Final Pagan State Religion, 1993.

It has been argued that the Emperor Constantine5, long regarded as the founder of Christianity as a state religion in Rome - and now known to have been a follower of yet another solar cult, that of Sol Invictus - simply overlooked the amazing similarities in the different mystery cults of his day in the service of unity in his far-flung empire.

The other figure closely associated in the modern mind with 25 December is, of course, Santa. It is generally known that the name 'Santa Claus' is a corruption of 'Saint Nicholas', a Catholic saint known for a miracle involving children - he restored three boys to life who had been pickled in a vat of brine. St Nicholas later became the patron of Christmas gift-giving in Germany and the Low Countries. Dutch settlers in the state of New York brought their Nicholas customs to the US, and it was there that the definitive Santa Claus myth was promulgated in the form of a poem, A Visit from St Nicholas. This was first published in 1823, and was probably not written by Clement Clarke Moore, as generally held, but by Henry Livingston, a man who reputedly liked children and actually had a sense of humour.

Strange are the ways of folk belief, but, however the vagaries of mythology have worked themselves out in our Christmas customs, the fact remains that Father Christmas, like Mithras:

Although it is true that 'the winners write the history books', the losers - mythologically speaking - nonetheless leave their traces in the subtexts of our daily lives. It is interesting to reflect on the multilayered meanings of customs and symbols which we often taken for granted from year to year.

What Marvin Harris has called 'the dreamwork of Western civilisation'6 often has its roots in causes and circumstances which are long forgotten, but which reach into contemporary life in sometimes surprising ways.

Mithreae are found in many parts of the UK, notably in border areas where there were Roman army garrisons. The best-known of these may be Carrawburgh, on Hadrian's Wall. An excellent virtual tour of the Mithraeum, along with directions to the site, are available at the first link.

1A 6th Century Welsh bard, who wrote Song of the Macrocosm in honour of the Mithraic mysteries.2A 19th-Century English poet, who wrote Mithras - God of the Morning.3Singular, mithraeum. A temple to Mithras.4World-serpent. Think of the Moebius strip.5He of beard fame.6In Cows, Pigs, Wars and Witches, 1974.