Rudyard Kipling Content from the guide to life, the universe and everything 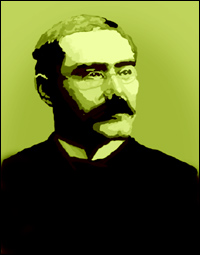 Rudyard Kipling was born in Bombay, India in 1865. At the age of six, Kipling's parents placed him in an English foster home in Southsea. He received many 'traditional English beatings' which he described in several of his works including his autobiography. He attended the United Services College in North Devon, which trained students for entry into military academies. Kipling wanted a military career but his poor eyesight and poor results at the college ended his hopes of entering the army. Kipling returned to India when he was seventeen and worked as a journalist for the Civil and Military Gazette and became an assistant editor and overseas editor. These seven years in India greatly influenced his later works.

Kipling married Caroline Starr Balestier and moved with her to Vermont in 1892. They returned to England after the death of their daughter and settled in Sussex. Kipling is said to have been dominated by Caroline, who had trouble accepting aspects of his character and his views. He lost his son, John, in the 'Great War' and suffered, perhaps as a result, from depression in his later years. Kipling died of a haemorrhage in London in 1936. He is buried in the Poets' Corner of Westminster Abbey.

Kipling was the first Englishman to receive the Nobel Prize for Literature 'in consideration of the power of observation, originality of imagination, virility of ideas and remarkable talent for narration, which characterise the creations of this world-famous author'.

Kipling was best known during his lifetime as a poet. His poem 'Gunga Din' is his best known work but he was also a prolific author of adult and children's books. His works included: The Jungle Book, Kim, The Second Jungle Book, The Seven Seas, Captains Courageous, The Day's Work, Stalky and Co, Just So Stories, Traffics and Discoveries, Puck of Pook's Hill, Actions and Reactions, Debits and Credits,Thy Servant a Dog and Limits and Renewals. Kim later inspired the popular children's pastime, Kim's Game.

The Jungle Book stories are probably Kipling's most famous prose. They were published in 1894 while Kipling was living in Vermont. The best-known of the stories are the three centering about an abandoned 'man cub', Mowgli, who is raised by wolves in the jungles of India. Another famous story is Rikki-Tikki-Tavi, about a mongoose who defends humans against cobras.

You're a better man than I am, Gunga Din!

The last line of Kipling's poem 'Gunga Din' has become part of our shared language even for those who have never heard of Kipling or his poetry.

Kipling wrote a series of poems, The Barrack Room Ballads, about an English soldier named 'Thomas Atkins' serving in India. In 1815, a British War Office publication gave an example of how to fill out forms using the name Private Thomas Atkins. This generic name is now roughly equivalent to the names 'Johnny Reb' and 'Billy Yank' used during the US Civil War. Thomas Atkins was the genesis of the term 'Tommy' commonly used to refer to British soldiers.

Gunga Din was an Indian water carrier for English soldiers in the late 19th Century. Kipling describes Gunga Din though Atkins' eyes. Gunga Din is beaten and abused by Atkins and the other soldiers that he serves and treated with contempt because of his skin colour.

Then we wopped 'im 'cause 'e couldn't serve us all.

Atkins eventually comes to deeply respect the courage of Gunga Din. However, even Atkins' praise, by today's standards, seems insensitive:

An' for all 'is dirty 'ide,
'E was white, clear white, inside
When 'e went to tend the wounded under fire!

Finally, Gunga Din brings Atkins water after Atkins has been wounded and lies bleeding. The water is given in the thick of battle. Gunga Din is then himself 'drilled' by a bullet. His last words to Atkins before he dies are:

'I 'ope you liked your drink', sez Gunga Din.
So I'll meet 'im later on
At the place where 'e is gone --
Where it's always double drill and no canteen;
'E'll be squattin' on the coals
Givin' drink to poor damned souls,
An' I'll get a swig in hell from Gunga Din!
Yes, Din! Din! Din!
You Lazarushian-leather Gunga Din!
Though I've belted you and flayed you,
By the livin' Gawd that made you,
You're a better man than I am, Gunga Din!

'Gunga Din' was shot in the California desert by RKO pictures in 1939.

The film portrays three British sergeants (played by Victor MacLagden, Cary Grant and Douglas Fairbanks, Jr). Sam Jaffe stars as Gunga Din. Gunga Din wants to become a 'first class soldier' and bugler. The English soldiers are surrounded by murderous Indian 'Thugees' (a real sect of violent rebels, from whom the word 'thug' derives) who apparently derive nothing but pleasure from strangling and killing their victims. The film is decidedly pro-British which is unsurprising considering the events of 1939 in the Pacific and the fact that Britain was still subjugating the Indian people at that time.

Eventually Gunga Din climbs a steeple and blows his bugle to warn the British of a Thugee attack. Gunga Din is killed in the process. Much of Kipling's poem is read at Gunga Din's burial ceremony.

The Story of Muhammad Din

Kipling wrote an early short story which quietly demonstrates his compassion for the natives of the Indian colony and his distaste for the attitudes held by of his peers. The story is about a young servant boy named Iman Din and his son Muhammad Din. In the story, young Muhammad is discovered looking around in the 'Sahib's' room and later doing engages in minor mischief in the 'Sahib's' garden. Both of these events cause Muhammad great shame. Muhammad then catches a fever and dies. The attending English doctor observes, 'they have no stamina, these brats.'

Kipling and the Critics

George Orwell criticised Kipling for a variety of reasons, including bad poetry:

Kipling's romantic ideas about England and the Empire might not have mattered if he could have held them without having the class-prejudices which at that time went with them. If one examines his best and most representative work, his soldier poems, especially Barrack-Room Ballads, one notices that what more than anything else spoils them is an underlying air of patronage. Kipling idealises the army officer, especially the junior officer, and that to an idiotic extent, but the private soldier, though lovable and romantic, has to be a comic. He is always made to speak in a sort of stylized Cockney, not very broad but with all the aitches and final 'g's' carefully omitted1.

George Orwell was another Englishman who was also born in India. Orwell's 1942 essay on Kipling describes Kipling as a 'good bad poet'. Orwell observes that Kipling's work has outlived several generations of now largely forgotten 'pansy leftist' critics. Orwell states that calling Kipling a 'Fascist' is unjustified, but:

It is no use claiming, for instance, that when Kipling describes a British soldier beating a n****r with a cleaning rod in order to get money out of him, he is acting merely as a reporter and does not necessarily approve what he describes. There is not the slightest sign anywhere in Kipling's work that he disapproves of that kind of conduct - on the contrary, there is a definite strain of sadism in him, over and above the brutality which a writer of that type has to have. Kipling is a jingo Imperialist, he is morally insensitive and aesthetically disgusting. It is better to start by admitting that, and then to try to find out why it is that he survives while the refined people who have sniggered at him seem to wear so badly.

Orwell observes that a recitation of a Kipling poem in a British pub in 1942 would draw some interest, while a recitation of Shakespeare would be most unwelcome. Orwell described Kipling's poetry as 'a shameful pleasure, like the taste for cheap sweets that some people secretly carry into middle life'.

The words in 'White Man's Burden', which was released in 1899, highlight Kipling's 'noblesse oblige' attitudes and show an unapologetic belief in racial and class superiority. This poem was intended to encourage Americans to proceed with the US-Philippine War which eventually placed Puerto Rico, Guam, Cuba, and the Philippines under American control during the first American Imperialist expansion. Future American president Theodore Roosevelt read the poem and said that he considered it 'rather poor poetry, but good sense from the expansion point of view.'

Take up the White Man's burden
Send forth the best ye breed
Go bind your sons to exile
To serve your captives' need;
To wait in heavy harness On fluttered folk and wild
Your new-caught, sullen peoples,
Half devil and half child.

A Man of His Times

Kipling's attitudes seem jarring and offensive to many after more than a hundred years. However he was a man of his times who could and did speak out against establishment injustices. Kipling shows a deep compassion and keen appreciation for the cost of war and the consequences to the ordinary soldier of incompetent 'amateur' senior officers in works like Stellenbosh.

Kipling's poem 'The Last of The Light Brigade' describes a few elderly British soldiers starving and neglected by their government while 30 million people and schoolchildren recite the past glories of the 'light brigade'.

There were 30 million English who talked of England's might,
There were 20 broken troopers who lacked a bed for the night.
They had neither food nor money, they had neither service nor trade;
They were only shiftless soldiers, the last of the Light Brigade.

In 1995, the BBC conducted a poll over a period of several weeks to discover the 'Nation's Favourite Poem'. The poem 'If' by Kipling was determined to be Britain's favourite.

If you can dream, but not make dreams your master,
If you can think, but not make thoughts your aim
If you can meet with triumph and disaster,
And treat those two impostors just the same
If you can bear to hear the truth you've spoken,
Twisted by knaves to make a trap for fools,
Or watch the things you gave your life to, broken,
And stoop and build them up with worn out tools.

If you can fill the unforgiving minute,
With sixty seconds worth of distance run,
Then yours is the world, and all that's in it,
And, which is more, you'll be a man my son.

If Kipling had only produced his prose, he would probably have faded into obscurity. Kipling's poetry works, including 'Gunga Din', will live on to document the excesses of class and racial attitudes of 19th Century Britain and British Imperialism. Kipling's poetry has earned for him equal measures of both lasting fame and infamy.