Roman Construction Methods: The Arch Content from the guide to life, the universe and everything 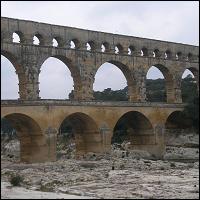 Though not a Roman invention1, the arch was used extensively by Roman engineers in many types of buildings, including bridges, gates and aqueducts. Elaborate arches could be extended in a tunnel-like fashion to form a barrel vault; two barrel vaults overlapping at 90 degrees formed a cross-shaped 'groin vault'. Taken to extremes, a groin vault develops into a dome. The Flavian Amphitheatre in Rome, more popularly known as the Colosseum, was formed from a series of pillars and arches.

A Roman arch2 was built of stone with a concrete core for durability. The shape of the arch naturally causes the weight of the structure to compress the arch, transferring the forces to the columns or piers supporting the arch. This means that the construction is always in a state of compression (the state in which stone and concrete are strongest), and the forces created by the weight of the structure are equal on each side, cancelling each other out3. This has meant that many of these bridges had a very long useful life - many are still in use today.

The method of construction was simple. The masons cut large wedge-shaped stone blocks equal in size and shape. They were tapered so that when laid out they formed a half circle. When the arch was constructed, the last stone4, at the top of the arch, was fitted and locked the others together. This meant that the arch could distribute the weight evenly throughout, forming a very stable structure. The most common uses of the arch are the bridge and aqueduct.

Sooner or later, all roads may need a bridge - they were built to cross valleys or rivers and to avoid long detours. The key to the Roman bridge is the arch, making the construction of complex and large bridges possible.

The Stages of Building a Roman Bridge

There are five main stages to the building of a standard Roman bridge:

The river banks were surveyed for a suitable site for the crossing point. Ideally the banks would be firm and the bed of the river firm and stony. Bridges were often built on or near existing fords for this reason. Teams were sent out to plan the route of a proposed road and often altered the course to use a suitable river crossing point. This job was often given to the military engineers.

The foundations for a single-arch bridge were cut into the banks at each side of the river. The foundations were built of stone, with rubble and concrete infill. Good foundations were important as they prevented the arch of the bridge from spreading and collapsing. Multi-arch bridges use arches which are more upright than standard arches, with longer straight piers supporting a semicircular arch. The piers are often braced with a stretch of masonry known as a travertine rib or missionary band5, which helps protect against sideways movement caused by pressure from the arches above.

The stone arch was constructed over a timber frame that was the intended shape of the arch. The inside of the arch was stone lined as were the outer walls.

Note, the maximum height of an arch was 21 metres, to avoid collapse caused by twisting forces; the maximum span was approximately 34 metres. If extra height was required, it was gained by placing a second set of smaller arches on top of the first, and in some cases a third row of yet smaller arches6. The maximum recorded height was 51 metres in three rows of arches.

When the arch was finished, the stonework of the rest of the structure it was supporting was completed. The method used in laying the stonework, known as stretcher and header7, resulted in incredibly strong structures which could be further strengthened with stone joints and metalwork. The size of the stone blocks was reduced as the bridge got higher. The core of the arch and the road bed were often of rubble and concrete infill.

The parapets were built of stone and the road surface was laid. All single-arched bridges were slightly higher in the middle than at the edges to shed rain  water and aid drainage.

Starting with the same initial stages, the only difference was the construction of evenly-spaced piers on the riverbed. This was achieved by sinking two concentric rings of wooden piles into the riverbed to form enclosed areas. The space between the rings was packed with clay forming a simple coffer dam and the water and mud bailed out, allowing the piers to be constructed on firm dry ground. The cut stone piers were hollow and were filled with large uncut stones, rubble and concrete to form small islands. These were the pier foundations. Construction was then completed as previously described in stages 3 and 4.

Because multi-arch bridges tended to be longer than single-arch ones, they normally had a slight slope from one end to the other to improve drainage.

Roman concrete was made with slaked lime, sand and volcanic ash. The method of making this was forgotten and it was not until the 19th Century that anybody thought of a mixture that was better, when Portland cement was invented. Roman concrete could set under water in much the same way as modern concrete.

The trick to making good concrete is to get the silicon in sand to chemically bind to the calcium from the limestone (calcium carbonate). Portland cement uses fine china clay. The Romans used volcanic ash which is, essentially, fine, pure crystallised sand (silicon dioxide). The reasons modern cement is better than Roman cement is not because it is stronger or longer lasting (it can be, but many commercial varieties aren't), but because the clay can be pre-mixed with the treated lime mixture (slaked lime) and then ground into a powder (clinker) and stored in rough conditions in paper bags. Roman cement had to be mixed on site and slaked lime is very dangerous when wet and is not easy to store. To keep it dry they had to use sealed amphoras.

An aqueduct in its simple form is a bridge to move water, to supply a town or settlement. This was built in the same way as a bridge over a river. The main difference between an aqueduct and a bridge is that the level of the water channel was precisely engineered to provide a slight slope or fall to allow the water to flow. The most striking forms are those that consist of three or four rows of arches, built one on top of the other to achieve height to span a valley.

Some of the best examples of Roman aqueducts are:

1Originally the arch was a Mesopotamian idea.2Also known as a voussoir arch.3To such an extent that some arches were built without any mortar.4Years later, the last stone at the top of an arch became known as a keystone and became larger than the rest as a feature; in Roman times, the top stone was the same shape as all the others.5This is a course of a different type of stone which protrudes slightly at the sides. It stabilises the top of the pier and provides a foundation to the arch.6Most often seen in aqueducts, but the best example is perhaps the Flavian Amphitheatre in Rome.7This meant one layer or course of stones was laid lengthways and the next was laid end outwards.