Roman Construction Methods: The Road Content from the guide to life, the universe and everything 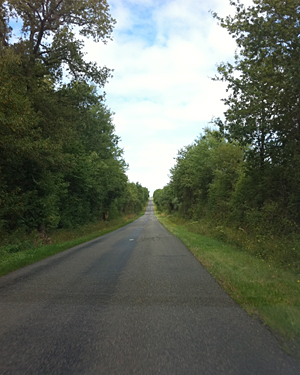 The Romans probably discovered how to build roads from their pre-Roman ancestors, a tribe called Etrusci or Tusci from Northern Italy, commonly referred to as the Etruscans. The Romans for many reasons became excellent road builders. Roman building methods were adapted and improved as time went on and as skills improved.

There were laws governing the construction of roads dating from 450 BC; for example, stating that the width should be 2.5 metres and also stating the rights of passage on the Empire's roads. The 9,000 miles of roads that were built in Britain represented a fraction of the total of over 55,600 miles built throughout the Empire. The network of roads stretched from Britain east to the Silk Road and the trade routes to China. As an example of how the roads improved communication, it was possible for the official mail to travel 500 miles a day using this system. Overnight accommodation for travellers was placed at 15 mile intervals along the main routes.

Vitruvius (Marcus Vitruvius Pollio 75-15 BC) was a military engineer, architect and builder. What makes him important is that he wrote the De Architectura, the only Roman work on Roman architecture of the time that is known to have survived. Dedicated to the emperor Caesar Augustus, it is now known as The Ten Books and describes many Roman and Greek building methods.

During the invasion roads were vital to the success of the conquest of Britain. As the legions pushed north disregarding the old track ways, they laid roads called via munire (tribute roads) to link the forts they established. Many of the early settlements were built near these forts; later new towns developed near the major roads.

The next type of road to develop was a network of minor trade roads called viae rusticae (rural roads) built to serve local trade and manufacturing centres. Last to be built was a network of local paths and service roads, some of which were unsurfaced, known as viae terrenae . These linked local buildings such as shrines, houses and estates to the network.

The Roman road system allowed the rapid spread of Christianity. The apostles and many Christians travelled across the Empire easily, Roman troops even providing some protection on the way.

The first thing to remember about Roman roads is that they were built wherever the military surveyors wanted. There were no planning restrictions and any objections of the local population were at the bottom of the list. This is one reason why they are so straight1; the route did not have to go round anything apart from natural obstacles. Initially the Romans built roads mainly for military transport, to allow the rapid movement of troops and to transport the supplies to sustain them.

When things quietened down, the civilian use of the road began with settlers who followed the army into newly pacified areas. The areas near the military bases often formed the first settlements. After the settlers came the traders and farmers, using the roads to move goods and produce. These could be moved quickly and safely and breakages were fewer and food could travel further and arrive in a fresh condition. Consumption of luxury goods and items from other parts of the Empire also went up as a result of the improved road access.

The road system was so effective that as the Empire came to an end invading armies travelled along them to attack the heart of the Empire itself. In the final years of the Roman occupation of Britain some roads were blocked to hinder raiders. When the Empire collapsed the road network fell into decline and practically disappeared. The communication system provided by the Roman road network was not rivalled until the 19th Century when the railway system spread throughout Europe.

The Method of Building a Roman Road

There were five main stages to the building of a standard Roman road:

The final makeup of the road was determined by three factors: its intended use, the materials available locally and the terrain it was crossing.

The Method for Roads on Soft or Wet Terrain

The terrain was an important factor on soft or boggy ground. There could be no ditch as in stage 2; instead the road was supported on timber foundations. Large baulks of timber were laid on the ground surface, and fixed in places with piles driven into the soft ground. On top of these there were laid lengths of timber in pairs parallel to the direction of the road giving the appearance of railway sleepers and rails.

The second stage of this process was either to pack the spaces between the timber rails with brushwood or, on even wetter ground, to lay timber across the timber rails. In the case of the brushwood packing, it was laid down in bundles in two layers laid in opposite directions to each other.

On this type of ground surface much more timber was used to form a continuous surface on which stone slabs or similar materials could be then laid, as in stage 5. In some cases the stone dressing was omitted and a simple wooden road was laid. The final surface layer was of coarse small stones that were levelled and compacted firmly. This layer was often topped with sand or a mixture of sand and gravel. The surface layer was then laid; the smaller course stones were easier to level, and this layer was also compacted firmly. Sometimes the layer was topped with sand or it consisted entirely of a mixture of sand and gravel.

After the finishing of the road surface there were two final things to do: construct an agger, or embankment, on each side of the road; and then dig a drainage ditch on each side also. The agger was built from the spoil from the road's foundation trench and from the drainage ditches dug each side of the agger. This lifted the road slightly above the level of the surrounding countryside. This cleared area also made it difficult to set an ambush for troops or travellers as the area improved the view of the road ahead and travellers could see any potential dangers.

The Milliarium Aureum4 was the milestone that was placed in Rome, on the orders of Augustus, as the starting point from which all mileages to other parts of the Empire were to be measured. Milestones on Roman roads gave the distance to Rome as well as local information, and were placed 1,000 paces apart. All roads were provided with milestones which showed the distance to each town on that section of the road served. Often the milestone gave the date of the road's construction and the name of the Emperor.

Initially, the cost of the road was borne by the state; after that it was the responsibility of the local government to raise the money to keep the road in good repair. An official called the Curatores Viarum was appointed who had to raise the money to maintain the roads in his care. Improvements and maintenance work would be carried out by slaves or other forced labour and prisoners. Roman roads were not free. There were tolls collected at the towns along the course of the road. As a point of interest, the bridges were a particular source of revenue. This explains the survival and continuous use of fords along the routes.

The best Roman road to visit today is found in Sutton Park in Birmingham; the visitor can walk it in safety as it has not been commercially used since the Romans left Britain.

The Austrian National Library is home to a parchment scroll The Tabula Peutingeriana, created in the Middle Ages. This is a copy of a road map from the late Roman Empire. The seven-metre parchment shows a network of Roman roads from Spain to India. The scroll is listed on Unesco's Memory of the World Register.

Some of the Major Roman Roads in Britain

These are not the only roads built in Britain but are the best known. The names of the roads are not Roman names. Instead, they date back only as far as Saxon times, although they they are names we still use today. For example, the name 'Ermine Street' is not the road's original Roman name but, rather, the Saxon name for the road, 'Earningstraet' the road of Earn's folk. The Romans named the road after the Censura or Censor5 who was responsible for its construction, or simply by where it went. Some of the better-known roads in Britain are listed here in approximate order of length:

1One of the other reasons was the Roman method of surveying which lent itself superbly to long straight roads.2Not always used on all roads.3Higher in the middle than at the edges.4The Golden Milestone.5The holder of the post of Censor was an elected position, with an official term of five years. Part of the duties of the office was to control public finances which included road building.