The Groma: The Tool That Built An Empire Content from the guide to life, the universe and everything 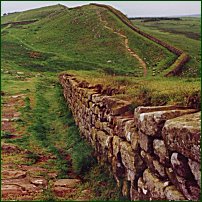 Simple to make and easy to carry, the groma1, or the surveyor's cross as it is sometimes known, was the most widely-used Roman surveying tool.

The Upright: a one-and-a-half to two-metre-long pole. One end was metal-tipped to facilitate pushing it into the ground.

The Rostro: an upwardly-curving right-angled extension, with an end fixed to the top of the upright via a swivel mount. This extension rotated horizontally through 360 degrees. The centre-point of the groma was attached horizontally to the upper vertical end of this extension via a swivel mounting. A plumb line was fixed beneath the groma's mounting point to act as a third sighting point.

The Groma: a simple cross of wood with arms of equal length. Each arm had a plumb line suspended from the end of it; each line was equal in length to the other three plumb lines.

The Marker Peg: a peg positioned in the ground below the groma-mounting plumb line to mark the datum point.

When the groma was set up, generally on a high point or rise in the ground, the surveyor would turn the groma (the cross) so that one of the arms pointed in the direction that the road or construction was to take.

The surveyor would send out an assistant with some ranging poles; the assistant would stop after about 125 paces and hold a pole vertically with one end on the ground. The assistant was directed to move until the surveyor could see that the pole was in line with the three strings of the groma: the two on opposite arms of the cross (north and south) and the plumb line fixed to the groma end of the rostro. The process was repeated until the assistant had run out of poles, leaving a straight line of poles marking the course of the road. The surveyor would then move forward to the last pole, set up the groma again and send out his assistant with ranging poles to repeat the procedure.

If laying out a right-angle or corner of a building, the groma's east and west plumb lines would be used.

Who Used The Groma

There were four main specialist types of Roman surveying;

Surveying With A Groma

The roads were surveyed in the same way throughout the Roman world. It was impossible to lay out a perfectly straight road over many miles using the groma. This explains the course corrections (slight bends) that occur every few miles2.

Groups of surveyors were used when a road was built between two distant points.

1Possibly from gnomon, meaning indicator in Greek, which was originally a tool used to locate north without the aid of a compass.2As it wasn't a precise instrument and errors crept in because it relied on the operator's eye.