Islands and How They are Made Content from the guide to life, the universe and everything 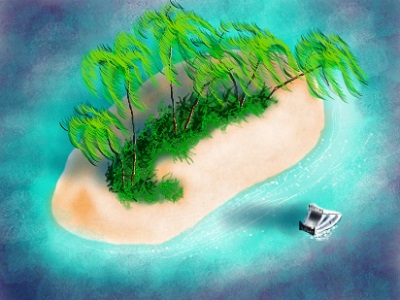 Earth, stream and tree encircled by sea
Waves sweep the sand from my island.
— Robert Fripp

An island is a piece of land surrounded by water. Whether it is a tiny crag of rock in a lake, or the massive ice-covered expanse of Greenland, the same word is used.

The dictionary definition is more specific: 'a tract of land surrounded by water and smaller than a continent' (Merriam Webster). Australia is undoubtedly surrounded by water, but it is considered to be a continent. Even the supermass consisting of Europe, Asia and Africa could be considered to be an island, but traditionally, continents are not islands. There is no real dividing line between islands and continents other than tradition. This says that Australia is the smallest continent. Anything bigger is also a continent, while anything smaller is an island. So Greenland is the biggest island.

Islands are not distributed evenly across the Earth's oceans. Instead, they tend to be grouped into clumps known as archipelagoes. The biggest concentrations of such islands are: 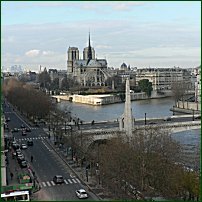 A third possibility, besides being in a lake or the sea, is for the island to be in a river. Here, the river splits into two channels, one going each side of the island. Such an island tends to be long and narrow.

One notable example of a river island is the Île de la Cité in the river Seine in Paris. Originally, the entire city of Paris was on this island, but as the city grew, it spread to the surrounding banks of the river. Now the island holds little more than the Cathedral of Notre Dame and the church of Saint-Chapelle.

While most islands are natural, some have been made by humankind. One example is the city of Venice which consists of hundreds of islands, each built by sinking wooden piles into the base of the Venetian lagoon, and then piling in stones and rubble. Before the city was built, there were just a few mudbanks.

Another type of artificial island is the Peloponnese in Greece. This huge hunk of land, equivalent in size to Wales or Massachusetts, was a peninsula until the end of the 19th Century. In 1890, a deep canal was cut across the narrowest point of the isthmus, effectively separating the Peloponnese from mainland Greece and making it into an island.

How Natural Rocky Islands are Created

There are five main ways in which islands made of rock are created.

The exact level of the oceans is somewhat variable and depends very much on how much of the world's water is locked in the icecaps at the north and south poles. Some parts of continents are low enough that when the sea level rises, the higher parts become islands. For example, during the last ice age, sea levels were much lower; Ireland and Great Britain were connected to the mainland. As the ice melted, they became islands, but they are still part of the continent of Europe. If sea levels continue to rise due to global warming, parts of Denmark and possibly the 'leg' of Italy will become islands. Islands formed by flooding a continent are easily identifiable because the sea between them and the rest of the continent is shallow.

2. Chunks of Continent that Break Off

The continents are on giant plates of rock known as 'tectonic plates', floating on the magma of the Earth's mantle. Sometimes, due to fractures deep within the earth, portions of a continent can break off and go in a different direction. They become mini-continents, but are known as islands. Such islands include New Zealand, Madagascar and Greenland. You can tell this sort of island because they are large and separated from the continent by deep sea.

Most islands in the worlds are created as Island Arcs. These are long curved lines of small volcanic islands. Examples include the islands of the Caribbean, the South Sandwich Islands in the Southern Ocean and the Marianas and Aleutian Islands in the Pacific.

Where an ocean floor tectonic plate collides with another ocean floor plate, the denser plate is pushed under the less dense one. It bends downward at an angle of 30 - 40° and continues on downwards into the hot mantle. Because the plate is part of a sphere and is being folded at the plate boundary, the boundary will form a curved line along the Earth's surface. As the folded plate is pushed further into the heat, it starts to melt, and the lighter material in the melting plate bubbles up, puncturing the upper plate and forming a line of volcanoes. Because the boundary is curved, the line of volcanoes will also be curved, and an island arc is formed.

A very good example of an island arc is the Antilles, the line of islands that separate the Caribbean Sea from the Atlantic Ocean. They lie on the boundary between the Caribbean tectonic plate and the plate that forms the western Atlantic floor.

Some parts of the Earth's mantle far removed from plate boundaries are particularly hot, and currents of magma come upwards, puncturing the ocean crust and forming a volcanic island in the middle of the ocean plate. As the plate moves, the island is carried away from the hot spot. New magma coming up from the hot spot creates a new volcanic island. This continues until there is a line of islands. The one directly over the hot spot is the youngest and biggest. As you go along the line, they get older and smaller, as the elements have worn them away.

A good example of hot-spot islands are the Hawaiian Islands. The Pacific Plate is moving westward, so the islands at the eastern end of the chain are the newest and the biggest. The islands get steadily smaller as you go west and the ones further west are much older and more eroded so they are much smaller. The chain continues on under water beyond the last island in the chain.

The rarest way in which islands are formed is when two tectonic plates are moving apart, such as at the centre of the Atlantic Ocean. As the plates separate, magma wells up to fill in the rift between the plates. This can occasionally lead to volcanoes which form islands tall enough to reach the surface. The Azores islands are examples of this sort of island.

The reason this sort of island is rare is that as the plates get further from the rift, they cool and over millions of years will contract, causing the islands to sink back down under the sea.

Iceland is a unique example of where there is so much magma coming up that the level of the bottom of the sea has reached the surface and the rift is actually on dry land. The island of Iceland is continually growing at the centre. The two halves are moving apart, the west side moving west and the east side moving east. New material is being provided at the join by volcanic eruptions.

Islands of Mud and Sand

Islands are not always made of rock. Many of the world's islands are made from mud or sand which is deposited by currents of water. In rivers, the deposited material is usually mud while in the seas it is usually sand. The current carries along the material, but when the current changes direction the water can slow down suddenly and the material will be deposited on the bed of the river or sea.

Many large landmasses have edges which are constantly changing due to sand being deposited by currents or being taken away. Lines of sand islands known as barrier islands frequently form just off shore and may join up to form long spits of sand such as the Lido island in Venice, the entire coast of New Jersey, USA, or the Fresian Islands in the Netherlands.

One other substance is significant in the formation of islands - coral. This hard crystalline substance is made by tiny sea creatures known as coral polyps. The polyps build the coral as a home for themselves and are continually extending it. They live in warm, shallow water1 where there is plenty of sunlight and plenty of microscopic food in the water for them to eat. As the coral grows, it joins together to form a 'reef' and if there is enough of it, a coral island will form.

One particularly interesting type of coral island is the atoll. Here a coral reef forms in a circle around a volcanic island. But then the island starts to sink into the ocean due to plate movement and contraction in the ocean floor. This happens slowly, so as the coral moves downwards into the ocean, the polyps build upwards to stay in shallow water. Eventually the island has disappeared under the sea and all that is left is a circlular reef of coral, with a protected 'lagoon' in the middle. This is an atoll.

The Death of Islands

The world is constantly changing and islands will not live for ever. There are four main fates for an island:

All of these slow deaths take millions of years to come about. In the meantime, islands continue to exert a fascination on mankind. Who hasn't dreamt of relaxing on a palm beach on a tropical island?

1There is such a thing as deep sea cold water coral, but it doesn't concern us here.