Plate Tectonics for Beginners Content from the guide to life, the universe and everything 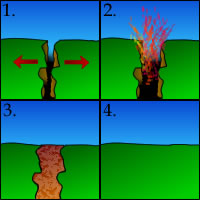 This entry introduces the phenomenon called 'plate tectonics'. It will leave many questions unanswered and cut some corners, while trying to explain the basic concepts. These corners and questions would make the entry way too long.

Plate tectonics means the 'generally fully accepted theory that the solid Earth's surface is made up of a small number of large plates of lithosphere1 which are in relative motion and internally largely undeformed'2. Volcanoes and earthquakes concentrate in boundary areas between these plates.

A Short History of the Theory

The theory of moving plates originates from the early 1900s. A German meteorologist called Wegener proposed that some continents (Africa and South America for example) fit so well together that this could be only achieved if they once had formed a super continent, called Gondwanaland, which had then broken apart into separate continents. This Continental Drift theory would have answered lots of open questions about similar types of fossils found on different continents and why some old geological structures seemed to continue on both sides of the Atlantic. Unfortunately, Wegener couldn't satisfactorily explain what would make the plates move.

Years passed and Wegener's theory remained as an interesting but not generally accepted one. In the 1960s, lots of new evidence about the age of oceanic crust, magnetic anomalies within rocks, ocean bottom topography and deep structure of Earth had piled up. Several researchers contributed to this work, but in 1966 Tuzo Wilson introduced the basic mechanisms for moving plates. His principles still explain the basic mechanisms controlling the phenomenon. Plate tectonics is probably the single most important discovery in earth sciences since the round Earth was accepted.

Wilson also proved that the plates had indeed all been together as Wegener had argued. And even more important was that they would all at some point in time be piled up again, simply because the Earth is limited in size and plates moving in different directions are bound to collide someday. This cycle of rifting apart and piling up again is known as Wilson's cycle.

Oceanic plates are continuously formed at mid-ocean ridges and destroyed at converging plate boundaries. As already mentioned, oceanic plates are younger (rarely over 200 million years) than continental ones. An important feature is the fact that the oceanic crust gets colder, thicker and heavier with increasing age. At first, mid-ocean ridge plates are only few kilometres thick and can grow up to 180 kilometres before being destroyed at subduction3 zones. The only really large oceanic plate (currently) is the Pacific plate.

To make things more difficult, a continental plate can have oceanic material attached to its sides. For example, the Eurasian and North American plates have large oceanic parts integrated into them under the Atlantic. These parts will eventually break off, once they have grown too thick, and will form plates on their own.

The Force Driving the Plates

The force driving the plates is mantle convection. The Earth's mantle from the bottom of the plates down to 2,900 kilometres is supposed to be heterogeneous in temperature, and this causes convection currents where hotter material rises up, traverses under the plates and, after cooling, sinks down. Plates ride on top of such currents4. The mantle is not in a molten state due to high pressure, but it deforms like plastic.

Mid-ocean ridges are narrow zones where rising convection from lower parts of mantle breaks through to the 'surface' (ocean bottom to be more exact) and forms a new crust. On a mid-ocean ridge, the two oceanic plates are moving apart in opposite directions. The name of the ridges is misleading, since most of them are not in the middle of the oceans. Iceland is the only place where a mid-ocean ridge rises to dry land. This is caused by exceptionally large lava output. Reasons for this are not clear. Mid-ocean ridges and new oceans develop slowly from rifts like the East Africa and Red Sea system.

Transform faults occur between both types of plates. In this type, two plates sharing a boundary are moving in opposite (or almost opposite) directions along this shared surface.

Collision boundaries form where two plates moving from opposite (or almost opposite) directions meet. If the plates moving together are both oceanic, normally the older (heavier!) one will subduct below the younger one. Due to thrusting and magmatism related to such a boundary, an island arc will form. The Japanese islands are a good example of this process. Subduction of oceanic plates back into the mantle is the reason why they are so much younger than continental ones.

In a continent-ocean collision, the oceanic crust is again the one subducting. South America for example is being subducted by the Nazca plate from the west. The continental arc (the Andes) caused by deformation and magmatism forms on the edge of the continent.

In a continent-continent collision, there is no real subduction because the continental plates are too light to dive down into the mantle. The lower plate just pushes itself under the other one while lifting it up and causing large-scale deformation. Currently, the best example can be found at the Himalayas, where India is working its way under the Eurasian plate, creating the mountains as it goes.

The study of Plate tectonics is not for those in a hurry. Relative plate movements are normally well under 10 centimetres per year. But let's take Earth's presumed age - 4.5 billion years - and a motion speed of only 1 centimetre per year and start counting. The result is that even with this really slow speed, plates could have travelled around the globe over 110 times.

Plate Tectonics on Other Planets

Currently there is no direct evidence supporting plate tectonics on other planets of our solar system. There are theories that claim that Mars might have had plate tectonics at some stage, before cooling down and drying up. Current evidence beyond Earth is sparse and its quality varies, so the final word is yet to be heard about extra-terrestrial plate movements.

1Crust and upper mantle together, thickness varies from 2 to at least 250 kilometres.2Dictionary of Geology by P Kearey, 1996.3In subduction oceanic plate bends downwards under another plate and into the mantle where it will eventually melt.4Note that this extremely simplified version about what's happening down there; for more information read about the forces driving the plates here.