Talking With Cats Content from the guide to life, the universe and everything 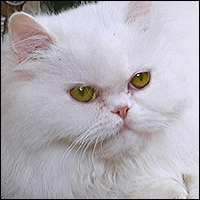 You've seen them both at work and games
And learnt about their proper names,
Their habits and their habitat:
But
How would you ad-dress a Cat?
– TS Eliot, The Ad-dressing of Cats

You may want to talk to your cat; if you do, you'd certainly like it to listen to you, and you'd like to get some sort of a response in return. So how do you address a cat, and how do you interpret its response? The philosopher Wittgenstein said: 'If a lion could talk, we could not understand him.' This is probably true of domestic cats as well, but this Entry will attempt to explain those areas where human and feline thought processes do overlap.

First, we'll explore the range of sounds a cat makes:

Of course, cats don't just talk with their sounds, they also use body language. The most important parts of their body in this are the ears, tail and eyes.

The Psychology of Cat Communication

You can see that there are some ideas in a cat's vocabulary that involve attacking and being attacked. This is because cats communicate for different reasons than we do. Humans are pack animals. We thrive on company and our speech is designed to reinforce a bond of togetherness. Most people think the purpose of speech is to communicate information, but if you examine what the average human says on a night out at the pub, a lot more of it is to be sociable than actually imparting information.

Cats, on the other hand, are solitary creatures. In the wild they tend to live and hunt alone, and if two cats come together a fight usually occurs. Even mating takes place amid an atmosphere of intense dislike between the concerned parties. So cat communication is much more about aggression than human communication is. The main cat-to-cat calls are the caterwaul for distant aggression and the hiss for close-up combat.

That's why there's not much you can do with a cat when it is making either of these sounds, other than step back out of harm's way.

Cats also make great use of their eyes as offensive weapons. Two cats fighting will often do a face-to-face, staring into each other's eyes in an attempt to intimidate the other. This is why when talking to your cat you should avoid staring directly into it eyes – it will take this as aggression.

Of course, the one cat-to-cat interaction that does not involve aggression is a mother cat with her kittens. The kittens will meow when they want food, and this call easily gets transferred to the cat meowing at its owner when it wants food or access through a door. The chirrup is similarly something that cats might do in a family, although it rarely occurs between two adult cats.

Sounds You Should Make

So now it comes to how you should talk to your cat. You've already been told not to stare directly into its eyes. This would be interpreted as a hostile act, especially so if you do it while peeping out from behind something at a height of six inches above the ground. Expect to get your face ripped off if you try this. No, when you are looking into a cat's eyes you should blink slowly. This reassures it that you are not being aggressive.

As an interesting aside, it's worth noting that, because cats are nocturnal creatures, they try to maximise the amount of light into their eyes by widening their pupils. When a cat is about to pounce, you'll see the pupils of its eyes suddenly widen. This means you've got about a quarter of a second to protect yourself. And since the action is completely instinctive and involuntary, the cat doesn't know it's doing it, and doesn't understand how you're always able to anticipate its attack. In its eyes, the force is with you.

So what should you say to your cat? Perhaps it is time to consult TS Eliot again:

I bow, and taking off my hat,
Ad-dress him in this form: O CAT!

I find that if I talk to the cat as if he is an old friend that I haven't seen in a few months, then he will come over to me and answer back. Not 'Here kitty, kitty' but 'How are you, cat, are you well?' Crouching down and snapping my fingers while talking, the cat will usually approach close enough to allow me to tickle him above the shoulders.
– An h2g2 Researcher

Since cats' meows and caterwauls go up and down in pitch a lot, it is a good idea to do this yourself in your speech. The cat won't understand the words, but will understand the emotion in the speech; exaggerating the up and down will make it more interesting for it.

Like most smaller animals, cats can hear much higher pitched sounds than humans. Many people use a higher pitched voice than normal when talking to cats, although we're not aware of any experiments which show this helps. One thing is certain, though. A cat will hear a high-pitched 's' sound very clearly at a great distance. If you want to attract a distant cat's attention, a simple 's' will suffice. This is probably why the traditional 'puss-puss-puss' call is used.

If I Could Talk to the Animals

With a bit of practice, you'll have all the cats in the neighbourhood coming to you when you call them. You'll be able to get your cat to roll over when you say: 'Roll over, Grampuss!' And when your cat decides it's had enough and prepares to attack, you'll know the signs and make a hasty retreat in time.