'Hogfather' - the Television Series Content from the guide to life, the universe and everything 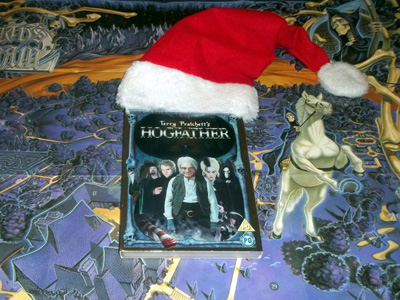 Hogfather was the first live-action adaptation of a Discworld novel, and the first adaptation in the 21st Century. Made as two two-hour episodes1 and based on the 20th Discworld novel by Sir Terry Pratchett, it was broadcast on British satellite channel Sky One on Christmas Day and Boxing Day 2006.

'Twas the night before Hogswatch and all through Susan's house, not a creature was stirring, not even a mouse – well, not after the Grim Squeaker had visited, anyway. While Susan, Death's granddaughter, works as a governess she is unaware that an assassin named Teatime has been hired to kill the Hogfather, the Disc's equivalent of Father Christmas. He does so by controlling children's beliefs by using magic on their teeth held in the Tooth Fairy's castle, severely weakening the Hogfather and preventing him from delivering presents.

Knowing that lack of belief will kill the Hogfather and catastrophe will then fall, and that only if children believe in the Hogfather can this be averted, Death dresses as the Hogfather. Soon he wears a fake beard, enters houses via chimneys and asks children if they have been naughty or nice to try and keep their faith in the Hogfather alive.

Why are other mythological beings springing into life? Will Death 'sleigh' those who do not believe in the Hogfather? Are the wizards of Unseen University really the cleverest people on the Disc, and able to help Susan discover what is going on? Will Death and Susan spend Hogswatch together? How exactly do you correctly pronounce 'Teatime'?

Many of the characters seen in Hogfather had previously appeared in Soul Music, which animation studio Cosgrove Hall had adapted in 1997. Tony Robinson and Nigel Planer had previously narrated Discworld audio books, as well as providing voices for computer games Terry Pratchett's Discworld, Discworld II - Missing Presumed...!? and Discworld Noir. Despite this, Tony Robinson was only cast as Crumley at the last minute, the day before filming.

Hogfather has since been dedicated to Ian Richardson, who died shortly after it was first broadcast.

Popular recurring Discworld places that appear in Hogfather include:

They'd got it, all the way to the top. They knew how it should go, and they were still confident enough to include me in from the script onwards.
- Terry Pratchett

The adaptation was produced by Mob & Co Films on behalf of Sky One, written and directed by Vadim Jean, with the script officially 'mucked about with' by Terry Pratchett. This meant that every draft script written by Jean was submitted to Pratchett for his approval and input. He later said:

Hogfather was the channel's second most-watched programme to date. A book of the screenplay was also published, which contains photographs and illustrations from the making of the film.

The series is set in a time period Terry Pratchett described as 'late Georgian without the Late George'. Marc Warren's turn as the unhinged villain Teatime was inspired by Johnny Depp's performance in Charlie and the Chocolate Factory (2005). There are a lot of characters, and this inevitably means that some are less well defined than they are in the book; for instance, the only wizards of Unseen University to have any discernible character are Ridcully and Stibbons, yet the visualisation of Hex is a joy to watch.

The opening sequence showing Great A'Tuin swimming through space looks like it came straight out of the Cosgrove Hall animated adaptations. The second episode's opening is identical to the first, presumably in order to use an expensive effects shot twice as it makes no narrative sense.

The background music is not as accomplished as in the Cosgrove Hall animations. It is certainly incredibly festive; however, it is somewhat repetitive. Strangely, when Bilious awakens from his hangover, the background music loudly, and stirringly, plays what can only be described as 'Men of Harlech'2 with an occasional duff note. 'Men of Harlech' is of course a very fine tune and its inclusion in the film Zulu is one of British cinema's defining moments, but quite what is it doing in Hogfather? Is it simply there because the actor playing Bilious is Welsh?

One of the joys of Hogfather is seeing a new perspective on time-honoured Christmas traditions. So instead of drinking sherry, eating mince pies and having a carrot for the reindeer like Father Christmas, the more porcine Hogfather drinks sherry as per normal, but he eats pork pies, and as his sleigh is pulled by pigs, they are given onions instead. Death is the heart of the story, the heart who understands what the season is truly about and relishing the chance to do more than free souls from their mortal coil at the end of their lives. Seeing him question the 'socio-economic factors' that means that rich children get expensive toys, poor children get cheap toys and poor little match girls die lonely in the snow is a well-timed wake-up call for the audience to remember the less fortunate at this time of year. Yet rather than be a lecture, this lesson is wrapped up in a story which sees him struggling to remember to say HO HO HO and not COWER, BRIEF MORTALS!. David Jason as Albert completes the double-act, although perhaps too much attention is spent on his smoking habit.

1Two 90-minute episodes when viewed on DVD without adverts.2'Men of Harlech' is a song about the seven-year siege of Harlech Castle from 1461-1468 during the Wars of the Roses. Harlech Castle, a World Heritage Site, is in North Wales and the historic song commemorates Welsh bravery.3The awards were for Television Interactivity and Special Effects.