Mince Pies Content from the guide to life, the universe and everything 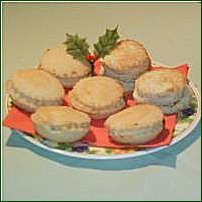 Mince pies today are small covered tarts filled with mincemeat made from dried fruit, candied peel, spices and a little brandy or alcohol. This wasn't always the case, though.

The earliest mention of how to make a mince pie, from circa 1615 mentions, amongst its ingredients, two rabbits, two pigeons, two partridges, a hare, a pheasant, a capon, the livers of all these animals, as well as eggs, pickled mushrooms, dried fruit and spices. The whole thing was made into a huge pie, sometimes weighing as much as 220lb (100kg) and held together with iron clamps. The pastry used was either puft past or short past - the forerunners of modern puff pastry and shortcrust pastry. They tended to be oblong or square and were also called Crib Pies, because they sometimes had a pastry figure representing the baby Jesus placed on the top.

As with most Christmas Fayre they were banned during the rule of Oliver Cromwell and, by the time they re-emerged, had altered their shape and content to become the more familiar pie known now. Over the years they shrank in size and it became a tradition to hand them out to visitors, leading to their alternative name of Wayfarers Pies. It was considered lucky to eat 12 pies in 12 different houses during the 12 days of Christmas.

To make mince pies from scratch it is necessary to make the mincemeat mixture a few weeks beforehand to allow the fruits to absorb the liquid and mature. Alternatively you can skip this part and buy one of the ready-made mincemeat mixtures available in shops and supermarkets. If you are pushed for time you can also buy ready-to-use puff or shortcrust pastry or shop-made mince pies. If taking the latter route make the mince pies taste more homemade by pricking with a needle, pouring a little brandy or fruit liqueur into each one, brushing with egg yolk and dusting with caster sugar before reheating.

The most widely used forms of pastry for mince pies are Puff, Rough Puff and Shortcrust. Shortcrust is the easiest to make and Rough Puff is a richer variation of Puff. Flaky Pastry is not suitable as the moisture of the mincemeat makes it collapse and break.

The basic tricks for making good pastry are:

Allow plenty of extra flour for use on the pastry board as this pastry is very rich and sticky. In a warm environment place the pastry in the fridge for 10 minutes between each rolling. Work as quickly as possible using hands cooled under the cold water tap.

This version takes even more rolling than the Rough Puff version and relies on making a good basic dough before adding the fat. Keep the butter in the fridge until required and squeeze it in a clean tea towel to remove excess moisture.

This is the most commonly used pastry and probably the easiest to make. The proportion of fat to flour is much less so it tends to be simpler to handle and more reliable in outcome.

Baking powder can be added or self raising flour used without detrimental effects. If required, a teaspoonful of sugar can be added with the dry ingredients for a slightly sweeter taste.

The best cutter to use is one specially designed for making small covered tartlets. It has two edges, one slightly smaller in diameter than the other and the resultant circles fit into a regular bun or patty tin perfectly.

Non-stick, fluted, bun or patty tins are best but, if these are not available, prepare the tins by greasing and flouring for easier removal of the pies. The proportions given here are enough for at least two batches, so more than one tin is preferable. If a large pie is preferred use a flan tin inverted to mark out the size of pastry needed for the base. Turn it base down to cut out the lid. Allow 20 to 25 minutes for cooking a large pie.

Mince Pies may be safely frozen using the 'open freeze' method and defrosted at room temperature or in an oven or microwave.

Serve either hot3 or cold, on their own or with custard, cream or brandy butter.