'Truckers' - the Television Series Content from the guide to life, the universe and everything 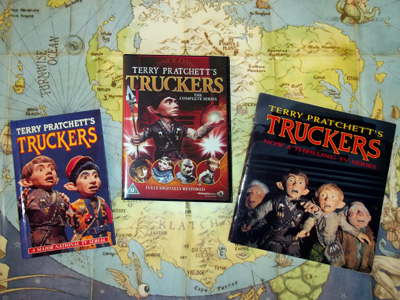 You know the words of Arnold Bros (est 1905)! 'Everything Under One Roof.' Everything! Therefore there can be no Outside.

Masklin, Grimma and Granny Morkie and Old Torrit are the only surviving Nomes who live next to a motorway. Nomes are small people about four inches tall who move, walk and talk ten times faster than humans. After seeing their friend Mr Mert being eaten by a fox, Masklin guides them on to a lorry which takes them to an old department store, called Arnold Bros (est 1905). They carry few possessions, but take with them an old relic they call the Thing, which is really the navigational computer and flight recorder of a spacecraft that brought their distant ancestors to Earth 15,000 years before.

Inside the store they find a colony of Nomes whose religion is based around worshipping Arnold Bros (est 1905) and interpreting the store's rules and regulations as gospel. For instance, as the store's slogan is 'All things under one roof', the Store Nomes do not believe in the existence of anything outside. The Nomes live in perpetual fear of a fearsome monster called Prices Slashed, while Bargains Galore! is a common exclamation.

The Nomes are divided into different tribes reflecting the store's different departments, with only the Stationeri, the store's priesthood, allowed to read. Other tribes include the del Icatessen who rule the food hall, the Ironmongri who use tools and electricity, the warlike, brightly-dressed Haberdasheri and their enemies the Millineri and Corsetri bandits. When the Nomes learn from the Thing that the store is due to be demolished, these different tribes must, for the first time ever, all work together in order to steal a lorry and flee. For as Arnold Bros (est 1905) has said, Everything Must Go!

The television series follows the plot of Sir Terry Pratchett's novel quite closely. There are a few minor changes, though these are within the spirit of the original story. For instance, in the series in the beginning one of the Nomes named Mr Mert is seen being caught by a fox despite Masklin fighting the fox and attempting to rescue him, while in the novel his death by fox is reported to Masklin when he returns from foraging for food.

Everything Must Go
- The Book of Nome

Truckers was made by Thames Television's animation studio, Cosgrove Hall, and produced by Brian Trueman at the end of a golden age of British fantasy adaptations1. Truckers was broadcast between January – April 1992, the same year as the BBC's The Borrowers2, which also featured the exploits of small people.

Cosgrove Hall was the animation studio most famous for such childhood classics as Danger Mouse and Count Duckula. It was very close in style to their other stop-motion classic The Wind in the Willows3 (1983-1990), which also featured Michael Hordern. Thames Television had been formed by a forced merger by the ITA4 of two ITV companies, ABC5 and Associated-Rediffusion in 1968. Thames were granted the lucrative London weekday ITV franchise and soon gained a reputation for making outstanding programmes.

Controversially, Thames Television lost the franchise rights to the London area, which from 1 January, 1993, was instead covered by Carlton. Although Thames Television had intended Truckers to be merely the first series in a trilogy, after losing their franchise, the plans to cover the remaining two books in Terry Pratchett's Bromeliad trilogy were abandoned.

The series consists of 13 ten-minute episodes, each beginning with a reprise showing what has gone before and an introduction by The Thing. This narration is very similar in style to that of The Book in The Hitchhiker's Guide to the Galaxy television series. When Truckers was released on VHS it was edited into a feature-length omnibus edition, although the DVD release has restored the original episodic format.

A picture book novelisation based on the television series based on Terry Pratchett's book was released by Corgi books in 1992. This adopts a graphic novel format, using stills from the episodes and speech bubbles to tell the story. A Ladybird book was also released at the same time, using a combination of sentences and pictures.

Truckers would not be the last Terry Pratchett adaptation that Cosgrove Hall would animate. In the 1990s the studio animated two full Discworld novels, Soul Music and Wyrd Sisters, following a pilot episode entitled Welcome to the Discworld inspired by Reaper Man. Debra Gillett, who played Grimma, would play Susan in Soul Music.

Since 2001, DreamWorks Animation has owned the film rights to Terry Pratchett's Bromeliad trilogy.

1Since The Box of Delights in 1984, numerous children's novels in the fantasy genre were adapted for television, including perhaps most famously CS Lewis's Narnia novels.2Based on Mary Norton's novels The Borrowers (1952) and The Borrowers Afield (1955) and broadcast in November 1992. It was followed in 1993 by The Return of the Borrowers, based on The Borrowers Afloat (1959) and The Borrowers Aloft (1961).3Danger Mouse and The Wind in the Willows can both be briefly seen on the televisions in the store's home entertainment department.4The Independent Television Authority founded in 1954. This was replaced by the IBA (Independent Broadcasting Authority) in 1971, which was replaced by the ITC (Independent Television Commission) in 1991 which in 2003 was replaced by Ofcom.5Initially Associated British Cinemas, later Associated British Corporation, not to be confused with the American Broadcasting Company or Australian Broadcasting Corporation etc.