'The Box of Delights' - the Television Series Content from the guide to life, the universe and everything 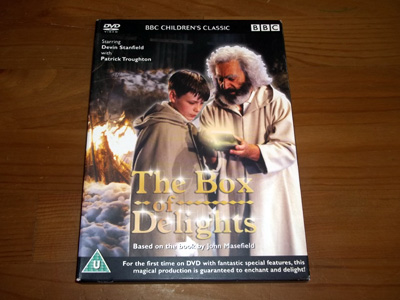 Joyful and triumphant, The Box of Delights was the BBC's magical 1984 award-winning six-part children's drama, based on the classic novel by John Masefield. Set in the days leading up to Christmas 1934, a young boy named Kay Harker travels home from school for the holidays and helps a Punch and Judy man stop the forces of evil gaining possession of a wonderful, magical artefact, the Box of Delights.

Soon dreams and reality, Christianity and Paganism, and aeroplanes and cars all become mixed, as Kay, trying to keep up with his cousins the Joneses, learns that the wolves are running and no-one is safe from being scrobbled. Are thieves really disguised as curates? Will Kay enjoy his jorum of posset? Will Tatchester Cathedral's millennial Christmas Celebration be cancelled?

Christmas ought to be brought up to date. It ought to have gangsters and aeroplanes and a lot of automatic pistols.

On the train home from school, Kay Harker meets a couple of curates from the Chesters-under-Hope theological college. They seem strangely interested in the contents of his wallet and soon after this he notices that his pockets have been picked. He also loses his ticket, but it is found by a mysterious old Punch and Judy man called Cole Hawlings. Hawlings warns Kay that wolves are running, new wolves with new magic who are after his old magic, the Box of Delights.

Learning that his friends the Jones children will be staying with him over Christmas, Kay invites Hawlings to perform his show at his home, Seekings, outside the village of Condicote near the town of Tatchester. Aware that an evil gang headed by Abner Brown are outside Seekings, Hawlings escapes by using the magic of the Box. He leaves at the same time as Tatchester Cathedral's staff, who had been outside carol singing. Suspecting that the Cathedral staff have been given the Box to look after, the gang begins kidnapping, or 'scrobbling' them all, from the Bishop down to the very last choirboy. Soon Kay's guardian, Caroline Louisa, and friend Peter have disappeared too, Cole Hawlings has been kidnapped, leaving Kay to guard the Box while Abner begins summoning demons.

If I was to see someone I was to tell him that someone is safe.

The Box of Delights starred Patrick Troughton as Cole Hawlings. Troughton was an actor with extensive experience in portraying a mysterious time-travelling man with a magical box, having been the Second Doctor in Doctor Who. Kay Harker was played by Devin Stanfield, who had previously played Colin in Thames Television's 1984 adaptation of John Wyndham's Chocky.

The Midnight Folk is a novel by John Masefield, featuring Kay Harker searching for the long-lost treasure entrusted to his grandfather that was stolen and had disappeared. Also looking for the treasure are characters who would appear in the sequel, The Box of Delights, including:

The television adaptation takes place following the events of this novel and the viewer receives little introduction regarding these characters or their relation to Kay. Curiously in The Midnight Folk, Kay has stuffed toys called Peter, Susan, Jemima and Maria.

The Box of Delights is a far stronger novel than The Midnight Folk, written by a poet laureate at the full height of his literary powers. Indeed, even the contents page is a joy to read, telling the story of Kay's journey and ending in triumph, leaving the reader eager to learn the story.

Differences from the Novel

There are several differences between the novel and the television serial. Most of these simplify the novel or cut down on the magic, saving on special effects. Other changes are made to ensure that each episode ends on a dramatic cliffhanger. Also in the novel, almost every character at some point or other likes to recite short poems or sing little songs. These are almost completely absent from the serial.

That's the time that likings are made

The Box of Delights was one of the BBC's prestigious television productions of its 1984 autumn season. It cost £1 million to make, with the series pre-sold internationally in order to raise this amount. The series was particularly popular in America, where it was broadcast in a primetime slot on 215 stations. In the UK the serial was heavily advertised. Despite being a children's drama it had the prestige of being on the front cover of the Radio Times in an issue that devoted a three-page spread to the serial. It was also promoted during the children's television programme Blue Peter (1958+).

The Box of Delights was the most ambitious series made by Children's Programmes to that point. Unlike most children's television dramas of the time which were predominantly studio-based, the series was made on real locations, including the Severn Valley Railway and the Dudley Narrowboat Canal.

As the story required snow, the production team's priority was to contact the Weather Centre to find out where snow was most likely to be found for five days' location shooting. They were told that statistically the area east of Aberdeen on 27 January was the time and place most likely to have snow in Britain. When the director went on a location recce in early 1984, no snow had fallen in the area. So an expensive snow-making machine was ordered and told to proceed to Scotland. Yet the night the director arrived in Scotland, a tremendous blizzard hit the country, leading to the cancellation of all flights for a week and stranding the film crew, including the snow-machine, south of the Scottish border in Carlisle. This led to the cancellation of two shooting days, leaving only three days available to shoot the snow scenes. Yet with five feet of snow on the ground, almost all the snow scenes were shot in the grounds of the hotel they were staying in as all the roads in the area were closed. Despite these problems, the snow footage remains stunning, complete with a perfect, pink sky.

Director Renny Rye described his thoughts on adapting the novel with the words:

The difficulty in this sequence was not helped by the loss of two days filming. Though scenes of the horse approaching the stockade besieged by wolves were filmed in Scotland, there was not enough time to complete the sequence. The 300-foot palisade stockade was later re-erected outside Reading in June, with foam sprayed on the ground representing snow.

There were only two wolves in the series, as only two wolves, named Quentin and Queenie, had extensive film experience in Britain. They were joined by Belgian Shepherds dyed grey in order to be disguised as wolves; like the real wolves they were veterans of horror film Company of Wolves (1984).

The developments in special effects1 allowed the BBC to combine their deserved reputation for period drama with new techniques that brought magic into the audience's home, transforming televisions into boxes of delight. Techniques included the use of blue screen2 to combine action with animation or other live-action sequences. These sequences combined live-action with animation on videotape in a way that hadn't been seen before.

Not everything was either animated or a digital effect. Eastnor Castle, which was used as the location for the fictional Chesters College, was damaged by special effects man Tom Harding. Live explosives were set off at the bottom of one of the castle's turrets, only for them to blow a hole in the tower's ceiling. For the scenes in which Kay has 'gone small', shrunk to a height of three inches, a periscope was built to keep the camera view three inches off the ground, thus staying at Kay's eye-level.

The serial was broadcast at 5:10pm every Wednesday in the six weeks leading up to Christmas. The 5:10pm time slot was chosen as it was felt that at this time not only would children still be watching, but adults returning home from work would be able to watch too. The final episode was broadcast on Christmas Eve 1984, exactly 50 years after it was set. As Alan Seymour, who had adapted the story for television, said:

Everything that's been done visually, the performances and the music in the background all ties up to create a wonderful Christmas atmosphere at the end.

The magical title track is based on the third movement of Christian Victor Hely-Hutchinson's Carol Symphony, 'Andante quasi lento e cantabile'. It begins as the slow, sinister overtones of 'The Coventry Carol' give way to his celebratory adaptation of the magical 'The First Nowell'.

The Lion, the Witch and the Box of Delights

Masefield's novels involve talking animals, especially a cat, witches and a magical box which can be entered to transport the hero to a magical woodland where Herne the Hunter, a half-man, half-stag, lives. In 1950, CS Lewis's first Narnia story The Lion, the Witch and the Wardrobe was published. This involved talking animals, especially a lion called Aslan, a witch and a magical wardrobe which is entered to transport the heroes to a magical woodland where a half-man, half-goat faun lives. Just as when Kay returns from the magic land inside the box he discovers little time has passed, the same is true when Lucy returns from the world inside the wardrobe. Both The Box of Delights and The Lion, the Witch and the Wardrobe feature children called Peter and Susan, involve long voyages through snow, magic, witchcraft and at the end the magic transports them back to the beginning. The Box of Delights influences later Narnia novels too. Just as Cole Hawlings enters a painting to escape the wolves, Voyage of the Dawn Treader begins with a painting of a ship coming to life.

The phenomenal success of The Box of Delights led to the BBC making more big-budget fantasy adaptations of British children's novels for television. These adopted the serial format and were typically nostalgically set in the early 20th Century and involved occasionally one, usually more, upper-class children encountering something magical:

By the early 1990s, British children's television viewing habits moved away from watching adaptations of classic novels. Instead, the programmes most-watched by children were Australian soap operas, especially Neighbours and Home and Away. Following this example, British children's television dramas moved away from fantasy and concentrated more on using the soap format, with programmes such as Byker Grove (1989-2006) and Grange Hill (1978-2008). As these were series rather than serials, they were cheaper to produce as they used the same sets week after week.

1Especially Quantel Paintbox, continuously used by Doctor Who throughout the 1980s.2Known as Chromakey or Colour Separation Overlay by the BBC.3Known in America as The Sand Fairy.